What Prevents Delayed Choice Quantum Eraser Experiment from Being Used to Predict the Future?

Reading about the DCQE experiment commentary by Ross Rhodes.

My question is: why can't information about the future state of the idler photon (the one that heads toward the Glen-Thompson prism) be gleaned from the D0 detector in order to enable "predictions" of the future?

I'll preempt any "because that would violate conservation of quantum information" responses by saying, yeah, that's why I'm asking this question. I'm certain there is something I don't understand and I'm hoping someone can help me understand it.

I've seen these other questions:

Can post-selecting on the screen in the Delayed Choice Quantum Eraser experiment be used to predict the quantum-eraser measurement results?

Delayed Choice Quantum Eraser: Am I missing something here?

Are photons locked in time, and does this explain the "delayed choice quantum eraser" experiment?

Either none of them answer the exact question I'm asking, or (more likely) I'm not understanding the answer. I'm sorry to drag people through the explanation again, I'll do my best to propose a simple modification to the experiment which you can tell me the outcome of, your answer will help me understand.

Since DCQE seems to have a tendency to attract magical thinking (myself included), hopefully, this can be asked and answered clearly enough to dispell the magic and uncover the mechanics.

The experimental setup is this: 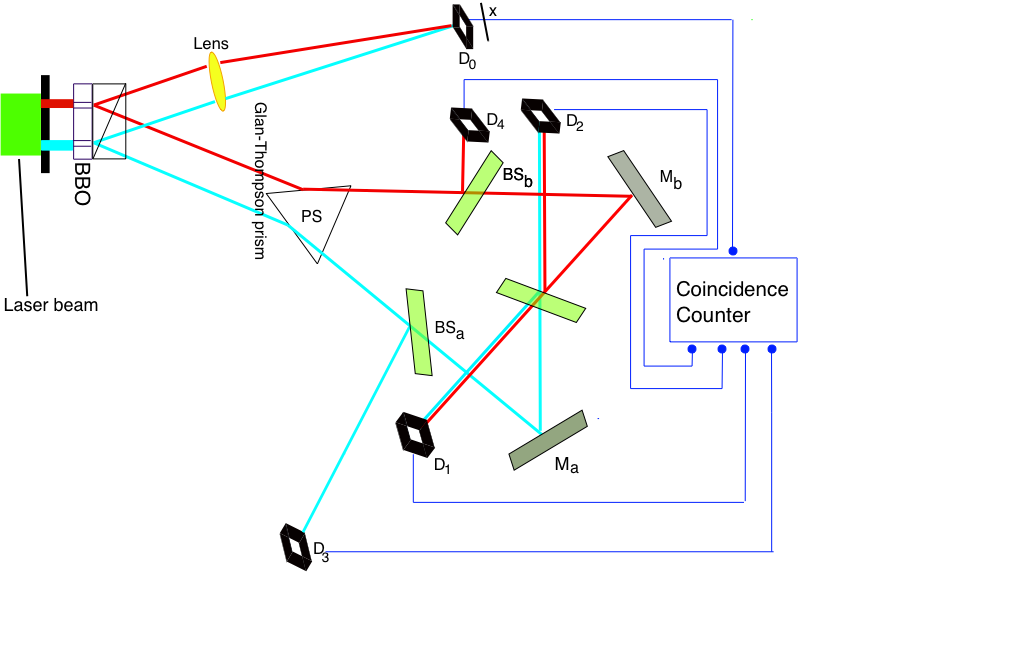 A photon is sent through a double-slit where it passes randomly and then is split into two entangled photons. The upper entangled photon (signal photon) hits the D0 detector where its x position is recorded. The second photon (idler photon) goes down to the lower part of the diagram where it either is reflected into D3/D4 by BS (which gives us information about its path) or it passes through to another reflector (unlabeled in the diagram) that destroys its path information.

If that explanation doesn't make sense, here is a video that explains the experiment. Fair warning, it devolves into magic at the end, but prior to that, I found it to be helpful.

Whenever a photon is detected by D4 or D3 we should get a "clumping pattern", rather than an "interference pattern" (that's the terminology used in the video, I don't know if it's correct) because we know about the photon's path. If it hit D4 then we know it came from the lower slit (blue line) and if it hit D3 it came from the upper slit (red line).

The Grand Reveal, amazingly, is that the result from D0 will also show that clumping pattern! Somehow, even though D0 happens before D4 or D3 it "knew" that its entangled twin was going to be detected before it even happened.

The reason I think this is an error is that if it were true DCQE could be used to create a future predictor, which either means all the quantum physicists in the world should already be billionaires, or I'm missing something (I wonder which one).

To demonstrate this, here is the same experiment with only the eraser (I removed BSa and BSb and labeled the final reflector BSc): 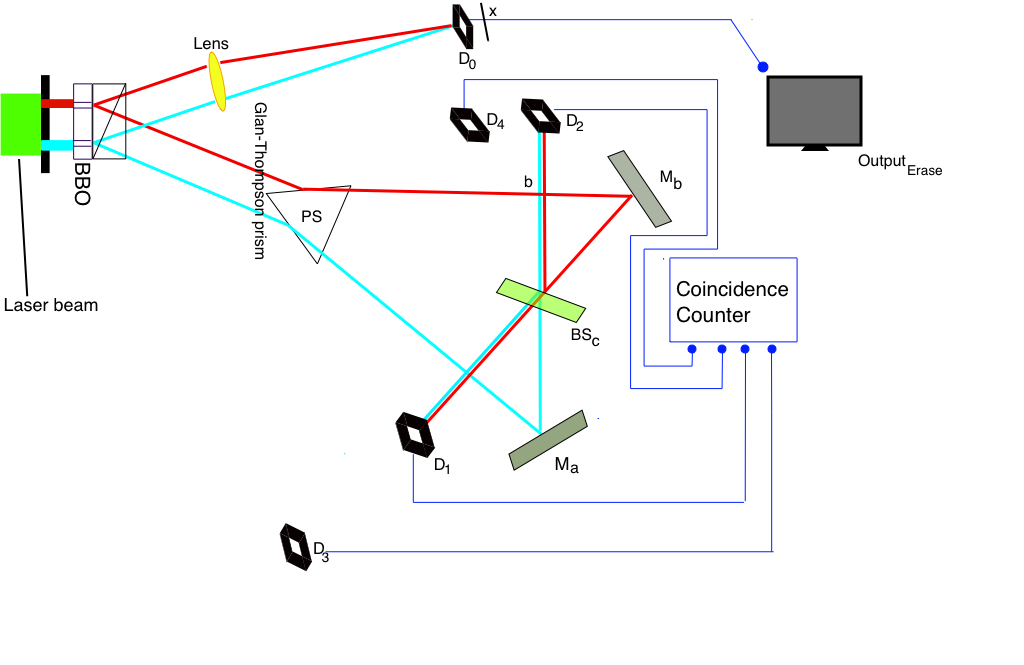 Let's call this Eraser Mode since all it does is erase our knowledge.

In the top-right corner, I have connected the output of the D0 detector to a monitor where we will plot the x impacts.

If the video and (my reading of) the commentary are correct, then since I do not have information about the path that the photon took, I should see an interference pattern on the ${Output}_{Erase}$ display.

This, I'm guessing, is not true and is another hole in my understanding. Rather, the Coincidence Counter must be what enables the creation of the interference pattern, but the article seemed to indicate that the detector itself shows that pattern.

Here is the experiment again, this time with just the Eraser removed (the one I labeled BSc) and only the signal reflectors remaining: 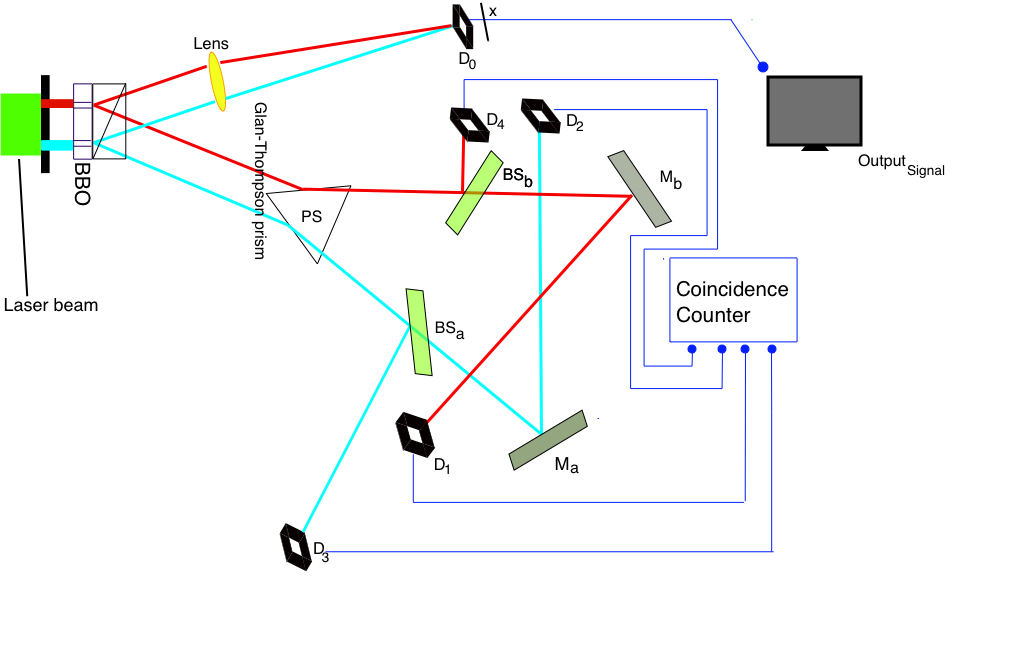 Let's call this Signal Mode since regardless of how the experiment plays out we can figure out which slit the photon went through (D2 or D3 is bottom, D1 or D4 top).

I've also connected the output of this system to a display named ${Output}_{Signal}$.

It could be an interference pattern (artist's rendition, be gentle): 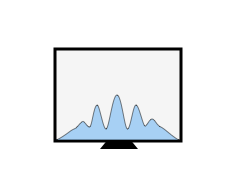 Or no interference pattern: 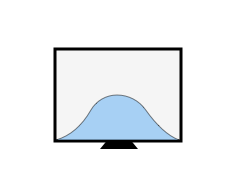 Or something else, because I don't understand.

The problem is that if there is a different pattern on ${Output}_{Signal}$ than there is on ${Output}_{Erase}$ then I could use that to predict the future. 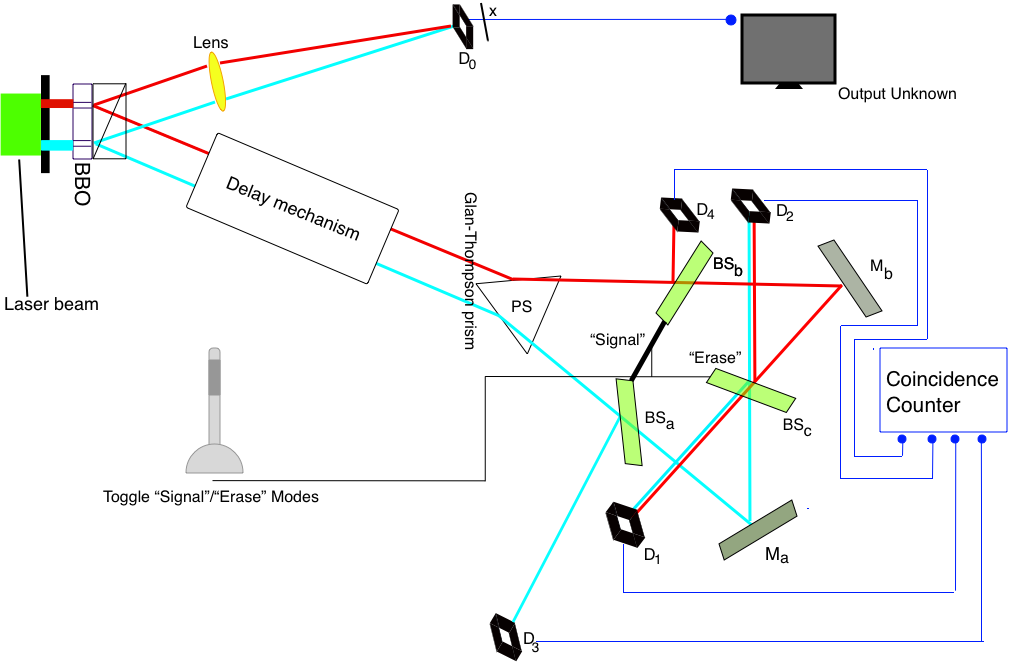 I could set up a delay mechanism between the Glenn-Thompson prism and the BBO so that it takes a long time for the photon to make it to the prism. Let's say I send it through 120,960,000,000 km of fiber optic cable (a cable so long that it could go around the equator >3 million times) so that it takes a week for the photon to make it from the BBO to the prism (assuming the speed of light in the cable is 200,000 km/s). In the meantime, I can measure the pattern on the D0 detector.

Of course, then I can get up to all sorts of shenanigans by, say, writing a script that flips the switch if Bitcoin ever goes over 10k in that week (or whatever).

This future prediction trick makes me pretty sure that my understanding is incomplete. In particular, I think the gap is in understanding how the coincidence counter uses the incoming data to create the interference pattern.

If that's the case, then I'm not that impressed by this experiment. I mean, essentially it's saying, "From the parts of the system where we have more information, we can get more information about the system." Or am I also missing something there?

Probably the easiest way to answer this question is to tell me what pattern I will see at the D0 monitor.

It does not matter what you do to the idler photons, the output of D0 in both cases (Signal Mode and Eraser Mode) will be this:

Take a look of how R01 and R02 are dislocated from one another. If you add both signals together, you get R01 + R02 = D0. Notice how the peaks of R01 align with the troughs of R02, such that the final result is the value in D0. This mode results in an interference pattern only because you can sort between the photons of each sensor.

As you can see, looking at D0 will not help you get any future predictions, since it will always yield the same result, no matter what you do to the entangled photon. The patterns only emerge after the coincidence counter sorts which photon went to each sensor.

Not the answer you're looking for? Browse other questions tagged quantum-mechanics quantum-information quantum-eraser or ask your own question.