What would happen if you put a large bucket of water in an enclosed vacuum?

Imagine a $1$ meter airtight cube at room temperature with a large bucket of water in it.

What would would happen if you removed all the atmosphere?

I know the water would evaporate, but eventually wouldn't the evaporated water raise the air pressure so the water no longer evaporates?

Since the water is at room temperature I would think the water in the air would condensate, but the water condensing would also lower the air pressure.

How would this actually work?

Actually a dynamic equilibrium will be attained where the rate of evaporation will be equal to the rate of condensation.

It is to be noted that the rate of evaporation remains nearly constant if the water is kept at the same temperature and the surface area is the same. However the rate of condensation will increase and as I've said before, a dynamic equilibrium will be reached. 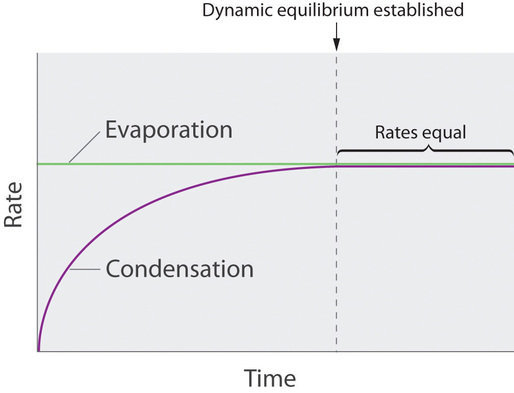 Not the answer you're looking for? Browse other questions tagged vacuum equilibrium evaporation condensation or ask your own question.