Why is the Kelvin scale formed using the triple point of water rather than the freezing point?

I am trying to learn some thermodynamics by watching the lecture series on youtube by MIT. In the second lecture: https://www.youtube.com/watch?v=TDqx8Zv1rRo&list=PLF6C6594F42ECEE0D&index=2

From 9:00 to 9:45, the lecturer talks about why the freezing point of water as defined in the celcius temperature scale would make a bad second fixed point (the first being absolute zero), to use to interpolate between and create the kelvin scale. This is because apparently water doesnt boil at 0 degrees everywhere, it depends on the pressure being 1atm. He then goes on to say its better to use the triple point of water instead. This doesnt make sense to me since the triple point of water is only 0.01 degrees at 1atm, just as the freezing point is only 0 degrees at 1 atm. What is the benefit of using the triple point?

The triple point of water is not found at 1 atmosphere. The triple point exists at a pressure of $661$ Pa, which is a significantly lower pressure, at a temperature of $0.01$ degrees Celsius. If the pressure or the temperature is higher or lower than that, you will never see all three phases of water at once.

If you look at a phase diagram, you can see what is meant here - the freezing "point" is actually a line, a boundary between two phases. In contrast, the triple point is an unambiguous fixed point - the intersection of the boundaries between the three ordinary phases.

As you can see, there are a bunch of other unambiguous fixed points on this phase diagram - one for every intersection of phase boundaries, plus the critical point. The reason the solid-liquid-vapor triple point is preferred over these is because: 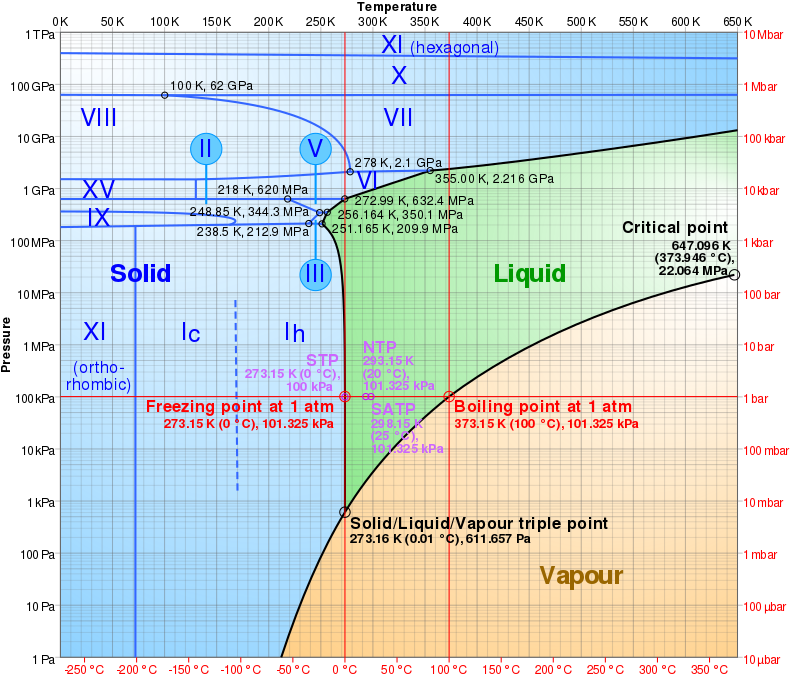 If all you know is that water is melting, you don't know the temperature and pressure unambiguously. You can be at any point along water's Fusion Curve.

If all you know is that all three states of matter are in equilibrium, you know you are at the the triple point designating not an entire curve, but a specific point on multiple curves. 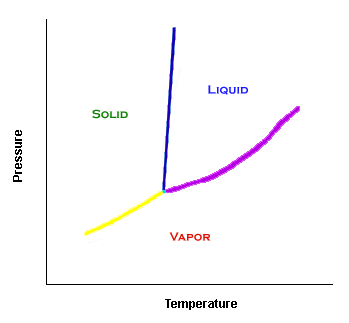 Because the triple point of water is NOT set for 1 atmosphere of pressure: 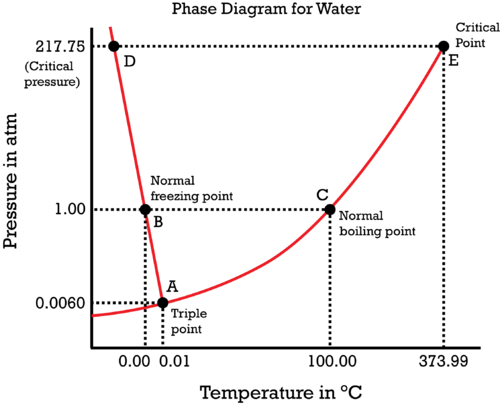 Note how its a diagram of pressure against temperature, and whilst not to scale at all, it does paint a picture.

Not the answer you're looking for? Browse other questions tagged thermodynamics temperature scales or ask your own question.

5
How do Temperature Scales work?
1
Triple point temperature and freezing point
5
Are there reasons for the discrepancies in absolute temp units - Kelvin vs. kelvins vs. degrees Kelvin?
18
Hot water freezing faster than cold water
3
What actually makes boiling happen?
29
How is temperature defined, and measured?
1
Is the triple point of water exactly 0.01 $\deg$C?
0
Why is the triple point of water defined as 0.01 degrees Celsius and not 0?
0
Why does the metric system use the Celsius scale rather than the Fahrenheit scale?