What is the physical explanation for energy transport in simple electrical circuits?

Keeping it simple, what is the physics approach to a current in a wire connected to a battery? How does the electric field behave?

I've read somewhere that, contrary to the common conception, electrons don't really flow as water in a hose so, what is really going on there? How is energy transported at the speed of light if electrons don't flow like very fast water?

Let me reply with the hydraulic analogy, i.e. with replacing electrical current by water flow.

Open the water tap in your kitchen. Then water comes out instantaneously, although the waterworks feeding the water pipes might be many miles away from your house.

Of course, this is not surprising. Before you opened the water tap, the water was already present in the pipes all the way from the waterworks to the water tap in your kitchen. It is the pressure, not the water, which propagates so fast (theoretically with the speed of sound) through the pipes.

This water scenario above is very much analogous to the electrical scenario.

When you switch on the light in your room, the electrical current through your lamp begins to flow instantaneously, although the electrical power station might be hundreds of miles away from your house.

This is not surprising here, too. The electrons were already present in the wires all the way from from the electrical power station to the switch and the lamp in your house. It is the voltage in the wires and the electromagnetic field around the wires, not the electrons, which propagate so fast (theoretically with the speed of light).

Below is an illustration I made of this, based on a reasonably realistic simulation of a simple DC circuit with a rectangular shape. 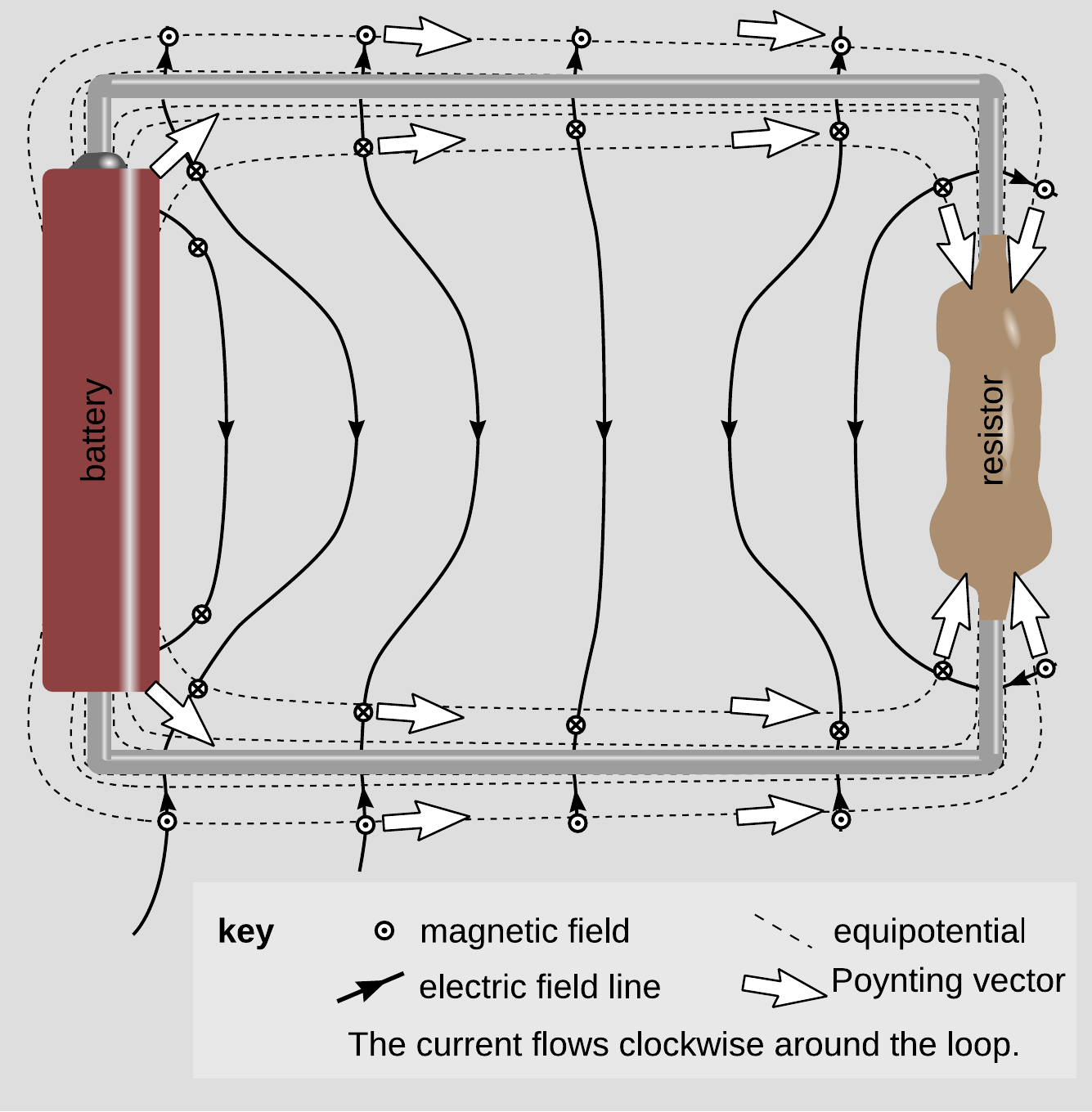 The energy does not flow in the same direction as the current -- if it did, then just as much energy would flow out of the resistor as into it. Actually, the battery is using up its chemical energy, and the resistor is putting out energy as heat, so the flow of energy from the battery to the resistor is always to the right.

The electrons flow more like very slow water, and this is another way of seeing that energy is not transported along with the electrons. If you open or close a switch in a circuit like this, there are changes that ripple outward in the electromagnetic field. Those electromagnetic waves carry the energy and information at speeds that are usually close to the speed of light.

The best way I ever had it explained to me was that if you imagine a swimming pool full to the top with ping pong balls, and you push one extra ball in at the shallow end, another ball will pop out at the deep end (well, it's a simplified logic-problem view). This is how the electron flow works: one electron will leave the negative terminal of the battery (due to the voltage, or potential difference along the length of the circuit) and enter the wiring. This wire is made up of molecules of copper; the electron will strike a molecule and displace another, which will then strike another molecule, following the flow around the circuit. The original electron itself may take a very long time to propagate around the circuit (or that specific ping pong ball you put into the shallow end may take a long time to leave the deep end). But the total effect of one-in-one-out is preserved.

Put another way, the wire is already filled to capacity with electrons (or the pool with balls) before the switch is closed. Adding balls/electrons at one end (almost) instantly pushes one out the other, but the actual electrons themselves can move very slowly from one end to the other.

Going back to the hydraulic analogy, your house is likely connected to a municipal supply (or dam, bore, whatever) through tens, or hundreds of kilometers of pipeline. Inside this pipe is water. With the tap in your house turned off, the water is under pressure (voltage) within the pipe due to the pumps at the supply/elevation of the dam. When you turn the tap on, water instantly begins to flow. However, this is the water (electrons) which were already in the pipe. If the dam/pump added a red dye to the water, it may take hours for this dye to appear out of your tap, as all of the 'clean' water (electrons) just first be removed from the pipe.

That is an extremely generalised explanation and doesn't cover things like valence bands (electrical conductivity of the molecules) or semiconductor effects (molecules becoming positively charged as they lack an electron) but it serves the purpose as far as explanations go. If you'd prefer a more detailed explanation, I'd recommend obtaining a copy of Neamen, DA 2010, Microelectronics: circuit analysis and design, 4th edn, McGraw Hill, London. Which was the undergraduate text I used, and it goes into all the detail you're likely to need about the 'how'.

0
When AC electricity is generated, how does the current flow?
3
Poynting theorem on an example?

1
Need help understanding a simple circuit in-depth
1
tranfser of electrons between two metals and a wire
0
Where do the charge in a series/circuits (?) come from?
0
Charge accumulation in wire
0
How does 'conservation of law of energy' work in an open circuit connected to a hydroelectric generator?
8
Does an electric current flow in an open circuit?
2
Energy Transport in Circuits (Electromagnetic waves and electrons)
8
Alternate explanation for energy flow in electricity as explained in this video