Are the Properties of the EM Spectrum Fluid?

To put it simply. We group our EM waves into groups such as X-rays, microwaves, visible light etc. I was wondering, if the properties of say, x-rays, slowly change into the properties of say, gamma rays, or as soon as the wavelength is larger than 10 picometers it's properties become that of an x-ray. If it's the former, how do we calulate the standards for identifying a wave.

The EM waves form a continuous spectrum, thus your first description of a gradual change in wave behaviour is correct. However, because of this; there is also no precise way of determining exactly at which frequency a category of EM wave starts or finishes at.

In fact, sometimes the classification of waves can be so hand wavy that the typical description of an EM wave: $$c=f\lambda$$ is treated as a secondary determinant for which category an EM wave belongs to! One such example of this is with X rays and $\gamma$ rays. Their frequencies overlap one another at approximately $10^{18}\:\mathrm{Hz}$ so it is difficult to quantitatively differentiate higher frequency X rays and lower frequency $\gamma$ rays. Instead, we let the origin of the waves decide, $\gamma$ rays are emitted from the nucleus of the atom while X rays are emitted from outside the nucleus; by excited electrons.

To conclude, the EM spectrum can in no way be easily divided into discrete categories and as such there is always some overlap between adjacent categories of wave.

The boundaries between the different spectral regions of the electromagnetic spectrum are 'soft', and indeed there is often overlap between neighbouring bands, which makes for a better representation of the spectrum: 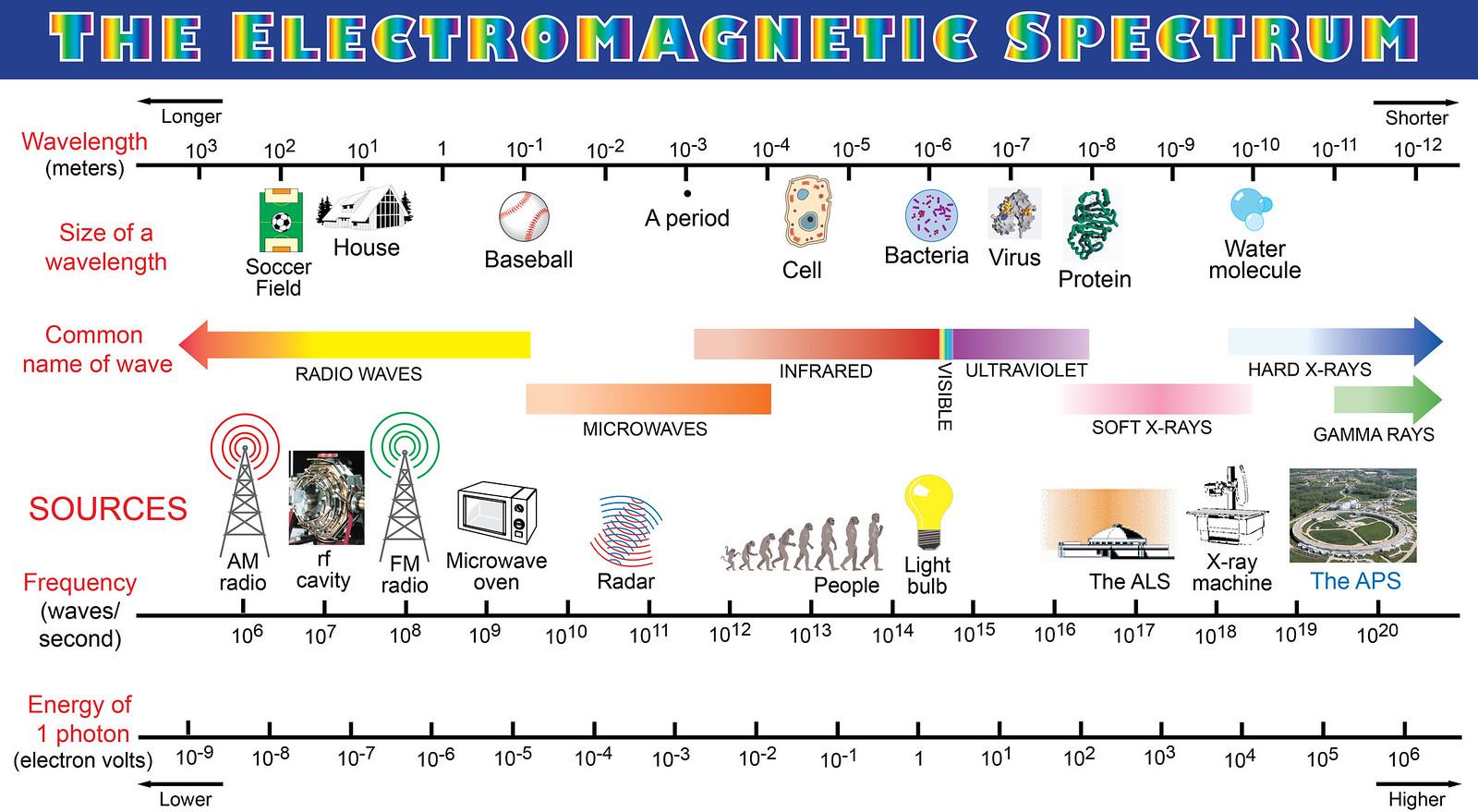 Spectral regions like "infrared" or "soft x-ray" are distinguished by various aspects of the interaction of light with matter at those frequencies, shaping what we can do with them and the equipment necessary to interface with that radiation.

Thus, for example, infrared radiation (roughly speaking) is that radiation that's longer in wavelength than what the eye can see but which can still be manipulated using vaguely "optical" means, whereas microwaves are the kind of waves that you interact with using antennas and metal waveguides. So what do you do if there are wavelengths where (at least for some purposes and on some situations) there are 'optical' methods, but also antennas? The label of whether you want to treat it as IR or as a microwave depends on what you want to do with it.

On the other hand, some of the transitions are sharp, because they need to be sharp to benefit the governance systems of our technological devices. Thus, e.g., the boundary between the VHF and UHF radio bands is sharp at 300 MHz, not because of any specific change in the behaviour of radio at that frequency, but because it is legally advantageous to have clear boundaries between the different bands.

However, none of those transitions are really sharp as regards the physical processes, and there is always a smooth turnover from the behaviour in one band to the behaviour in its neighbours.

For the specific case of gamma/x-rays, one way to look at them is by the relative cross sections of the ways they can interact with matter. Here (from wikipedia) is a graph of such a thing for high energy photons interacting with aluminium: 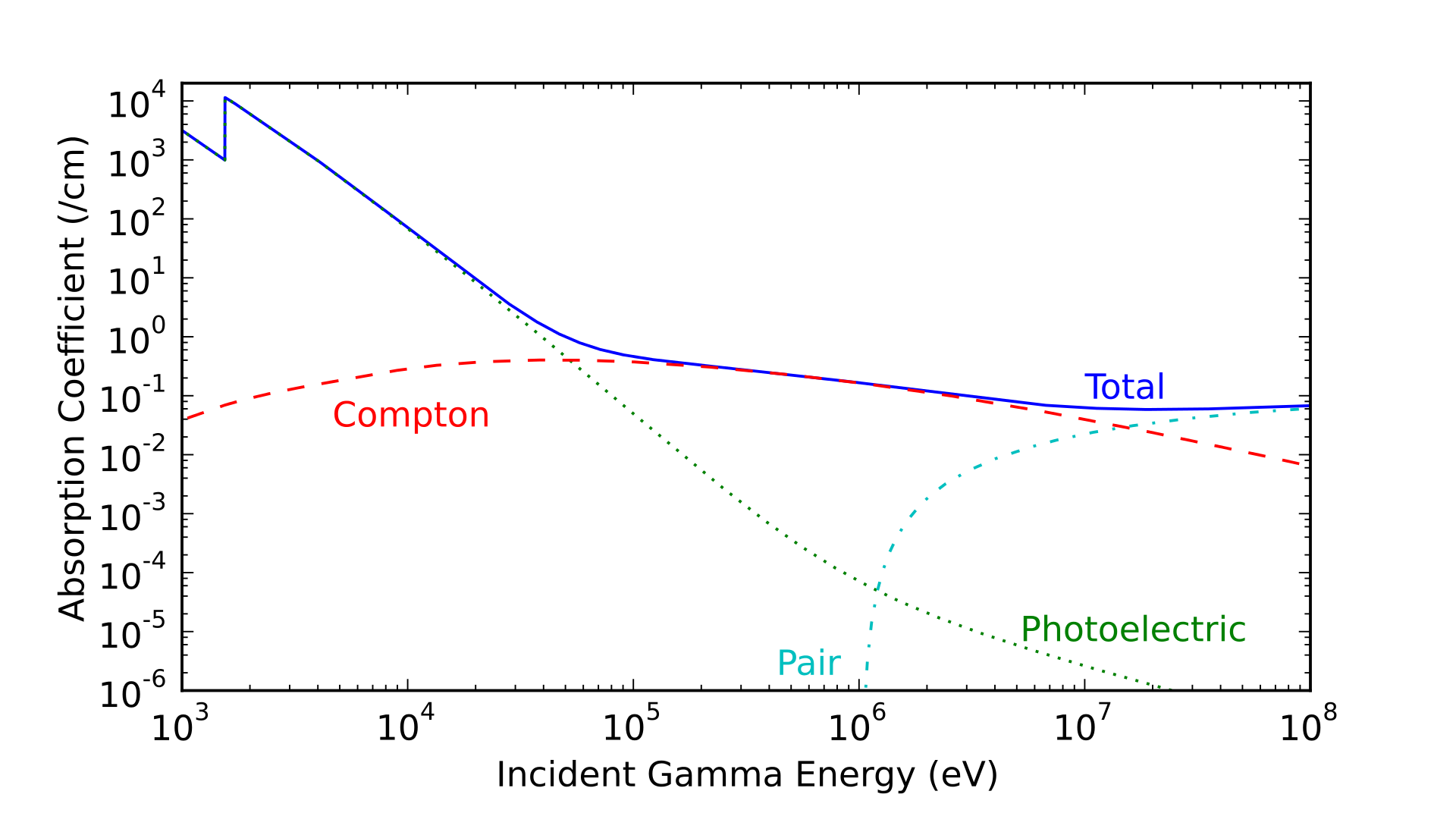 The blue line is the total absorption coefficient, and both axes are on log scales. You can see that at low energy the photoelectric effect dominates: the photon hits an electron and it absorbs essentially all of the energy, ejecting it from the atom. Next is the Compton scattering, which is fairly flat over a huge energy range. This happens when a photon scatters off an electron, losing some but not all of its energy to the electron.

The one hard limit here is the minimum photon energy required for pair production. This is when a photon, in the strong electric field near the nucleus, is converted into an electron and a positron (other particle-antiparticle pairs are possible at higher energies, but this is the lowest energy one). To do this the photon must have energy equivalent to twice the electron mass, $2 \times 511 \space\mathrm{keV}$ due to our old friend $E = mc^2$. The thing that's kind of interesting to me is that although the x-ray/gamma ray distinction varies by field, it seems that no one actually uses this objective hard limit to distinguish between them. Wikipedia claims that astronomers make the cut for x-ray astronomy to gamma ray at $100 \space\mathrm{keV}$, which is an order of magnitude lower.

The point is this is the kind of thing that makes sociologists say that science is a social construct: If there were a society in alpha centauri doing science, would they make a distinction between photons above and below $100 \space\mathrm{keV}$? almost certainly not. There's some physical basis to where we make the distinctions, but in large part it's due to specific quirks of history.

0
What is the lowest energy gamma ray?