Electric field due to a hydrogen atom

Electric field due to two opposite charges

According to the answers in the previous questions,

if you separate the two charges from each other, they will produce a non-zero electric field everywhere in space. (This field will get very weak, but still non-zero, at locations much further from the charges than the distance between the charges)

So, will every atom produce an electric field in space whether negligible or not? If not, why not? Especially the hydrogen atom, with a proton in the nucleus and an electron revolving acting as a dipole.

Especially the hydrogen atom, with a proton in the nucleus and an electron revolving acting as a dipole

This is a problematic way of understanding the hydrogen atom ─ it basically tries to insist on treating it within classical mechanics, and this is doomed to fail. Instead, the hydrogen atom must be treated within quantum mechanics. This introduces a bunch of subtleties, but as an initial answer, you can think of the hydrogen atom as a stationary proton surrounded by a spherical 'probability cloud' in which the electron can be found (if and when you go looking for it).

Since this probability cloud is spherically symmetric, its electric field will completely cancel out that of the proton, and the total electric field produced by the atom will vanish. This is generically the case for all atoms sitting unperturbed in vacuum.

That said, though, it is possible to polarize the atom if it is placed in an external electric field, which will displace the center of the electrons' probability cloud, and that will produce a small dipolar electric field. Furthermore, this can also be in response to the internal charges of a different neutral atom, which will produce a van der Waals force between them. So take that zero-field statement with a grain of salt!

TL;DR: On average, a lone atom (hydrogen or not) is truly nonpolar, producing no net electric field. This is not, however, necessarily true at any given instant, and the momentary generation of weak, transient electric fields by atoms (and nonpolar molecules) turns out to have very important consequences.

@EmilioPisanty's answer gets it right on a basic level - the negative charge of an atom (or molecule)'s electron cloud is distributed continuously over the whole electron cloud, rather than being concentrated in one (or more) discrete electron point charges.

It is also true that, averaged over time, the distribution of electric charge over the electron cloud of a lone atom1 is spherically symmetric, with no permanent net electric field being produced.

Although one might dismiss this as unimportant, it turns out to be anything but. If an atom with such a momentary dipole moment happens to come close to another atom in such a way that its positive or negative pole is pointing at (or nearly at) the second atom, it can then polarise the second atom. 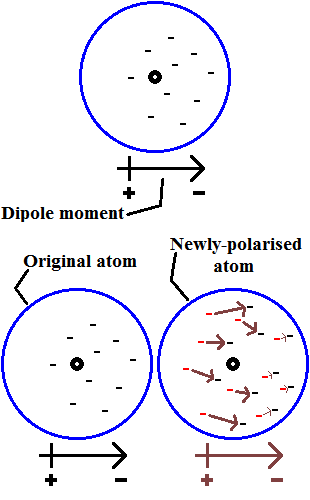 We now have two polarised atoms, with dipole moments aligned head-to-tail. This creates an attraction, known as the London dispersion force, between said atoms; this is the weakest, but also the most ubiquitous, of the van der Waals forces mentioned by Emilio (and the only van der Waals force not requiring the participation of at least one polar molecule or ion).2 Additionally, as this atomic pairing-off does not cancel out the dipole moments of the two atoms, the pair can, in turn, polarise more atoms around them. 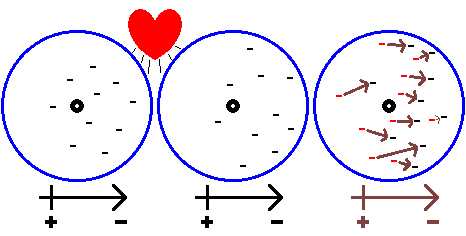 As atoms with more electrons - and, thus, more total charge - in their electron clouds are easier to polarise (especially when the polarising force is weak, like that from a random momentary atomic dipole in an adjacent atom), atoms (and molecules!) with more electrons exhibit stronger London dispersion forces, which is why things like iodine (a nonpolar diatomic molecule with lots of electrons, which is solid at room temperature) have higher freezing and boiling points than smaller nonpolar atoms and molecules, like helium (a nonpolar monatomic gas with only two electrons, which only liquifies when cooled to just above absolute zero).3

1: This train of thought also works for nonpolar molecules, which, likewise, generate no permanent net electric field, but these wouldn't be accurately described as "spherically symmetric".

3: For nonpolar molecules with more than two atoms and containing atoms from at least two elements, an additional method of generating momentary charge separation comes into play; if the thermal flexions and stretchings and vibrations of the atoms in the molecule happen to put most of the atoms of element A on one side of the molecule, and most of the atoms of element B on the other side, this generates a momentary dipole moment even if the charge distributions within each of these atoms' electron clouds remain perfectly symmetrical. This is why (for instance), even though a neon atom and a methane molecule each have ten electrons, neon boils at 27.1 K at standard pressure, while methane's boiling point is a toasty 111.65 K.

The isolated hydrogen atom has no charge and no higher moments except nuclear spin and in the case of deuterium quadrupole moment, and electron spin. Its electric field vanishes with the electron density, except as stated possibly that of its nuclear quadrupole moment.

Not the answer you're looking for? Browse other questions tagged electric-fields atomic-physics hydrogen dipole or ask your own question.

-1
Electric field due to two opposite charges

3
Does there exist electric field around all the substances?
2
Does field line concept explain electric field due to dipole?
1
How does An Electric Field Create a Dipole Moment of a Rydberg Atom?
0
Dipole in electric field
1
Are the electrons and protons electric potential in bonded state are the same as if they are free particles?
2
What happens if the bound electron of hydrogen atom gains kinetic energy exceeds binding energy?
0
Electric field due to group of dipoles