How does a twisted piece of string/yarn wind back on itself? What kinds of forces are responsible for this?

I do a lot of fibrework (carding wool, spinning yarn, weaving, etc.) and I've noticed a funny behaviour that anything long and flexible, which can withstand significant torque exhibits. If I take a piece of yarn and begin to twist it, it remains twisted so long as I keep it in tension (the piece is held straight), however, as soon as I remove that tension by bringing both ends closer to each other, it will begin to wind back on itself (in the same direction as the yarn was twisted). I want to know what physically is going on that causes this. Is anyone able to draw a chart showing where certain forces are pushing/pulling? 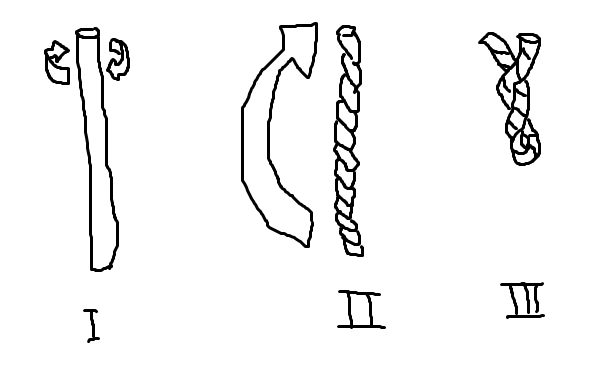 UPDATE: Penguino's answer helps me to understand that the rotation of the thread is in the same direction when the ends are brought together, however, I still don't understand why the individual ends untwisting would cause the ends to rotate around each other.

It is much easier to explain with a diagram than it is with a chart or equations.

Imagine threading tiny weightless disks along your length of blue wool. Twist it and hold it stretched out horizontally between your fingers. Each disk along the length of the wool is rotated a different amount (in a vertical plane) by the twist in the wool - disks at one end are rotated one way, disks at the other end the other way. This is shown by the red arrows.

Now reduce the tension and let the wool sag. Notice (bottom left) that all the disks are now rotated in the same direction (in the horizontal plane) - this is because you have tilted half of them one way and the other half the other way (also shown by red arrows). If this is hard to imagine, it is actually simple to try it out with your own piece of wool and a few little cardboard disks.

So because both halves are now twisted the 'same' way in the horizontal plane the torsion in the wool wants to twist in the same direction to un-twist your wool. (bottom right). All the disks along the wool would rotate varying amounts clockwise (shown by the purple arrows), the bottom disk would rotate in the same direction, and the wool above the bottom disk would twist around itself. Now just imagine the same thing happening with the little disks removed and you will have exactly what you drew in your diagram. 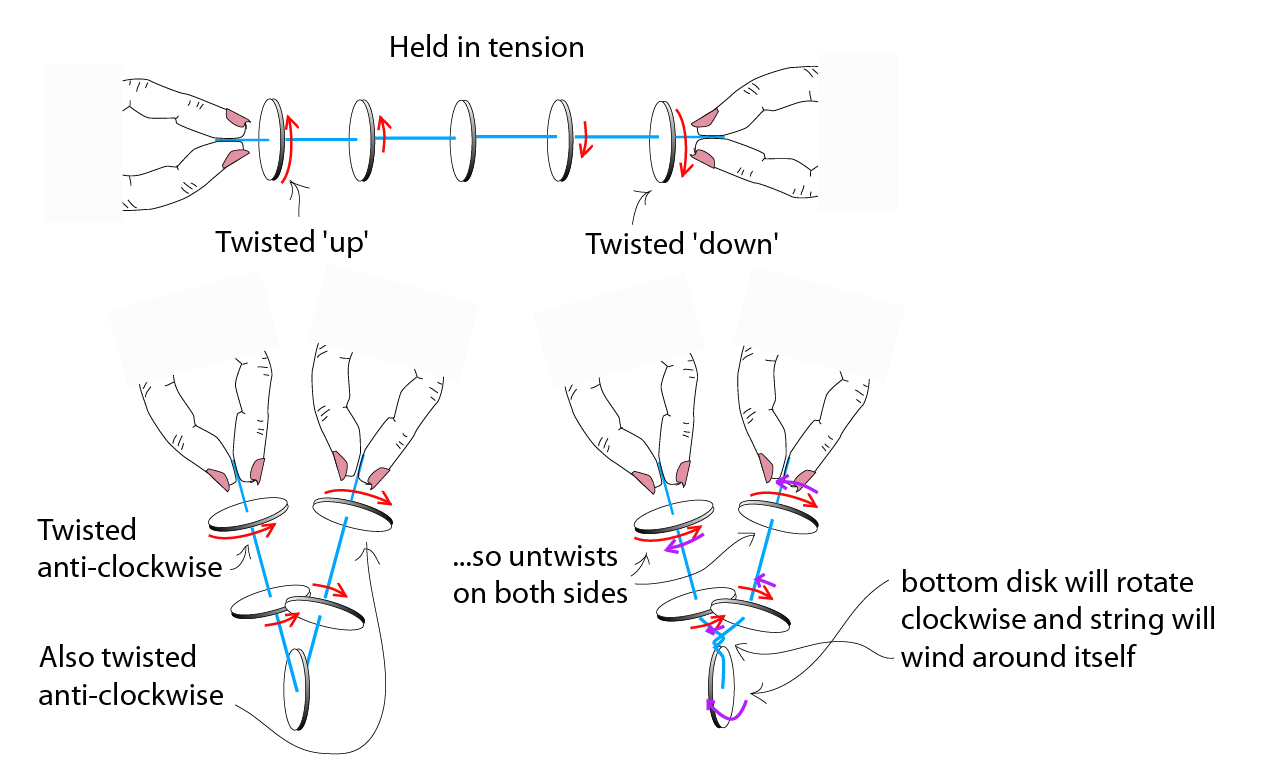 In case there is still some confusion regarding how the wind-back initiates, I have added a second diagram showing local twisting forces (torques) on the individual strands of wool with the 'disks' removed. Cross-section B is at the bottom-most part of the 'loop' of wool where the wool is hanging in the shape of a V, but the same idea would work if it formed a more natural U. 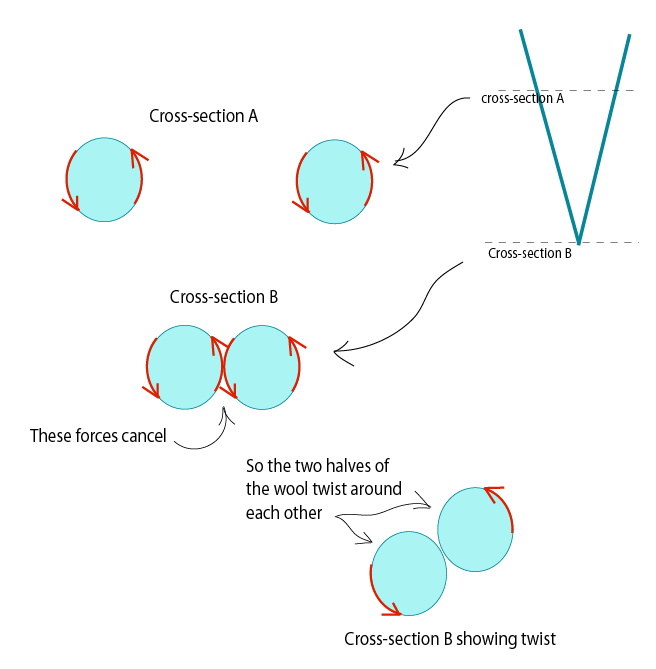 This called a "twist to writhe" transition. It is much studied in biology! See the Wikipedia article "DNA supercoil."

I think it is easier to explain with energy rather that by studying forces. The basic idea is that elastic energy of a flexible cable (or fibre or DNA molecule) can be approximated by $$ E=\int_\gamma \left\{\frac 12 \alpha ( \omega\cdot{\bf t})^2+ \frac 12 \beta \kappa^2\right\} \,ds $$ where ${\bf t}$ is the unit tangent vector, $s$ is the arc-length, the constant $\alpha $ is the torsional stiffness coefficient, and $\beta $ is the flexural stiffness (i.e the energy cost due to bending). The quantity $\omega$ is the rate of twisting per unit length along the cable and
$$ \kappa(s)= \left|\frac {d^2 {\bf r}(s)}{ds^2}\right|= \left|\frac {d{\bf t}(s)}{ds}\right|, $$ is the local curvature -- a measure of how much the cable is bent. Suppose that the cable is twisted $n$ times about it's axis before the ends were joined together to form a closed loop. We say that linking number ${\rm Lk}$ of the cable is equal to $n$.

Not the answer you're looking for? Browse other questions tagged forces classical-mechanics torque elasticity or ask your own question.

13
Why do headphones tangle themselves whereas shoe laces untie themselves?

0
What forces are involved in this situation?
4
Forces as vectors in Newtonian mechanics
1
Why does a Ball bounce back if Forces are Equal and Opposite?
0
What are internal forces and how do you calculate them?
0
Why are conservative forces responsible for elastic collisions?
0
What are the forces acting on this car?
1
Chain slipping off a sphere - Mechanics problem
1
Are the lift and drag force on a wind turbine blade responsible for torque development?
0
How much does string material elasticity affect tension at pitch for a stringed instrument?
0
How to calculate generalized forces for this body?