Why did my thermos flask/jug explode after stirring with a stainless steel spoon?

I always use a thermos jug when making tea. This time I filled the jug with tea leaves and hot water (around 100 degree celcius). I closed the jug and noticed that the tea was too weak therefore I opened the jug and added some more tea leaves and startet stirring gently with a stainless steel spoon. Almost immediately after the glass in the thermo jug exploded.

My husband is sure that it is common sense to not stir with anything in a thermo jug but I have never heard anything about it and couldn't find anything online.

I would really like to know why it exploded and if it applies to all kind of material or only stainless steel/metals? what about a wooden spoon?

At the heart of a thermos jug lies a Scottish invention, the vacuum flask:

A vacuum flask (also known as a Dewar flask, Dewar bottle or thermos) is an insulating storage vessel that greatly lengthens the time over which its contents remain hotter or cooler than the flask's surroundings. Invented by Sir James Dewar in 1892, the vacuum flask consists of two flasks, placed one within the other and joined at the neck. The gap between the two flasks is partially evacuated of air, creating a near-vacuum which significantly reduces heat transfer by conduction or convection. 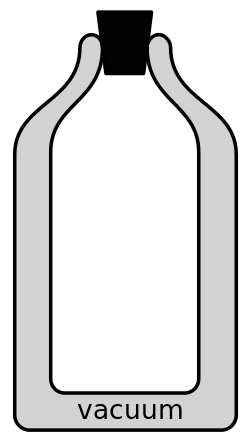 Vacuum flasks are great thermal insulators, capable of keeping your hot beverage hot for many hours but their structure makes them inherently fragile (which is why replacement vacuum flasks are for sale).

The near-vacuum that exists between the flask's walls makes the flask somewhat prone to implosion.

Stirring with an SS spoon is not recommended (although often will not actually cause a problem) because it can scratch the inside of the flask, making it even more vulnerable to implosion. Stir with a soft plastic or silicone rubber spoon.

share|cite|improve this answer
answered Jan 22 at 21:59

8
Why did my frozen water bottle explode when I opened it after it defrosted a bit?
2
Whenever we fill a bottle with cold water and close it, why is it that after a few seconds we notice cold water droplets outside the bottle?
1
Why did my bag of chips expanded in airplane and didn't get back to normal after landing?
1
Why did this ice explode?
8
Why did our universe become transparent to light approx. 300,000 years after the Big Bang started?
5
Why do steam and hot water spray from my thermos flask?
3
Why does a steel rod keep increasing its temperature after removing the source of heat?
4
Why is stainless steel used to keep fluid hot/cold?