With north and south poles fixed, do all geodesics have constant $\theta$ and $\phi$?

I was going thorough reading Kolb and Turner's The Early Universe where in Section 2.2 it starts by asking the following question.

First they remind us that light satisfies the geodesic equation $ds^2=0$ where $ds^2$ is the FLRW metric. Since the motion is on a 3-dimensional (curved) space, it cannot be compared with the motion on the surface of a sphere. This poses the first challenge in visualizing the geodesics. But let us forget that complication for a moment and assume that light is constrained to move on the surface of a sphere along any geodesic.

Next, without any loss of generality, the assume $r_0=0$ due to the homogeneity of space. Fine. Then they go on to say that the geodesics passing through $r_0=0$ are lines of constant $\theta$ and $\phi$ and therefore set $d\theta=d\phi=0$. As an example, it talks about the great circles emanating from the poles of a two-sphere. This is where I lost track.

Once the north and the south poles are fixed, one can imagine and draw the shortest arc-like path connecting two arbitrary points on the sphere that is neither along a latitude nor along any longitude. Such paths are also geodesics with varying $\theta$ and $\phi$.

How does their claim $d\theta=d\phi=0$ work for a geodesic hold in general?

The problem is three dimensional, not on a 2D sphere. The crucial point here is that space is homogeneous. Any point in space can be taken as the origin. So suppose you have an observer. You are perfectly allowed to decide that the position of this observer is the origin of your system of coordinated. So he is sitting at the point $r_0=0$ and there, $\phi$ and $\theta$ are not defined. Now what is a geodesic passing through this point ? Well, they are all the "straight lines" where $r$ varies from $0$ to positive infinity, with a fixed value of $\theta$ and $\phi$. This is how a photon emitted from the observer will propagate. Why would it not ? Space is homogeneous. Of course this is just a half-line, the full line will consist of the two half lines $(\theta, \phi)$ and $(-\theta, \phi+\pi)$. These are not all the geodesics, just those geodesics that pass through this observer.

The fact that space is curved, in this case, does not alter the "straight line propagation", because everything is homogeneous. "Curved space" means that if you measure the length of a circle, you will not find its diameter times $\pi$. In the coordinates of a different observer, the "straight lines" of constant $\theta$ and $\phi$ of the first observer do not look "straight". But geodesics passing through himself will be "his straight lines", constant $(\theta, \phi)$ in his coordinate system.

Let me be more precise. Suppose you consider the geodesic 𝜃=𝜋/2 (or 𝜃=−𝜋/2). For these values of 𝜃, 𝜙 is not defined. Now this is the trajectory of a photon going straight up (or down). Now in the real Universe there will be a star here, a galaxy there, the photon will deviate. But in the approximation of an homogeneous Universe, all directions are equivalent. To deviate from 𝜃=𝜋/2 (or −𝜋/2) the photon would have to choose some value for 𝜙. But which one? They are all equivalent ! Since it cannot choose a 𝜙 it must stay on 𝜃=𝜋/2.

And since you can always choose your system of coordinates so that the direction you consider is (𝜃=𝜋/2, 𝜙 undefined), then the geodesics starting in this direction can never "choose" a 𝜙 to deviate in that direction rather than any other. Remember all this argument depends on the assumption that the universe is homogeneous and isotropic, that is all directions are identical. If the universe is homogeneous but not isotropic one could not choose arbitrarily any direction to be 𝜃=𝜋/2. So in fact it only holds for homogeneous and isotropic Universes.

However, when one speaks of homogeneous Universes ,it is usually understood that they are isotropic too. Homogneous Universes which are not isotropic can be described mathematically, but they are weird. In such Universes, indeed, geodesics going through an observer might well not be with fixed $\theta$ and $\phi$. But clearly the intent of Kolb and Turner were an homogeneous and isotropic Universe even if they did not point it out.

Well, the FLRW metric is definitely both homogeneous and isotropic so my argument does indeed hold.

I ll try to answer

I ll try to explain it over the 2-sphere where we have only $(r, \theta)$. So the metric is writtes as,

Now let us change our reference frame and put it on $(r_1, \theta_1)$. I am not sure how to show this mathematically but imagine that your north pole is now $P_1$.

When we choose our noth pole as $P_1$, you can imagine that the arc length that goes from $P_1$ to $P_2$ has no $d\theta$ component ($\theta$ does not change). But theres again still $r$ component. 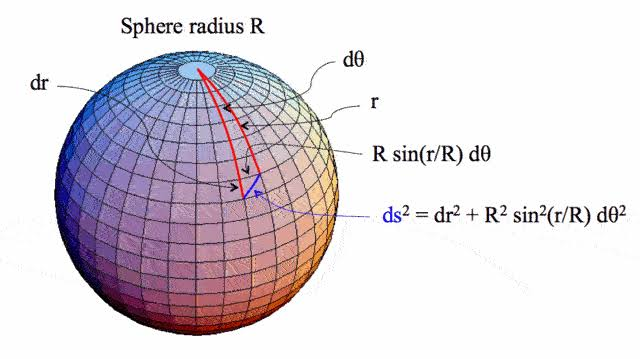 When we desribe the 2 sphere by using the spherical coordinates, and if we want to draw a line on the surface of the sphere, we would need $\phi$ or $\theta$

So the answer lies on the which coordinate system/metric you choose. And how you define r,$\theta$ etc.

In the book it seems that the author is talking about the Spherical coordinates in 3D and in this case $d\theta = d\phi = 0$ means that light is just moving radially outward.

Not the answer you're looking for? Browse other questions tagged cosmology geometry geodesics visualization or ask your own question.

6
Geodesic deviation equation - why does the ordinary second derivative give the correct answer?
5
Ray tracing in General Relativity
2
When does light reach a shell observer in Schwarzschild metric?
2
On the geodesics of the metric $ds^2=-\rho^2d\alpha^2+d\rho^2$ and the constant $l=\rho^2\frac{d\alpha}{d\tau}$
2
Are the horizon generators radial null geodesics also?
0
Fundamental Principle of Dynamics and equations of geodesics with proper time
0
Connection between affine parameter and time in general relativity
0
Calculating the distance on a cone or a sphere and the implications for understanding the geometry of space