Why does this simple equation predict the Venus surface temperature so accurately?

Assume the atmosphere of Venus behaves much the same as Earth. However, it is closer to the sun, has a thicker atmosphere, and is less massive.

Then we calculate the temperature in the Venus atmosphere where it is most similar to Earth (50 km up where the pressure is ~1 atm), and then assume it increases according to a constant lapse rate down to the surface:

So that is also very close.

@Gert asked for a more explicit derivation. So here you go.

Assume insolation follows the inverse square of distance from the sun. Therefore:

We also know, from the Stefan-Boltzmann law, that insolation is proportional to the 4th power of temperature:

In other words, temperature is proportional to the 4th root of insolation:

Then multiply both sides by $T_e$:

Thus we have the first term of the equation.

For the second term we assume that the temperature of an atmosphere increases as it gets closer to the surface, ie according to a lapse rate that is proportional to the mass of the planet:

The ratio is then:

Then multiply both sides by $\Gamma_e$ and simplify the LHS (as done above) to get:

Then assume the Venus atmosphere is like the Earth atmosphere where it is at a similar pressure (ie, at ~ 1 atm), which is at height $h_p$. Then the temperature difference between there and the surface can be found using the lapse rate:

Then the temperature at the surface $T_{v_s}$ will be:

Obviously the first term can be simplified more but I left it like that to make it more obvious what I was doing.

From discussions with @Alchimista in the chat, we identified a further assumption:

This is basically a point by point response to @AtmosphericPrisonEscape's answer which has been upvoted for some reason. Every single point in this answer is wrong.

The first term in your equation is called the radiative temperature Trad. It's the temperature that an airless body with an albedo of 0 would have. Note that airless also implies no (anti) greenhouse effects.

The first term is

This is definitely not the temperature an airless body with zero albedo would have. How could that even be possible since it is using $T_e = 288\, K$ at 1 atm pressure?

Temperatures are never additive. Energy fluxes are (the insolation is one). So, for example, if you would want to find the radiative temperature of a planet orbiting two stars instead of one, you'll add the fluxes F1=π(rp/d1)2⋅A1T41 and F2=π(rp/d2)2⋅A2T42, where Ai are the stellar surface areas, di are the distances from star to planet and rp is the planetary radius. The resulting radiative temperature would be given by the condition that the outgoing flux must balance the incoming fluxes Ftot=4πr2pT4rad=F1+F2. So here we see, that any derivation of temperature coming from a physical model must feature a quartic addition of temperatures.

Once again, all this cancels out when you take the ratio of earth to the other planet. This assumes: The temperature of the planet is proportional to the insolation by the same amount as on Earth. All of the stuff you are worried about cancels out (assuming the planet/moon is similar enough).

So with a heuristic model you can circumvent this, but then you're putting in prior knowledge about the atmospheric structure. Particularly, if you'd ask me to derive the surface temperatures in a similar manner, I'd take the atmospheric level where T=Trad and extrapolate downwards to the surface with the planets own lapse rate, not Earths. But then we put in prior knowledge of the lapse rate, and we put in knowledge that the temperature structure in fact follows this lapse rate, which it doesn't have to. A successful physical theory of atmospheres, must be able to derive both those facts, not assume them.

Finally something correct. I am putting in prior knowledge of how atmospheres work via using the info about the earth. Then you go on to say you would do something different... but you agree it doesn't make sense.

Now let's dive more into the wrong steps: Γ∝M? What the hell? Ignoring the mean molecular weight and thermodynamic properties of a CO2 vs. a N2 atmosphere is negligent, or conveniently misleading. Also it's the wrong scaling of the surface gravity with mass for terrestrial planets, which is g=GM/r2p∝M1/3, when taking into account how rp scales with mass.

On earth we know the dry (without H20) lapse rate is be 9.8 K/km. Note that Venus and Titan are both "dry" atmospheres.

Then plot that against the mass: 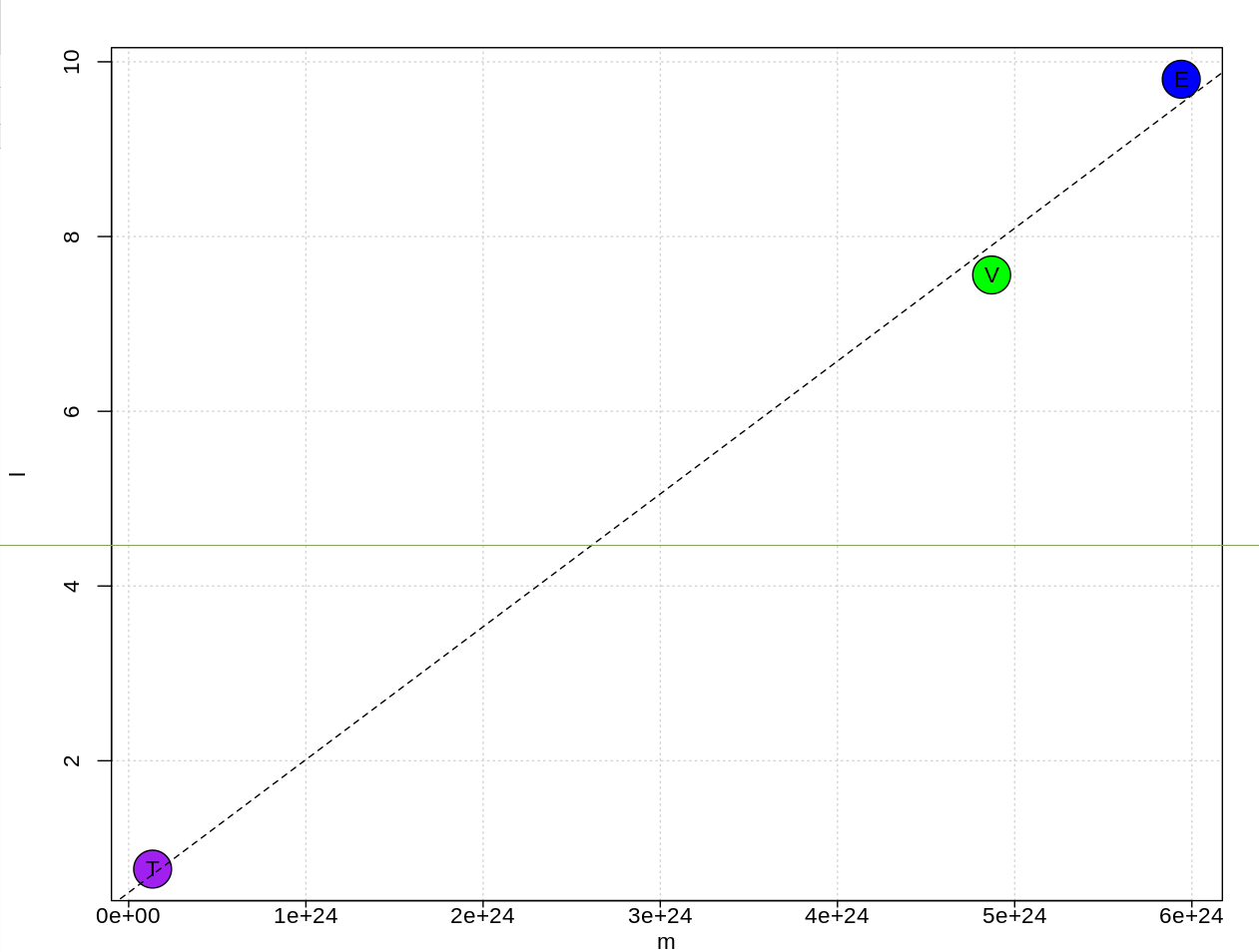 Therefore we see the average tropospheric dry lapse rate scales with the mass. So my equation reflects reality, yours does not.

Why would you take the Earth's lapse rate for different planets? That's literally out of this world. I get that the climate change denial website wants to do that, to tweak their numbers, but this assumption just doesn't make any sense to me and is wrong. Venus's lapse rate is around 10.5K/km, similar to Earth's, but that's coincidence. Titan's is around 1K/km (source).

It makes sense because I am assuming the atmosphere behaves like earth's and the lapse rate scales with the mass of the planet. Your values for the lapse rate are also wrong (perhaps they are for a certain pressure or something).

The choice of the 1 bar level: Where does that come from? Seems again like an arbitrary choice just to tweak the numbers, that won't immediately ring any alarm bells with laymen of atmospheric science.

This is the average pressure on the surface of earth where the temperature is 288 K. It is not arbitrary at all.

This was discussed in the chat. There is no tweaking, and the pressure is ~ 1 atm at 10 km altitude on Titan.

Also remember your classes in mathematical logic: From a wrong assumption, one can derive any statement, both true or false. There is no downplaying on how dangerous it is to believe in something that is wrong.

People use wrong assumptions all the time to come up with useful models. This is just a ridiculous claim. I asked a previous question about GCMs (that lead to this one) and saw they assumed the solar constant was really constant at 1366 W/m^2, ie it never varied. That is a wrong assumption, but still ok.

Given a model with N parameters, how many datapoints can I fit perfectly

This model has ZERO free parameters, all inputs are determined by observation. There is no freedom for tweaking beyond the measurement uncertainty of the input values.

We know that at the surface of the Earth the temperature is $T_{\oplus}$ and its distance from the sun is $d_{\oplus}$. Given another planet, let us say Planet X, we want to calculate $T_{\text{X}}$.

We don't know how to calculate the exact temperature but we can assume the planets are similar, and we do know that the only heat transfer mechanism can be radiation. Radiation is governed by the Stefan-Boltzmann law:

And the insolation (the heat received from the sun per unit area) has to increase when we get closer. The trend follows the inverse-square law because the solid angle subtended by Planet X (when seen from the Sun) is inversely proportional to the square of the distance (just like the gravitational and electrostatic forces).

One issue is the temperature $T$ in equation (\ref{a}), because planets don't have constant temperatures. They usually have, like Earth, scorching hot cores, ice cold layers of atmosphere and everything in between. The $T$ can be assumed to be an effective temperature $T_{\text{eff}}$ of the planet (for example, the temperature of the layer above which 99% of the radiation goes out).

Now we can use the Stefan-Boltzman law to explain the first term. For Earth we have:

And for Planet X we have:

And we can get the temperature by substituing the $j$'s:

The second term of the equation comes from "correcting" the effective/reference temperature to the temperature at the surface. In this case, the reference on earth is being taken at sea level, where $(T, P) = (T_{\oplus}, 1 \text{ atm})$. Here is where the lapse rate condition is important:

The lapse rate gives the change of atmospheric (thermodynamic) variables with alitude. The condition stated in your question follows from Boltzmann's barometric formula:

And the lapse rate for the pressure would be:

If the mass of the atmospheric molecules ($m$ in Boltzmann's equation) is similar in both planets then the lapse rates will only differ by a factor of the mass:

We can then calculate the lapse rate which will give us how much the temperature varies with altitude in Planet X:

We multiply this by the altitude to get the total change of temperature between the reference point and the surface:

Finally, we get equations (\ref{b}) and (\ref{c}) together to arrive at your original equation.

The fact that the results are close to the real values means that the assumptions are pretty reasonable.

I'm with Alchimista on this one, this is more a coincidence than anything else, and also really wrong. Also I have to disagree with, @SV's answer the assumptions are all kinds of wrong. But let me elaborate on your steps, so that we see what is going on here:

So nothing in this formula makes sense. It's just bad science. If you take too much prior knowledge about a system you want to explain and then add some tweaked numbers, sure you'll get something that fits any narrative.

1
Which results in greater net entropy production: Building a house or skyscraper?

2
Pressure at a given altitude?
10
Why is the surface of Venus so hot?
0
The Faint young Sun paradox: an alternative solution?
9
Calculating Atmospheric Pressure on an Imaginary Planet
4
Is the atmospheric pressure the cause of a planet's surface temperature or is it the temperature the cause of a planet's atmospheric pressure?
2
Earth-like Atmosphere Breaks Second Law of Thermodynamics due to Conduction?
2
How can you calculate the atmospheric layers on another planet?
6
Shouldn't $CO_2$ forcing depend on the surface temperature?
0
Winds on gas giant planets: Would they increase if closer to their star?
1
Is vapor pressure conserved during an adiabatic ascent of an air parcel?