Electric potential due to two spheres

The setup is as below: 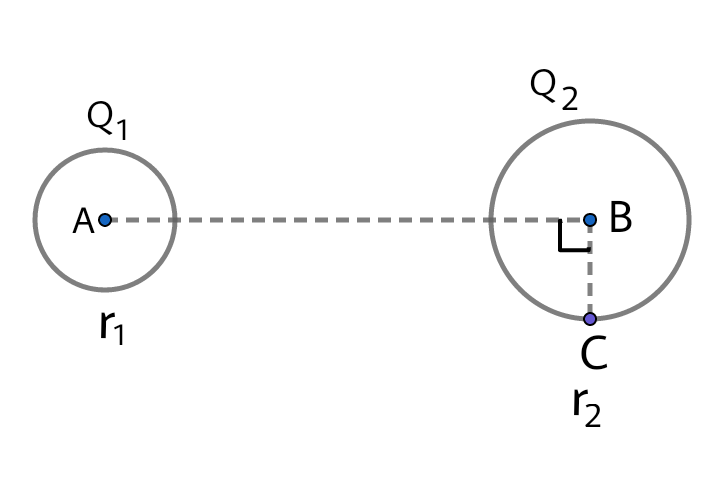 The two conducting spheres, of radii $r_1$ and $r_2$ have charges $Q_1$ and $Q_2$. The distance between their centers is AB. BC is perpendicular to AB. The problem asks to determine the potential at the mid-point of the line BC, point P (not shown).

However, the solution argues that since there is no net field inside the second sphere, the potential at P is the same as the potential at point B, the center of the sphere. And then proceeds to use $V_1=k\frac{Q_1}{AB}$.

Yes, it should. However, in this type of problems is is usually assumed that the spheres are very far away from each other or, in other words, that $AB \gg r_2$. In this way the two spheres don't influence each other so that you don't have to take into account the induction that one sphere exerts on the other. Within this approximation (which is usually explicitly mentioned in the text of the problem), $AB \approx AB - r_2$.

Not the answer you're looking for? Browse other questions tagged homework-and-exercises electrostatics potential or ask your own question.

3
Homework question about electric field between two spheres
3
Calculating the potential of 2 spherical perfect conductors with the image method
0
Electrostatic potential due to two charge system
1
Electric Potential for Concentric Spherical Shells
0
Electric potential between 2 charged spheres -- problems with sign?
2
Minimizing electric potential means potential difference is zero
1
Potential difference between two hollow spheres and amount of current flow
3
How can the surface of the system consisting of two spheres and wire be equipotential, if the potential function is defined NOT for the net force?