Many Worlds: under which conditions does the branching happen?

I am approaching Many Worlds interpretation and I have a big question that I would like to ask you:

I buy the critic moved by Many Worlds supperters to Copenhagen interpretation, saying that Bohm theory is not providing any detail about "under which conditions" the wave function is supposed to collapse. I buy this. But, switching to Many World theory, I also cannot find the answer to a similar question: under which conditions the branching happens? Because if we consider branching at very low level, we can easily say that if we consider an electron whose spin can be left or right, we have two worlds' branches. But, man, it means that for like 0.01 second of my life, 100.000.000 branches of my world are created, one for each permutation of left/right of all electrons that I am made of. Just for 0.01 second of me. And we are juts considering myself as a system, while my world is me, people sitting next to me (with their atoms), the chair (with its atoms, branching for spin left and right), etc etc. So, it seems...simply too much for being considered interesting and valuable. Or maybe branching is happening only under certain conditions? Like only a conscious observer is observing? But if this is the answer, why do we need a conscious observer? Doesn't seem too much human? That's where I'm getting lost. I would really love your point of view on this.

I agree with the other answers. The Many Worlds Interpretation has been sensationalised unnecessarily to the degree that some people imagine it to mean the existence of trillions of imaginary universes each as real as ours, and each created every time a wave function collapses. Everett's PhD is available online- there are no such bizarre suggestions in it. He merely makes what seems to me to be an obvious assertion that any measuring apparatus is itself quantum system; he goes on to say that there can be a combined wave function for the measured particle and measuring system, and that could be a superposition of states, each corresponding to the allowed measurable values of the observed property of the particle. There is nothing sensational in that. Superpositions are a common ingredient in conventional QM and other branches of physics. If I twang a guitar string it vibrates in a superposition of normal models- that doesn't mean there are multiple copies of the string in different universes. Likewise in QM- any wave function can be said to be a superposition of any compatible basis set- it is a mathematical decomposition.

I would probably suggest (at the high risk of being shot down, lol) that there is no quantifiable answer to your excellent question, because your first premise re critique of Copenhagen is correct, i.e. the wave function cannot actually collapse.

Many people have gone into detail of course, but for me, the clearest and easiest to understand is Adami, who not only has a paper going into all the detail you could ever want, but who has also proposed an experiment to prove it.

Quote: 'It is silly to call [H. Everett's] relative-state picture a "many-worlds" interpretation, because it does not propose at all that at every quantum measurement event the universe splits into so many worlds as there are orthogonal states'.

Remember, interpretations of quantum mechanics do not fall within the domain of science because to date no experimental procedure has been identified that can make a selection among the many interpretations that have been invented

It is different mathematics describing the same physical measurements and observations . The many worlds interpretation gets its inspiration from the Feynman path integral mathematics :

The path integral formulation of quantum mechanics is a description of quantum theory that generalizes the action principle of classical mechanics. It replaces the classical notion of a single, unique classical trajectory for a system with a sum, or functional integral, over an infinity of quantum-mechanically possible trajectories to compute a quantum amplitude. 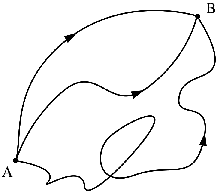 These are just three of the paths that contribute to the quantum amplitude for a particle moving from point A at some time t0 to point B at some other time t1.

This is a tiny example of the infinity of different paths that this way of calculation needs to sum up to come with predictions for measurements and observations.

It is a small step to say that the paths are real worlds.

In Feynman’s path integral approach every possible path through space contributes to the final “path”, the integral over all paths. Hence, the quantum particle is traveling along all possible paths from one place to another and thus sums over all histories. If we call each history a real “world” then the sum over histories (so-called worlds) can be a predecessor of Everett's many-worlds interpretation.

In a sense it is the Platonic view of nature, mathematics is the reality. The branches are already there in the path integral formulation. If you posit them as real, you have the many worlds interpretation.

Not the answer you're looking for? Browse other questions tagged quantum-mechanics quantum-spin quantum-interpretations or ask your own question.

3
Is there a manifestly Lorentz invariant formulation of the many worlds interpretation?
4
Does quantum randomness predicate an infinite number of realities?
6
Is the many-worlds interpretation (MWI) of QM inconsistent with quantum field theory
4
What's the difference between the Copenhagen and many-worlds interpretations?
0
Are longer lives more likely in Everettian multiverse?
1
Is the Second Law a consequence of the Many Worlds principle?
5
How do “many worlds” theorists explain particle double-slit interference patterns?
0
Can the Many Worlds Interpretation of Quantum mechanics, in principle, cater for all physical process from smallest to largest “systems”