So I did an experiment on conservation of momentum, where two carts with different mass start at rest and get accelerated and we measure the speed. What I observed was that after the acceleration, they started to decrease in velocity. I thought this was due to presence of frictional force, and I used regression line to get the "a" of friction. And here's what I got, and from here, I cannot seem to go further because the graph seems like it's contradictory. Shouldn't the slope of both of them be the same as a = ug? (where u is the coefficient of kinetic friction) 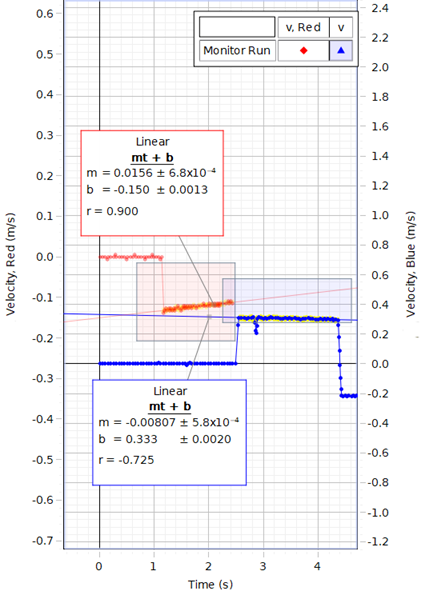 First, assuming these “carts” have wheels we are dealing with rolling resistance (aka rolling friction) not kinetic friction (aka sliding friction). So the force opposing motion is

Where $C_{cc}$ is the coefficient of rolling resistance and $N$ is the normal force =$mg$.

I bring this up because I notice the magnitude of the coefficient $m$ (not to be confused with m for mass) for your red cart equation is greater than the blue and the red cart weighs twice the blue. Perhaps the coefficient of rolling resistance is higher for the red cart?

Just a thought. Hope it helps.

Not the answer you're looking for? Browse other questions tagged homework-and-exercises newtonian-mechanics friction projectile or ask your own question.

0
Analysis of the impulse of 2 colliding carts under the effect of magnetic repulsion
5
Relationship between height and velocity in conservation of mechnical energy
2
Falling chain with friction
1
What causes angular and linear deceleration in a sliding and rotating ring?
2
Experiment on friction coefficient
1
Why do spheres roll so far?
4
Predicting Rotation vs Sliding Forwards when Pushing an Object