Why is sound attenuation greater in dry air than humid air?

I have just learned the surprising fact that the attenuation coefficient of sound in air depends strongly on relative humidity: at any given frequency, it can be several times larger in very dry air (10-20% RH) than in very humid air. The internet suggests the reason for this is that sound travels faster in (less dense) humid air, but this does not make sense. The speed can change <1% while the attenuation coefficient changes 400%. Does anyone have a more complete explanation?

You are absolutely right that humidity plays a large role in acoustic attenuation, like the plot below shows. While you did ask for a more complete explanation, I should warn you that the physics behind this are non-trivial. I'll try to make it as easy as I can, though. 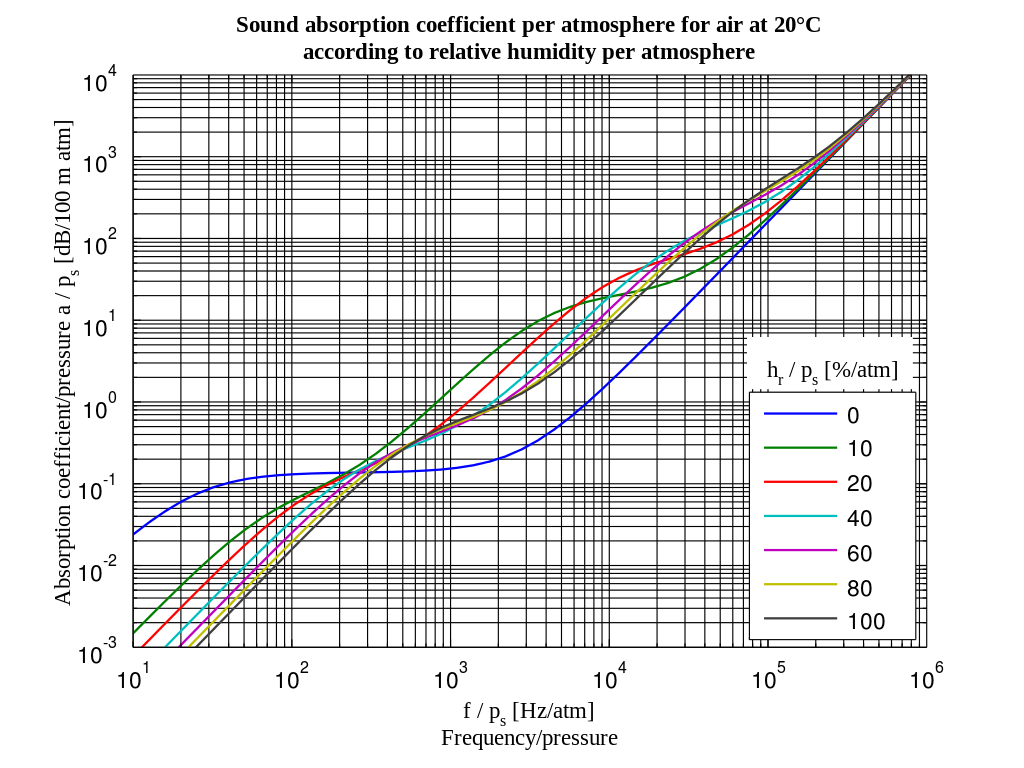 There are three mechanisms of attenuation in air. They are viscosity, thermal conduction, and molecular relaxation. At audible frequencies, molecular relaxation totally dominates. Unfortunately, this is also the mechanism that is the most tricky to explain. But by explaining it, I can also explain why humidity affects acoustic attenuation so much.

Molecules with two or more atoms can have several types of energy. The simplest type is their translational energy $\frac{1}{2} m v^2$, which is given by their mass $m$ and velocity $\mathbf{v}$. They can also have what we call inner energies, namely rotational and vibrational energy.

Consider a gas consisting of such molecules. If the gas is at rest, the molecules' translational and inner energies are, on average, at equilibrium. Now, if we suddenly compress the gas, we push the energies out of equilibrium. While the compression has suddenly increased the translational energy, the inner energies are as of yet unchanged (given that the compression was pretty much instantaneous).

Each type of inner energy has its own characteristic time that this equilibration, or relaxation, takes. For this mechanism of attenuation in air, we only really need to consider the vibration in nitrogen and oxygen molecules. Thus, we are looking at two characteristic speeds, $\tau_N \sim 10^{-3}\,\text{s}$ for nitrogen and $\tau_O \sim 10^{-5}\,\text{s}$ for oxygen.

Relaxation in a sound wave

What if a pure nitrogen gas is compressed and rarified by a passing sound wave of frequency $f$? Put briefly, the pressure is proportional to the translational energy, so the compression and rarefaction therefore changes the translational energy. But what happens to the inner degrees of freedom? Well, we can look at two edge cases:

The effect of humidity

While I tried to cover this as briefly as possible, it's still a pretty long explanation. However, in the unlikely event that you would want to know even more about this, I cited plenty of references when I covered this topic in section 2.2.3 of my PhD thesis. The most thorough and complete reference, from my memory, was a book chapter by H. O. Kneser (also previewable on Google Books).

Not the answer you're looking for? Browse other questions tagged acoustics humidity attenuation or ask your own question.

6
At what altitude would the air be too thin to carry a sound wave?
2
Are absorption and attenuation the same thing?

16
How does humidity affect the path of a bullet?
61
Why does our voice sound different on inhaling helium?
4
Why can I see my breath after I pop my ears?
0
Why air conditioner, dehumidifier, and heater all can lower the relative humidity?
0
Why we cannot hear ourselves or speak in water
3
Can Humid air ever be heavier than dry air?
1
Which is the same between two connected rooms, relative or absolute humidity?
22
Light propagating through a sound wave
1
Is the sound of hammering nails louder since it travels through the walls?