The potential at a point

Work isn’t $Fd$ when the force changes with position. It’s an integral, and the integral is finite even over an infinite distance because the force goes to zero sufficiently rapidly at large distances.

The integral is a standard homework problem so I am not going to write it or evaluate it.

Loosely speaking, at great distance the force required gets infinitely tiny, so the two infinities largely cancel out.

The force between two point charges is an example of an inverse square law where the force is proportional to the reciprocal of the separation squared, $F\propto \frac {1}{r^2}$, as illustrated below. 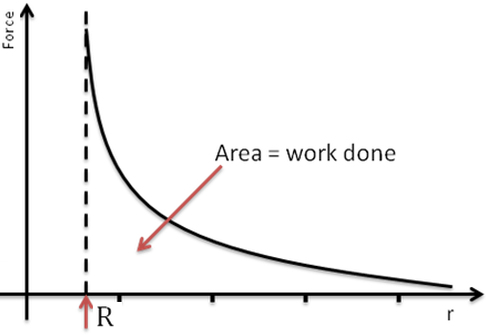 As the separation increases so does the force decrease.

The area under a force against separation graph is the work done and as long as the area under the graph from $r=R$ to $r\, (=) \, \infty$ is finite, which it is, there is no problem.

Force is dependent of distance $r$, so thing move like this

Not the answer you're looking for? Browse other questions tagged electrostatics energy charge potential work or ask your own question.

0
Energy of the system of similar charges