How can the annihilation of an electron and a positron create a quark-antiquark pair or a muon-anti muon pair?

The overview of this interaction is that a positron and an electron annihilate with each other and create two gamma photons which contains too much energy and soon materialise into a quark-anti quark pair or a muon-anti muon pair. But the total rest energy of the electron and positron(1.102 Mev) is less than the the total energy required to produce either the quark-antiquark pair or the muon-anti muon pair(211.4 Mev)

How can the annihilation of an electron and a positron create a quark-antiquark pair or a muon-anti muon pair?

But the total rest energy of the electron and positron(1.102 Mev) is less than the the total energy required to produce either the quark-antiquark pair or the muon-anti muon pair(211.4 Mev)

Certainly if the annihilation happens at rest, i.e. the kinetic energy of the electron and positron is zero, there is only enough energy to generate photons of specific energy, which are seen as a line in the cosmic gamma spectrum.

BUT , electrons and positrons are elementary particles that follow special relativity dynamics and once they have kinetic energy are described by a four vector. The addition of two four vectors can supply enough energy in their center of mass to be able to generate very many other elementary particle pairs, as annihilation adds all quantum numbers to zero, and the new particles will have to appear in pairs of particle antiparticle to conserve the new quantum numbers appearing.

This can be seen in the experiments at LEP, where the energy of the beams was in hundreds of GeV , and there is a plethora of channels observed.

The theoretical model to understand the data is called standard model of particle physics, validated by the LEP data. This uses quantum field theory, and there are no two gammas involved in the generation of the many pairs. It uses Feynman diagrams, the first order (in the perturbation expansion) of which is with the exchange of a virtual gamma or Z, for the production of muon pairs, for example. 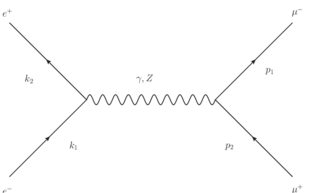 Other pairs that add up to zero quantum numbers , or multiples if the energy is enough, will be created.

Just quark-antiquark creation alone as end particles cannot happen, because quarks cannot be free so there have to be enough energy to generate the extra quarks antiquarks needed for pairing up to keep conservation of color and other laws . See this link for event examples.

You are talking about electron positron annihilation and pair creation. Now I understand that you are confused because of this sentence on wiki:

There are only a very limited set of possibilities for the final state. The most probable is the creation of two or more gamma ray photons. Conservation of energy and linear momentum forbid the creation of only one photon. (An exception to this rule can occur for tightly bound atomic electrons.[1]) In the most common case, two photons are created, each with energy equal to the rest energy of the electron or positron (0.511 MeV).[2]

Why can't a single photon produce an electron-positron pair?

Each of the original photons would need to annihilate with a new photon (or near an atomic nucleus) to create a muon antimuon pair.

Not the answer you're looking for? Browse other questions tagged quantum-mechanics electrons or ask your own question.

24
Why can't a single photon produce an electron-positron pair?