I'm taking an introductory course on meteorology and in the lecture notes there is an explanation of the Coriolis effect that confuses me. The components of a wind field are u, v and w: $\vec{U} = u \cdot \vec{i}+v \cdot \vec{j}+w \cdot \vec{k}$. The unit vectors are shown in this figure (the coordinate system is rotating with the earth and $\vec{k}$ is the vector perpendicular to $\vec{i}$ and $\vec{j}$): 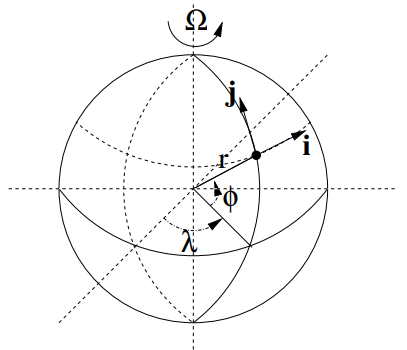 This first equation I understand just fine. For example, when moving away from the equator, your distance to earth's rotation axis decreases, so conservation of momentum requires your u-component of velocity to increase. This is represented by the first term in the RHS of the first equation. The second term tells us that by going straight up, our distance to earth's rotation axis increases and so our u-component of velocity must decrease. However, I fail to see how having a non-zero u-component of velocity causes your w or v-components of velocity to change (equations 2 and 3). Whether you're moving along the equator or running in a perfect circle around the north pole, to me it seems that angular momentum is conserved. Can anybody shed some light on this?

In terms of the conservation of angular momentum, it is of course conserved in the inertial frame but it is important to remember that the coriolis effect happens because of the chosen non-inertial reference frame. The images on the wiki page do a good job of illustrating this: https://en.m.wikipedia.org/wiki/Coriolis_force

Conservation of momentum causes the other components.

I have found the answer. Someone in the comments pointed me in the right direction by mentioning the eotvos effect. A non-zero u component causes the centrifugal force to increase. That's why the forces represented by equations 2 and 3 always sum up to a force that is perpendicular to the rotation axis of the earth.