Why do these two ways of understanding constant acceleration give different results?

I have a question pertaining to the concept of acceleration and it's formula - Both seem to give me different answers.

My concept of acceleration explains me this : 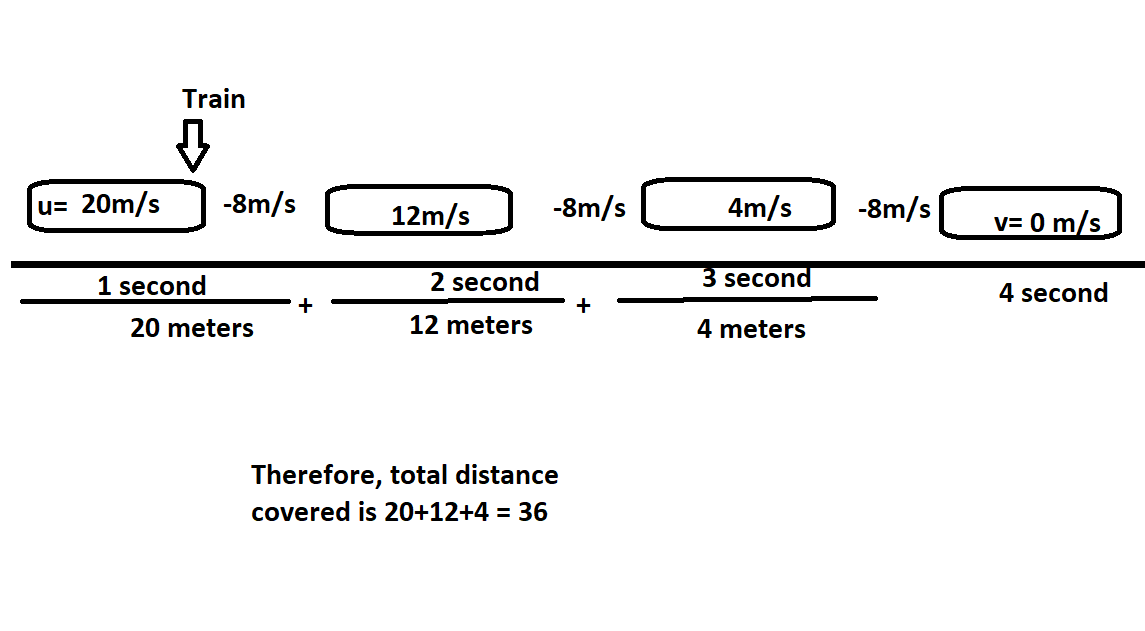 According to my intuition of acceleration and velocity, when an object is said to be accelerating at $-8\ \mathrm{m/s^2}$, it means that with every passing second, it's velocity will reduce $8\ \mathrm{m/s}$. So,

Where am I going wrong in my conceptual understanding, I really don't understand!

Your mistake is in assuming that within those one second intervals the velocity is constant. The velocity as a function of time $v(t)$ for motion under constant acceleration $a$ is given by $$v(t)=at+v_0$$ where $v_0$ is the velocity at $t=0$.

You are actually on the right track though. If you wanted to take your approach to the correct extreme, we would break our time, not into $1\,\mathrm s$ intervals, but instead into really small time intervals $\text dt$ such that the velocity can be considered constant. Then we can add up all of the changes in position $\text d x=v\,\text dt$. This is where calculus becomes useful, and we get an equation you are probably familiar with $$\Delta x=\int_{x_0}^x\text dx=\int_0^tv(\tau)\,\text d\tau=\frac12at^2+v_0t$$

Combining this with our expression for $v(t)$ to eliminate $t$ gives us the expression you give your first correct method.

I think that a good way to highlight the error in your "concept of acceleration" answer is to draw a velocity against time graph and to remember that the area under such a graph is the displacement. 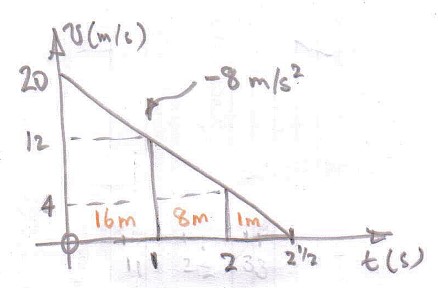 You will see that in the first second the velocity is changing and to get the displacement you need to use the average velocity during that time interval which is the constant acceleration kinematic equation $s = \left (\dfrac{v+u}{2}\right)\,t$.

The result is that as one increases the number of constant velocity intervals the computed distance travelled (area under the graph) gets closer to $25 \,\rm m$.

Aaron Stevens is right, but maybe I can clarify his explanation.

Consider the first second. At its beginning, the velocity is indeed 20 m/s, and at its end it is 12m/s, as you correctly wrote. But what distance was covered during this first second ?

Since the acceleration was constant the mean velocity was the average, (20+12)/2 m/s, namely 16m/s. So the distance covered during the first second was 16 meters.

Now consider the third second. At the beginning, the velocity is 4m/s. It will take only 1/2 second for the velocity to reach 0, at which point the train stops for good. It does not keep accelerating, nor accelerating in the other direction. That would be a different problem, leading to a different solution. In this case it is clearly said that when the train stops, the problem ends. SO there is not a full third second, the process stops at the end after a total of 2 and 1/2 second.

Consider this last 1/2 second. At the beginning the velocity is 4 m/s, and at the end it is zero. So the average is 2 m/s. Since the duration of the motion is just 1/2 second, the distance covered during this last part of the motions is just 1 meter. So 16 meters for the first second, 8 meters for the next one and 1 meter for the last part add up to the correct result of 25 meters.

There is a faster way to get the same result.

How long does the train keep moving ? At the beginning the velocity is 20 m/s ant the acceleration is -8 m/s^2, so it takes 20/8=2.5 seconds to stop (just what we obtained above, going step by step, one second plus another one plus half the third one).

What is the average velocity ? At the beginning 20 m/s and zero at the end, so 10 m/S on the average.

To make the notion of average speed clearer, at the request of the OP, I will give more details. These details were first given in comments. I moved them later in this post at the suggestion of Aaron Stevens.

Add them up, remembering that when T reaches a half second you have already covered the entire first second because you are counting the milliseconds in the first half second and those on the second half together, you get 500 times 32 thousands of a second so 16 meters. It is as if you had covered the first second with a velocity that is the average between 20 and 12 m/s. This only works because the acceleration is constant.

You could equally have started by computing how long the process would take, 20 m/s divided by absolute value -8m^/s^2 of the negative acceleration shows that the trains stops after 2.5 seconds. Than consider the very first millisecond at 20m/s and the last one at extremely slow speed, distance covered one thousandth of (20+0) meters, and coupled milliseconds at time T after the beginning, velocity 20-8T, and T before the end, velocity 8T, so 20 thousandths of 20 meters for each pair. But now T extends till the half of the full duration of the process, thus half of 2.5 seconds. Always the sum of extremal velocities, multiplied by half the duration, or equivalently, full duration times the AVERAGE of the initial and final velocity of the time interval. But once more ONLY IN THE CASE OF CONSTANT ACCELERATION otherwise it does not work. –

You misunderstand the fact that the velocity is not same inside every second. I mean, the velocity changes in a very very small amount of time, much smaller than a second.

your reasoning would imply that the velocity remains same in the duration of a second, which is not the case.

I will consider that you do not understand calculus, that's not a problem though, you cal always learn!

we can see that the acceleration acts and changes the velocity. not at every second, but at every instant! this is particularly fascinating! (imho)

for a very small teeny meeny change in time (dt) we can consider constant velocity. this velocity changes in every interval. this we need to integrate (to add all the areas under the v-t curve) to find displacemt

the time might as well be fractional, yet the acceleration is measured in m/s/s this is done to keep everything in the preferred units.

i personally love 3b1b's video. you may gain a much better intuition by watching 3blue1brown's videos about calculus. link: https://www.youtube.com/watch?v=rfG8ce4nNh0&list=PLZHQObOWTQDMsr9K-rj53DwVRMYO3t5Yr&index=8

Your answer is wrong because your assumption is wrong, why

You assume that velocity of the train is constant during that particular time interval of 1second it is very difficult to exactly velocity at fraction of seconds. . You can understand it by the diagram of straight line having the negative slope.

To get the value of displacement you should write $a=vdv/ds$. And integrate it within the limits of velocity.