I must (sheepishly) admit that I'm stumped on a beginning page of The Feynman Lectures Volume 2. I have included a picture from the page. [Let me know if I'm breaking copyright, or if I can include the surrounding text as well.]

I understand, I believe, how a bar magnet underneath a current carrying wire can deflect the wire. The right hand rule gives a force $\mathbf{F} = q\mathbf{v} \times \mathbf{B}$ that pushes the wire in the $y$-direction. Here, I assume the wire goes along the $x$ axis, the bar magnet runs along the $z$-axis. The direction in $y$ that the wire is deflected depends on which way the current is going. What I DON'T understand is his off hand comment that the wire also exerts a force on the magnet. I can see that must be the case - otherwise you could have a perpetual motion device (see his text), but I'm having great trouble applying the right hand rule to see how the wire moves the magnet.

Here's what I'm thinking. Clearly, my assumptions are in error in one or more places. I think this should be a simple concept but I'm missing something basic. I'm thinking of the magnet as a tight coil or helix of current carrying wire (is that ok?). The magnetic field coming from the overhead wire is in the $y$-direction at the top of the magnet (is that correct?). The currents in the magnet are little circles in the ($x$-$y$) plane. I assume it is these currents that I should think of as the "$\mathbf{v}$" part of $\mathbf{F}= q\mathbf{v} \times \mathbf{B}$. If I cross $\mathbf{B}$ (which is in the $y$-direction) with currents that are going in the $x$-$y$ plane, I get a resultant vector in the $z$-direction. In other words it would seem that the bar magnet is getting pushed into the table or possible upwards towards the wire. What am I missing?

I don't have a problem with the two current carrying wires next to each other repelling or attracting each other. (At least I think I understand it :)) But this has me stumped.

If you read this far, thank you! I'd like an explanation or pointer to another source that explains it. Finally, I'll break StackOverflow's cardinal rule and ask a second question: Is there a name for force from the wire on the magnet? Anything like "induced" or "reactive"? I was trying to Google the problem myself but could only find discussions of two parallel wires OR the force from the magnet on the overhead wire. I suspect though, I'm so ignorant that I don't know the correct terms to Google! 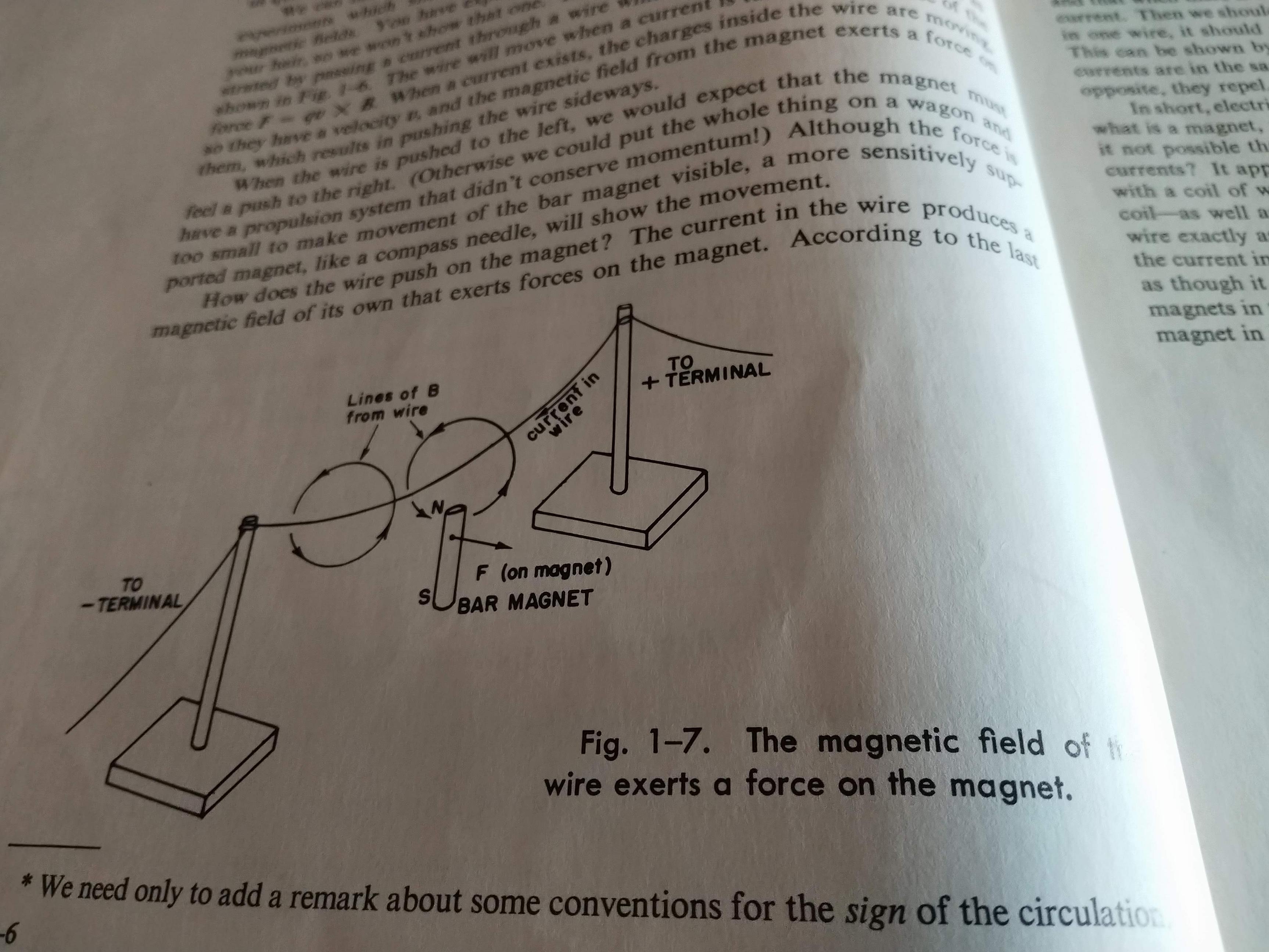 I think your analysis is all good, except for your statement that $\bf{B}$ is in the $y$-direction.

This is true only for points that are directly beneath the wire.

Most points on your coil are not directly beneath the wire, they are off to the side a bit. At such points, the magnetic field from the wire has a vertical component, which gives a net force in the $y$ direction when crossed with the current direction at those points.

(Of course, there is also a y $component$ of B at every point on the coil, but the vertical force this causes is exactly cancelled by an opposite force acting on the symmetric point.)

Dave, please DO NOT ACCEPT my answer.

Sounds like a strange request, he ? The answer you should accept is Paul G's since he posted it before mine.

I don't want to steal it, just make it maybe a bit clearer. I did it in comments, but it will be more visible here.

As Paul G wrote, because the field lines are circles and thus though the $y$ component of the $B$ field below the wire is the largest, there is a small $z$ component in the B field produced the wire at the position of the coils (which have finite radius), and the sign of this component is opposite on opposite sides of $y=0$ plane where the wire is. The current in the coils have opposite $x$ orientations on these opposite sides, so the relative sign with the $z$ component is the same so their cross products (which are in the $y$ direction !) add up to a net force in that direction.

Contrariwise, the $y$ component of B is the same on each side, and thus the (separately much larger !) cross products with the $x$ component of the current on each side of the plane exactly cancel each other by symmetry, so there is no net $z$ component to the force.

I'm thinking of the magnet as a tight coil or helix of current carrying wire (is that ok?).

The magnetic field coming from the overhead wire is in the $y$-direction at the top of the magnet (is that correct?). The currents in the magnet are little circles in the ($x$-$y$) plane.

Hmmm, let me double-check that I understand your coordinate system:

The right hand rule gives a force $\mathbf F=q\mathbf v\times\mathbf B$ that pushes the wire in the $y$-direction. Here, I assume the wire goes along the $x$-axis, the bar magnet runs along the $z$-axis. The direction in $y$ that the wire is deflected depends on which way the current is going.

Okay. I would say that your $x$-direction is "out of the page", which means that the plane is the $y$-$z$ plane. If $y$ is to the right and $z$ is up, then your coordinate system is right-handed (which means that cross products have the sign you expect). However, if $\mathbf B = B\hat{\mathbf{z}}$ and $q\mathbf v = qv \hat{\mathbf x}$, which is how I interpret your definitions and Feynman's figure, then the force on the wire will be in the $-\hat{\mathbf y}$ direction. I'm not sure whether you stated this sign explicitly or not, but you'll want to make an even number of sign errors (ideally, zero sign errors) as you try to convince yourself that these two forces are in opposite directions.

With those conventions, your geometry as quoted above is correct. The field from the wire points in the $+y$ direction at the location of the bar magnet, which we can model as many small current loops in the $x$-$y$ plane, which is normal to the page.

When I want to think about magnetic forces in a non-algebraic way, I use these rules:

So let's think about the action of your little $x$-$y$ current loops, using a mixture of these heuristic rules and the $q\mathbf v\times\mathbf B$ rule. Here's a crummy text-only drawing of the north end of the magnet. The $\mathbf B$-field due to the wire (coming out of the page, (.), somewhere far above) points to the right. In each little current loop, there's current coming out of the page (.) on the left side and returning into the page (x) on the right side.

(Here's a slightly more formal statement of these rules.)

From this perspective you can start to see that a handwaving explanation of the net force on the permanent magnet is going to involve a lot of waving. If it were a good approximation that the field from the wire were uniform, then the permanent magnet would feel a torque but not a force. However, the permanent magnet can't rotate on its own --- that would violate conservation of angular momentum. If the magnet were twisted clockwise in my crummy text-diagram, so that the little current loop dipoles were aligned with the field from the wire, that clockwise angular momentum would have to come from somewhere. And the jog to the left that the wire experiences --- which called a "force on the wire" back when we were imagining the magnet as fixed --- is just the thing to give the entire system the little bit of anticlockwise angular momentum.

However, the fact that the field is nonuniform is going to make the overall motion much more complicated. Feynman was probably smart to leave a detailed description of the back-reaction on the permanent magnet unspecified.

Not the answer you're looking for? Browse other questions tagged electromagnetism magnetic-fields electric-current maxwell-equations or ask your own question.

3
How can I use a magnet to lift a paperclip?

5
Can a current carrying loop or wire produces no magnetic field?
3
Does the skin effect and the proximity effect cancel each other out?
1
Magnetic force as a relativistic effect?
11
Could the Faraday's rotating wire experiment be explained without using Lorentz force?
1
Will a small magnet affect an insulated computer wire?
0
Magnetic force of a magnetic field around a wire
1
Reaction force from magnetic force
0
Why is the direction of current in a wire different depending on if a force induced a current or a current induced a force?
0
Confused about Feynman Lectures on attraction between two charges or wire as relativistic phenomenon
0
Does Ampère's force law apply to a single wire?