In short, my question is exactly how and why a stone attached to a string follows a circular path when its velocity is perpendicular to force? Also, why does not the stone falls into the center because there is a force pulling it towards the center?

This is not always true, sometimes it may result in a circular path given the boundary conditions and the forces involved.

In short, my question is exactly how and why a stone attached to a string follows a circular path when its velocity is perpendicular to force?

It is a fact that turning a tied stone over your head ( to keep the circle in the same gravitational field for simplicity) will result to a circular path. The circular comes because in your experiment the string gives a maximum radius for anything tied to it ( even a dog) and a circle is defined by r=constant, maximum distance.

So this part of the question reduces to why is the string at maximum distance, which is the second part

Also, why does not the stone falls into the center because there is a force pulling it towards the center?

Lets try it in turn.

Newton's first law says that a body in an inertial frame stays at rest or moves with constant velocity if no force is acting on it.

Take an infinitesimally small interval of the path of the stone, in that interval the stone has velocity (three vector) v and can be considered to be in an inertial frame, so it should fly away on the tangent ( breaking a window?), why does it not? Because a force is applied in a Δ(t) that changes its direction, pulling it in, so it is no longer in an inertial frame. This force is applied by you through the tension in the string ( and the electromagnetic forces that hold the string together). If the string is cut the stone will fly off on the tangent, the stone following its instantaneous inertial frame, since no force would be applied to it.

The force that is pulling it towards the center while tied is working against the instantaneous impulse (dp/dt) for the stone to leave on a tangent ( breaking the string). These are called the centripetal and centrifugal forces equal to each other , the centrifugal an apparent force coming out of the mathematics.

If the force you apply through the string is not enough to keep the stone circling over your head , it will not go into a circle, but a random fall, due to gravity.

One does not need a string to generate circular tracks. These bubble chamber tracks coming out of a gamma annihilation into electrons and positrons are in a magnetic field, which interacts with the motion of charged particles . 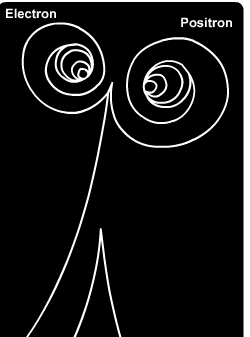 The two spiralling tracks in this bubble-chamber diagram were made by an electron and a positron. These particles were created by a high-energy gamma ray in a collision with the electron of a hydrogen atom in the bubble chamber. The long slightly curved downward track was made by the recoiling electron.

The force conducted by the string, is substituted by the $Bqv$ of the magnetic interactions giving the centripetal force, while the centrifugal $mv^2/r$ balances into a circle of radius r. The radius is diminishing in these pictures because the ionization which makes the tracks visible reduces the velocity of the track. All high energy physics data depend on this effect on charged tracks in a magnetic field.

For a fixed mass (and non-relativistic speeds), acceleration is proportional to force (Newton's Second Law). This is important to the example I would like to give that helped me to explain this.

Personally, I'm not a big fan of the "mass on a string" example, because the tension in a string is not that easy to visualise without getting confused with the string breaking etc. (just my opinion).

I prefer to convince the principle of circular motion to myself by considering a spaceship...

You are in a spaceship drifting past a planet (we are ignoring gravity here!) and as you go past you turn on a set of side thrusters pointing towards the planet.

Now: if you kept your thruster on and pointing towards the planet as you bent away from it, you would accelerate more and more until eventually you would have a gigantic velocity heading almost exactly away from the planet.

So here is the key point for me: if you keep the acceleration pointed at a constant direction relative to something outside you (here the planet), you will just accelerate in that direction and eventually be going in a near straight line. Therefore, in this simple example, an acceleration (force) that was initially perpendicular to your "forward" motion has not caused circular motion, but instead just bent your path so you tend to just accelerating along a line.

The key to circular motion is that your acceleration is not in a constant direction (not just constantly pointing towards a planet). To make your spaceship move in a circle, you must angle your thrusters so that they permanently shoot perpendicular to your motion. This means you start an arc just as you do when you point them at a planet which you are drifting past, but as you bend, you point them around so that they continue to shoot outwards. This will arc you a bit more. By keeping to this - pointing the thrusters "outwards" - your spaceshift will go in a circle! Easy right?

Now by analogy, in the case of a stone on a string, instead of the thrusters facing out of the circle and pushing you around the circle, they are on the inside - in the form of tension - pulling you inwards. This has precisely the same effect - keeping you going around in a circle.

Not the answer you're looking for? Browse other questions tagged newtonian-mechanics forces velocity or ask your own question.