What is the expected size of primordial black holes?

I often see it implied that primordial black holes tend to be small compared to stellar masses;

Since primordial black holes did not form from stellar gravitational collapse, their masses can be far below stellar mass (c. 2×10^30 kg)

Given what we know about the state of the universe at the time of primordial black hole formation, and of the mechanisms by which they formed, what is the average/expected (in a statistical sense) size of such a black hole?

The answer is pretty much anything you want. Models for their formation are flexible enough to allow pretty much any reasonable size. There are some practical limits. If they would too small, we would expect them to have evaporated by now. Obviously, they also can't have masses that are of the order of all the mass in the universe.

I've seen people seriously suggest primordial black holes as large as millions of solar masses as seeds for galaxy formation, an as light as couple of trillion kg to explain dark matter. 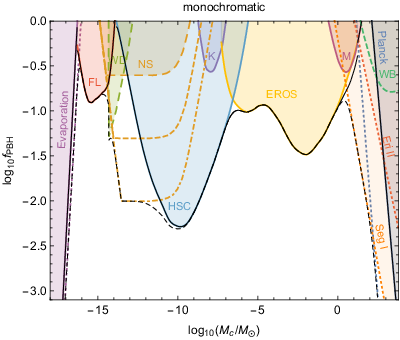 Note that the validity of some of these bounds is subject of ongoing discussion. I'm no expert, so can't vouch for the validity of the particular bounds shown here. Anyway, anything between $10^{-17}$ and $10^2$ solar masses is still viable as being a some fraction of the total dark matter.

Not the answer you're looking for? Browse other questions tagged cosmology black-holes space-expansion estimation cosmological-inflation or ask your own question.