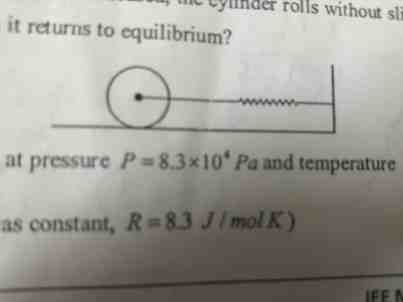 Consider the system in the above diagram. The surface has enough friction to initiate pure rolling.

It is because of friction. Friction has a torque about the center of the cylinder, so this force causes the cylinder to rotate and gain rotational kinetic energy.

But isn’t friction a non-conservative force. So why is energy conservation even valid?

So the overall change in the cylinder's total kinetic energy just comes from the spring force, but the friction force still plays a role here. No net work does not mean nothing happens :)

The other way to look at it is that the contact force with the ground provides a torque about the axle of the wheel. This seems straightforward, except that this force does no work and yet the rotational KE increases. All of the KE comes from the PE of the spring. The contact force provides no energy itself but does function as a constraint which splits the energy from the spring between rotational and linear kinetic energy.

I think the easiest way to look at this problem is to look at it as realistically as possible.

This is obviously true (that the spring is the source of the force) since the spring is the entity in the problem that has potential energy stored within it. Static Friction doesn't supply energy to move anything. Rather, static friction is more like a bond that connects things together so they don't move.

(Note, if there is friction, and the two surfaces move in relation to each other, it's sliding friction, and that's a different/more complex problem where we have to compute the amount of heat lost too.)

Therefore, the total amount of energy supplied by the spring contracting is divided into two compartments, 1) some rolling/angular kinetic energy, and 2) some linear/translational kinetic energy.

Rolling problems are made confusing by pretending (framing the problem in terms such) that friction supplies a motive force. Just look at the problem realistically. Identify the source of the force (which always comes from the conversion of one type of energy into another). Locate the lever arms and hinge points (the points around which motion rotates). The problem seems more intuitive when you model the problem to reflect reality.

That's my favourite type of question- entirely conceptual, with no maths!

The answer is that the cylinder undergoes a succession of tiny rotations about its successive contact points with the ground, which is equivalent to a lateral translation combined with a rotation about the cylinder's axis. That will come utterly clear if you follow this explanation.

Imagine replacing the cylinder with a tall rod balanced on one end. I hope you can easily imagine that if you apply a lateral force to its centre of mass it will topple over. It topples because the force creates a turning moment about its point of contact with the ground, with friction doing the job of restraining the foot of the rod. Note that the rod is now rotated- what was its vertical axis is now its horizontal one.

Next imagine replacing the pentagonal cylinder with cylinders of increasingly many faces, a hexagonal one, then an octagonal one, and so on. In each case a force applied to their central axis will cause the cylinder to topple onto its next face.

The circular cylinder is simply the extreme case. If you think of it as having a very large number of very tiny faces, its rolling is actually toppling from one tiny face to the next.

Not the answer you're looking for? Browse other questions tagged homework-and-exercises newtonian-mechanics rotational-dynamics spring or ask your own question.

11
Is work done in rolling friction?
3
How can angular velocity be constant even when there is a torque by friction?
0
Roller-spring system (Generalized mass)
0
Rotational Work done by Friction
2
When do we only consider an object's rotational kinetic energy?
4
How can a rigid body's weight do work on it to make it rotate?
6
A bowling ball on an infinitely long track
1
Rolling motion, sliding, contact point, friction
0
Kinetic energy of system consisting of rod and rolling cylinder