What causes the block to move horizontally on a FIXED wedge

NET force is what is most important to body. Indeed in this case the object is moved down the surface by superposition of gravity and normal forces. Consider this picture : 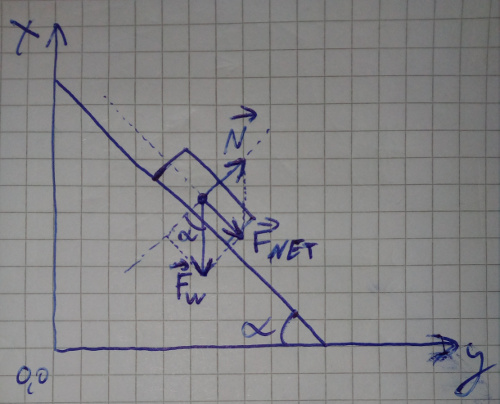 where $\hat{\textbf{u}}, \hat{\textbf{n}}$ are unit vectors of gravity and normal forces respectively

So when $\alpha=0$, then unit vectors cancels each other out completely, making net force zero,
and when $\alpha=\pi/2$, net force becomes $m\vec{g}$ - returning total control to gravity.

I have deleted my original answer, submitting the following instead in order to more directly answer your questions. In order to provide a more logical overall answer, I will answer your second question first.

But since gravity is only acting vertically downwards how can it cause an acceleration in the horizontal direction. Is the Normal from the surface of the incline the reason behind it. If so how?

Fig 1 below shows the block sliding down the wedge. To the right of it is a free body diagram of the block. Per Newtons's third law, the wedge exerts and equal and opposite reaction force to the normal force the block applies to the wedge. Since the wedge is fixed, the structure prevents it from moving so that the net force on the wedge is zero.

From the equations we can make the following observations: 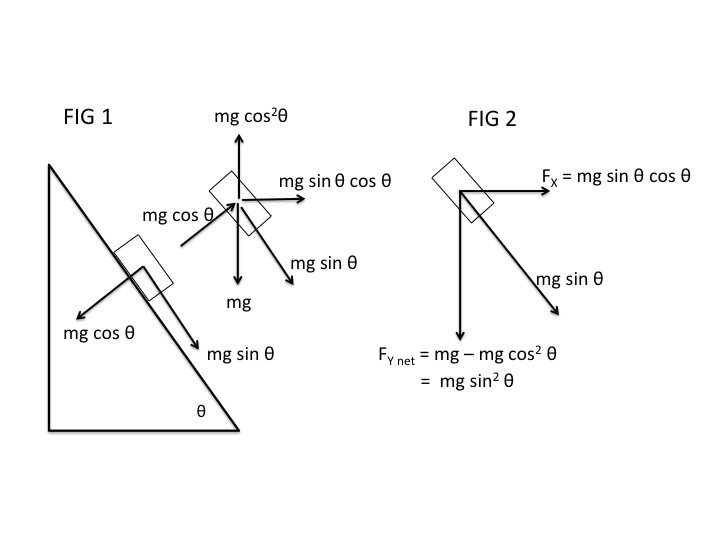 What force produces the acceleration down the plane?

What force produces the horizontal acceleration?

Not the answer you're looking for? Browse other questions tagged newtonian-mechanics forces acceleration vectors free-body-diagram or ask your own question.

1
I think there is something wrong with this problem. How do you know if the vertical acceleration is zero?
5
block slides on smooth triangular wedge kept on smooth floor.Find velocity of wedge when block reaches bottom
1
Work done by normal in case of a free wedge
6
Calculating the direction of friction on an inclined plane/Determining the fate of a round body on an inclined plane
0
The difference between a physical force and a component force