How is the speed of nucleons in the nucleus measured?

This article claims that "nucleons in a dense nucleus exceed 25 percent of the speed of light".

How do you measure or infer the speed of nucleons in the nucleus?

Note added later: I'm looking here for experimental techniques, that are as direct as possible. Using the uncertainty principle is of course valid, but it's not really what I'm looking for here, for two reasons:

If you shoot an electron or a proton at a nucleus at moderate energies (a few hundred $\mathrm{MeV}$ to a few $\mathrm{GeV}$) it will usually either bounce off the whole nucleus or break up the nucleus. But every once in a while (and this gets rarer and rarer the harder you throw it in) it will actually bounce off of a single nucleon. At the right energies this can happen without exciting the target nucleon (or the beam nucleon if you are using a proton beam), and still knock that nucleon right out of the parent nucleus without doing too much mischief on the way out.

These events are termed "quasi-elastic scattering" (not to be confused with the use of the same term in neutrino scattering).

Then all that remains is to computationaly remove the effects of the final-state interactions. Well, and we have to allow for the fact that a nuclear proton is slightly different from a free proton, and for that we rely on phenomenological models.

This is exactly the kind of data we took in my disseration experiment (our purpose was a little more subtle than just making the momentum measurement, but we got that for free). We took events like $A(e,e'p)$ using a $5$-$6 \,\mathrm{GeV}$ electron beam on protium, deutrium, carbon, and iron targets. 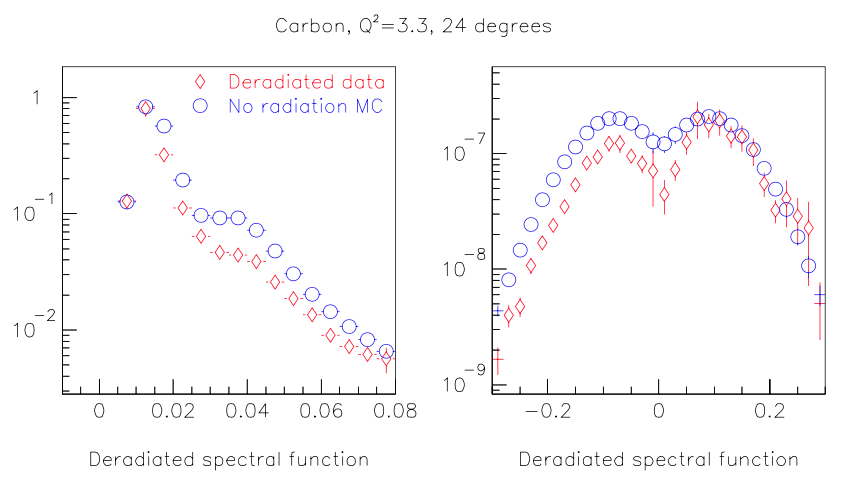 This figure appeared in my dissertation. It shows the processed result for squared momentum transfer of $3.3 \,\mathrm{GeV}^2$ on a carbon target.

There are a variety of ways of getting this kind of information. The simplest way to get a rough estimate is just to use the size of the nucleus and the de Broglie relation. A moderate-sized nucleus has a diameter of roughly 7 fm, so the lowest-energy standing wave would have a wavelength of 14 fm along any given axis $x$. Plugging in to the de Broglie relation gives $v_x/c\approx 0.1$ in this example.

[Side note: All nuclei have roughly the same density.]

This question and the answers really highlight the fundamental point that existing models don't really make a lot of sense for understanding the nucleus.
To get a sense of things, you need to start looking at nucleons and electro-magnetic entities in close loop form. deBroglie did a lot of work on this in the 1920's and main stream physics has really missed the bus on this since. The emerging physics section is quite close now to models that accurately predict a whole lot of nuclear parameters, often to with 8 decimal places, using this type of modelling.
We are not at the cusp of a major revision in nuclear models, with some really exciting new technologies likely to flow from this. subltleatomics.com/new-atomic-model

Not the answer you're looking for? Browse other questions tagged experimental-physics nuclear-physics measurements neutrons protons or ask your own question.

13
What is an intuitive picture of the motion of nucleons?

13
What do we know about the interactions between the protons and neutrons in a nucleus?
1
Arrangement of Nucleons due to Strong Force
1
Why do odd numbers of either of the nucleons in a nucleus make it relatively unstable compared to a nucleus having even numbers of both the nucleons?
17
Are nucleons discrete within a nucleus?
3
Magnetic moments of nucleons
14
Is an alpha particle four nucleons or dodecaquark?
0
formation of atomic nuclei from nucleons