Can a straight rod exist next to or inside a black hole?

A black hole is defined as a part of spacetime where gravity is so strong, that spacetime curvature reaches extreme levels. Not even light can escape.

Can anything straigt (3D) exist inside the black hole? I mean except the direction towards the singularity.

If a straight (3D) rod (not lying in the direction towards the singularity) enters the gravitational zone of the black hole, will it bend? 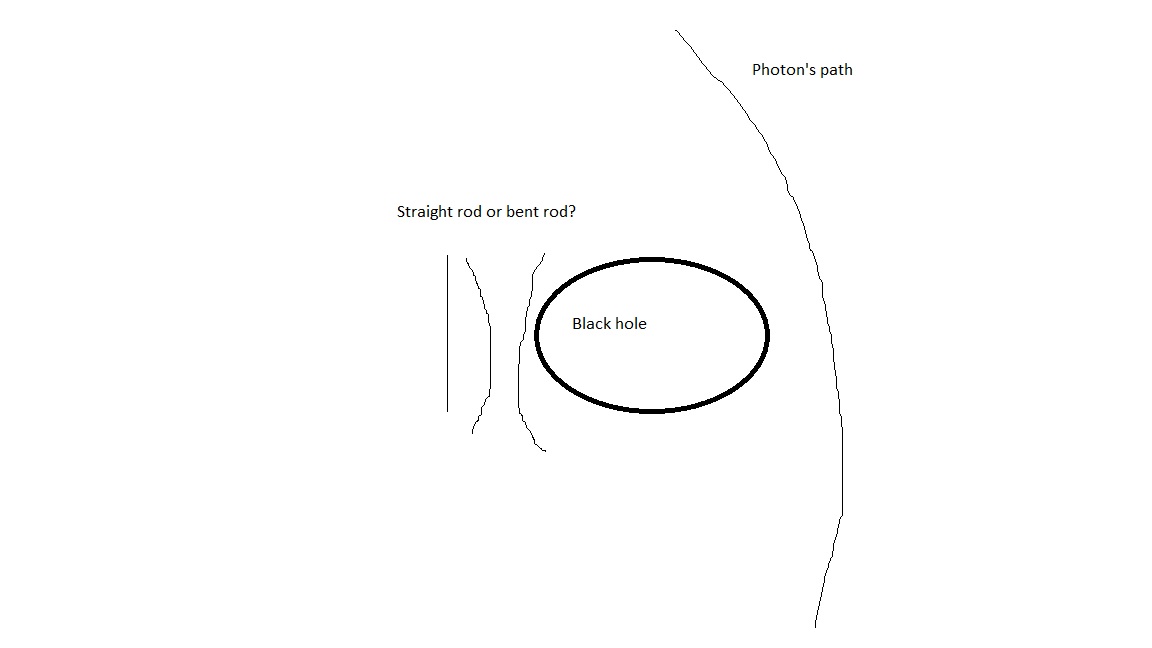 Gravity bends spacetime around the black hole as per GR, and even the photon's path gets bent (actually it is a straight line in 4D spacetime).

That depends on the rigidity of the stick, but since all the tidal forces are finite in the case of a nonrotating black hole in theory it should be possible to have a straight stick around it (in principle just like around the earth, where light is also slightly curved, but it is still possible to compensate for that on a stick).

One thing you'll have to choose is the geometric definition of a straight line, if you define it with a light ruler a straight line can also be a closed circle (if it goes exactly around the photon sphere), or you can define it as locally bent but straight in some arbitrary coordinate system, for example that of a stationary or free falling observer.

Closer to the singularity the differential of the local free fall velocity between the various parts of the stick will eventually exceed c (when exactly that happens depends on the lenght of the stick and the mass of the black hole), then the stick will have to bend (or break, if it is rigid).

With a rotating black hole it's a different story, since the differential of the frame dragging velocity from one part of the stick to another may exceed the speed of light even outside of the horizon (but inside of the ergosphere), in which case even a maximally rigid stick would have to break.

Not the answer you're looking for? Browse other questions tagged quantum-mechanics general-relativity black-holes curvature or ask your own question.

3
Why doesn't the curved spacetime curve the stick?
0
Does spacetime interval at event horizon become light-like for all trajectories?

8
Future light cones inside black hole
4
Entering a black hole, does the incident angle matter at all?
5
Curvature of space near a black hole
0
Any effects from touching Event Horizon?
20
If black holes are just empty vacuum of space inside, then what causes the curvature?