Confusion about torque and net force

This is a question I was trying to solve: A uniform disk of mass 1 kg and radius 1 m is kept on a rough horizontal surface. Two forces of magnitudes 2 N and 4 N have been applied on the disk as shown in the figure. If there is no slipping then the linear acceleration of the centre of mass of the disk is? 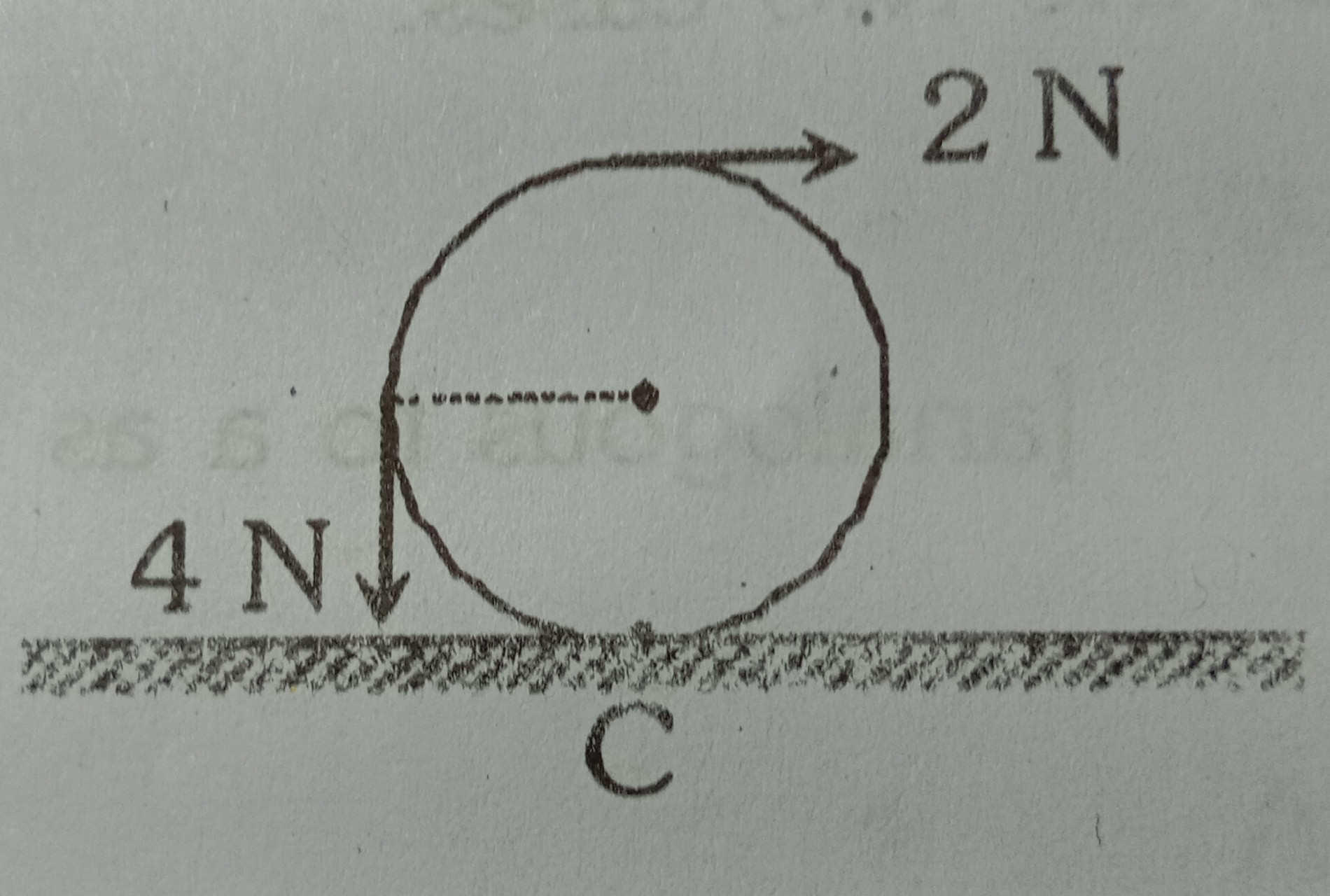 The solution offered here says that the torque about Point C is 4R- 2(2R)= zero, so the Net force is zero and hence linear acceleration of centre of mass is zero.

I don't understand how the net force becomes zero, just because the torque about point C is zero.

Any help is appreciated.

This is an example of a trick that often comes in handy when analyzing the motion of rigid bodies: if there's a single unknown force, compute the torques about the point where that force acts. Regardless of the magnitude or direction of the unknown force, it will contribute nothing to the torque, because the moment arm is zero. So, you can calculate the instantaneous angular acceleration of the body about the chosen point using only the known forces.

In this case, the forces have been chosen so that the torque about point C is zero: the two applied forces create equal and opposite torques, and the gravitational force acts on a line through point C, so contributes no torque. Thus, there's no acceleration about point C, and if the disk is initially at rest, it remains so.

I don't understand how the net force becomes zero, just because the torque about point C is zero.

Since there is no slipping, this means that the maximum static friction force at C has not been exceeded. That further means that there is a static friction force of 2 N acting to the left which equals the applied horizontal force of 2 N to the right. Or, the sum of the horizontal forces equals zero. The normal reaction at the surface acting up at C equals the weight of the disc acting down, so the sum of the vertical forces equals zero. Since there is no net force acting on the disc, it will not accelerate.

If you mean sum of the torques (sum of the moments), then the answer is no. In statics the preferred term is moment, but it is equivalent to torque since the moment about a point it is the product of a force times the perpendicular distance between the point and the force.

For the example given, to complete the conditions of equilibrium, there must also be no rotation. That means the sum of the moments (torques) about any point must equal zero. Taking the moments about point C you get 4R-2(2R)=0 per the solution. The static friction force acts through point C so it contributes no moment (moment arm=0) about point C.

So how does this condition of torque about point C satisfy the body not slipping?

The condition of sum of the moments (torques) addresses rotation. You can have pure rotation, without slipping. When the sum is zero, there is no rotation.

Hope this was not too long and that it was of some help.

Not the answer you're looking for? Browse other questions tagged homework-and-exercises rotational-dynamics torque rotational-kinematics or ask your own question.

0
Net torque on an object
2
A Confusion in Rotational Dynamics
4
Torque - Why does a block topple and net torque when net force is non-zero?
0
Does torque provide rotation?
0
Torque angular momentum equation in case of pure rolling
2
Why are wheels made to carry more mass on the circumference?
0
Angular momentum and collisions/pure rolling