Does resonance just depends upon the frequency of the external periodic force and the natural frequency of an object?

So, it was given that soldiers marching in unison go out of step while crossing a bridge to avoid any damage or collapse of the bridge.

Why is that the bridge will collapse if they march in unison? Their frequency won't necessarily be equal to the natural frequency of the bridge, and won't cause resonance or increase in the amplitude of the free oscillations of the bridge.

Further, if they don't march in unison and starts walking with different frequencies, then the chances of natural frequency of the bridge being equal to the walking frequency of one of the man would increase, and this could cause resonance and the collapse of the bridge, wouldn't it?

In April 1831, a brigade of soldiers marched in step across England's Broughton Suspension Bridge. According to accounts of the time, the bridge broke apart beneath the soldiers, throwing dozens of men into the water.

After this happened, the British Army reportedly sent new orders: Soldiers crossing a long bridge must "break stride," or not march in unison, to stop such a situation from occurring again.

Nowadays (since $50$+ years ago) are bridges constructed by design in such manner so their proper frequency is far away from the frequencies of human walking.

(So nowadays it has no meaning for armies to command soldiers for not marching unison on bridges. But most armies still keeps the obsolete directives in this field...)

If one soldier is marching in the frequency of bridge (which is not possible for contemporary bridges, as I wrote), then — you are right — the amplitude of bridge's oscillation by this soldier may increase, but even if all soldiers march with the frequency of bridge, but with different phase shifts, some of them increase, and some of them decrease the amplitude of the bridge's oscillation.

So, it was given that soldiers marching in unison go out of step while crossing a bridge to avoid any damage or collapse of the bridge.

Here is a notice on the Albert Bridge in London. 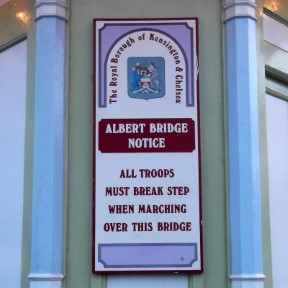 The Angers Bridge in France collapsed on 16 April 1850, while a battalion of French soldiers was marching across it, killing over 200 of them.

These are examples of resonance where the frequency of a periodic force (soldiers marching in step, wind induced aeroelastic flutter, etc) applied to the bridge is equal to one of the natural frequencies of vibration of the bridge - resonance.

Further, if they don't march in unison and starts walking with different frequencies, then the chances of natural frequency of the bridge being equal to the walking frequency of one of the man would increase, and this could cause resonance and the collapse of the bridge, wouldn't it?

Interestingly enough the oscillations of a bridge can influence how people walk across the bridge which via a positive feedback effect can then increase the amplitude of the oscillations.

Civil Engineering is an evolving science.
The Millennium Bridge for pedestrians across the River Thames in London was opened on June 10, 2000 and then closed a few days later due to excessive swaying.
It had been carefully designed and although a relatively flexible suspended structure it was though that there would not be a problem when pedestrians crossed it as the pedestrians would not all be walking it step at a frequency equal to the natural frequency of the bridge.
The design was such that vertical forces due to the pedestrians walking across the bridge would not produce a significant resonance effect.

The solution to the problems was to add dampers to the bridge which reduced the Q-value of the resonance - the energy of oscillation was converted into heat via frictional forces and the amplitude of oscillation was significantly smaller than before.

The paper Lateral excitation of bridges by balancing pedestrians gives an insight to the Millennium Bridge effect.

Since the natural frequency of the bridge ist unknown (an there may be several) the precaution is good. The force of one or a few men does not matter, compared with a full company.

Not the answer you're looking for? Browse other questions tagged harmonic-oscillator oscillators resonance or ask your own question.