Paradox on setting up charges on capacitors 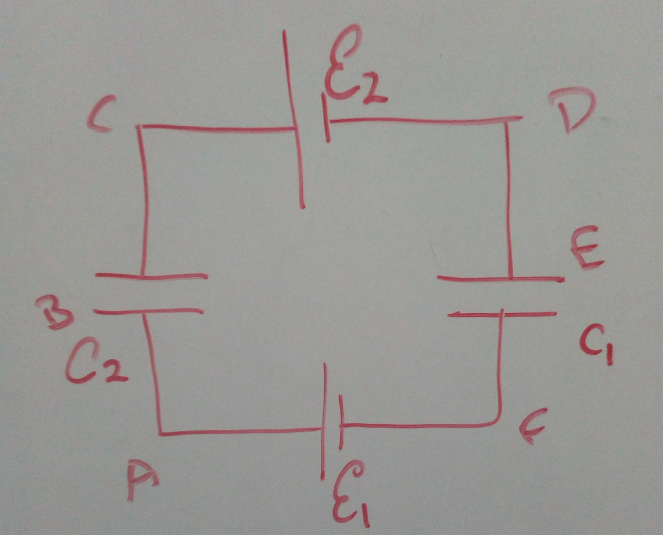 Staring with facts, 1)For a current to flow there must be a closed loop.

2)For a capacitor to be charged there must be a potential difference across it,

3)And obviously a charge must be transferred from some source to the capacitor while charging.

Considering a typical case as in the above picture,

1)How can a current flow from the battery to any one of capacitors to get it charged without a closed loop??

(It leads to an heavy confusion that the space between the capacitor doesn't conduct any current, Then how does the battery get triggered to release the charges??)

2)In capacitors C¹ and C² the charges are supposed to be equal as many textbooks regards, but why and how could it be??

1)How can a current flow from the battery to any one of capacitors to get it charged without a closed loop??

First of all, if the circuit shown in your diagram has existed for a long time there will be no current flowing. That is because the voltages across the capacitors will not be changing in time. The current in a capacitor is given by

If the voltage across the capacitor is not changing in time, there will be no current. The capacitor looks like an open circuit in dc circuits after any transients (time changing voltages and currents) have died out, which is the situation after a long time.

But if the capacitors originally start out not charged, or not fully charged to the potential of a battery, current will flow once switched onto a voltage source. The battery pulls charge from one plate and pushes that same charge onto the other plate, creating a net positive charge on one and negative charge on the other. To do this the battery does work. The energy of that work is stored as electrical potential energy in the electric field between the plates as well as dissipated as heat in resistance that is always present in a circuit.

It is this process of pushing and pulling charges that results in current flowing in the conductors connecting the capacitors to the batteries, even though though charge does not actually move between the plates within the capacitor.

2)In capacitors C¹ and C² the charges are supposed to be equal as many textbooks regards, but why and how could it be??

So the voltages and charge can be calculated.

Not the answer you're looking for? Browse other questions tagged electric-circuits electric-current capacitance or ask your own question.