Here is the question: Do all radioactive decays follow that relationship in the real world?

The second one can be easily broken, for example by having the atoms to be produced in another process (as is the case with $\,^{14}C$). The first one is usully true, as the atoms aree usually far enough from each other to not affect their decays. However, in some cases, when they are more concentrated, it is possible for them to affect one another, and something like a chain reaction may happen (even in natural situation, like in the uranium deposits in Oklo.

On a trivial level it might be that the rate of change of $N$ may not follow such a relationship because (a) there are multiple decay routes, (b) another process/decay is producing $N$ at the same time.

A less trivial point is that the relationship may only be strictly true in a vacuum. For instance, if we take the example of beta decay, the electron that is produced must occupy a quantum energy/momentum state according to the total energy it has after the decay. If this state is already occupied then the Pauli Exclusion Principle would forbid that particular channel.

Of course the decay probability is actually an integral over all possible states, but nevertheless, if a nucleus is surrounded by a degenerate electron gas, then it may not be possible to beta decay if the electron Fermi energy is high enough.

This situation pertains in the crusts and interiors of neutron stars, where the degenerate free electrons have Fermi energies of tens to hundreds of MeV. This results in the presence of very massive, neutron-rich nuclei (in the crust) and a fluid composed mostly of neutrons (in the interior), because the beta decay process is highly suppressed.

The statement holds for particles decaying in their center of mass system. For a sample of atoms either in a solid or in a liquid or gas at rest, it holds true.

Once high velocities are considered one has to use special relativity, and then the apparent lifetime as measured in the lab will change, according to the equations of special relativity because of time dilation. So a relativistically moving radioactive atom will seem to live longer, and in that way would have a different λ .

Note the definitions of lifetime and λ, as @AgniusVasiliauskas says:

λ is decay rate defined as λ=1/τ, where τ is mean lifetime, defined as time at which the population of the assembly is reduced to 1/e

When comparing dates of artifact extracted from $^{14}\text{C}$ isotope decaying method and from dendrochronology method - one sees that radiocarbon dating method gives very inaccurate dates of samples which are older than $3000$ years. Standard explanation to this is that at ancient times atmospheric ratio of $ {^{14}C}/{^{12}C}$ was different than that of now. However, there are other approaches to this problem too. This paper in 2012 year proposes alternative explanation,- that on long time scales, slow decay process exhibits a non-linear behavior, thus so attributing to incorrect radiocarbon dating conclusions when decay law is analyzed only exponentially. More concretely - they proposes such decay law : $$ \frac{dN}{dt} = -\alpha N + g(N,\theta,t) $$ where term $g()$ attributes to non-linear decay part, which affects long-term, slow-mode decay. However : 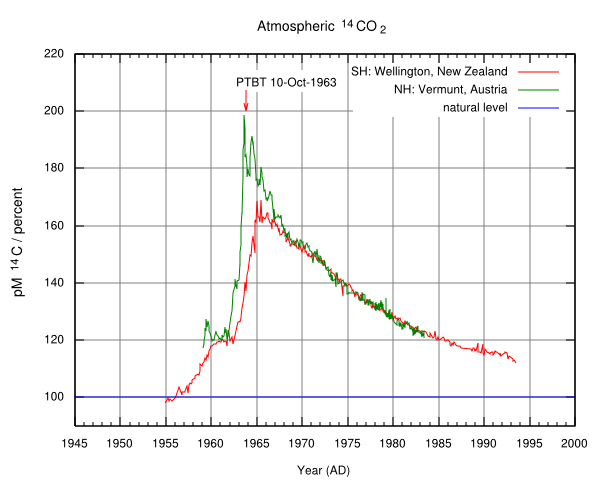 Thus for creatures who have lived and died in atomic bomb test places roughly in period $ 1955-1995 $,- radiocarbon creature age dating method will not work too, at least without including a-bomb tests effects.

Not the answer you're looking for? Browse other questions tagged nuclear-physics radiation differential-equations radioactivity or ask your own question.

5
Radioactive decay, why such unintuitive formula?
6
Radioactive Decay
5
Number of decays in a chain reaction
4
Is there no radioactive decay between nuclear fusion and solid material formation?
2
Decay/Counts/Number of Nuclei
2
Can we observe proton decay?
2
How much radioactive decay in thoriated TIG rod (and total for decay chain)?
1
Is $T_{decay}$ the time it takes for an amount of radioactive nuclei to decay $\it{completely}$?
1
Radioactive Tracer - calculate fraction that decay before excretion
2
How can integration be used in deriving radioactive decay formula?