Why is it that sound at standard conditions always travels the same speed?

Say you have a small fire cracker. When it explodes, it imparts some kinetic energy to the surrounding air molecules, and they propagate that kinetic energy outward through collisions.

Intuitively, I feel that if you have a bigger fire cracker that imparts more kinetic energy, then the air molecules should move faster and collide faster with their neighbors, so the speed of sound would be faster in that case.

Of course, this isn't correct - the speed of sound is pretty much constant for a given density and pressure.

Could someone help me build a better mental picture of what's happening?

"Sound" is due to something moving slower than, well, the speed of sound. "Shock waves" travel faster than that.

Really Big explosions can create shock waves that move faster than sound for a long way, but your firecracker examples are just the usual form of sound-based noise.

To put it another way: The energy of the firecracker is tiny compared to the energy of the air molecules. A cubic meter of room-temperature air is about 1 kg of molecules, each with thermal velocity of 460 m/s. That's about 100kJ of energy. The fire cracker is much, much less than that, and the sound is spread over much, much more than that.

The speed of sound $v$ in a material is given by: $$ v = \sqrt{\frac{B}{\rho}},$$ where $B$ is the bulk modulus (quantifying how easily compressible the medium is) and $\rho$ the density of the medium. This formula applies for "normal" propagation away from the source. In this region, we can assume $\rho$ and $B$ to be constant.

Sound is an oscillation of the air (or whatever medium) molecules, i.e. a sequence of rarefactions and compressions:

The amplitude of the oscillation is what gives sound volume: a large amplitude means a great difference in pressure between the compressed and rarefied region, i.e. a big force on the eardrum, which causes pain and possible rupture.

This amplitude is dictated by the initial energy of the event creating the sound wave, in this case the explosion of the firecracker. But it does not necessarily change the speed of sound itself.

Think of an harmonic oscillator: 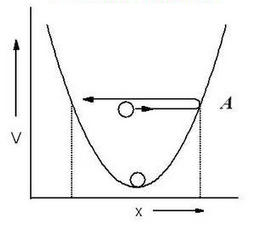 The period (frequency) of oscillation is always the same. A higher kinetic energy of the particle just causes a larger amplitude of the oscillation, i.e. the ball has a higher turning point. But it takes the same time to cover an entire period.

So a more powerful firecraker results in a larger amplitude of the oscillation, i.e. a louder sound and a stronger pressure differential between compressions and rarefactions. Away from the source, however, the speed of this oscillation is the always the same. As for the period of a harmonic oscillator.

Close to the source: shock waves

Close to the source of the explosion, you cannot. The abrupt release of energy in a limited space can dramatically alter the characteristics of the medium, such as its density.

This leads to shock waves: 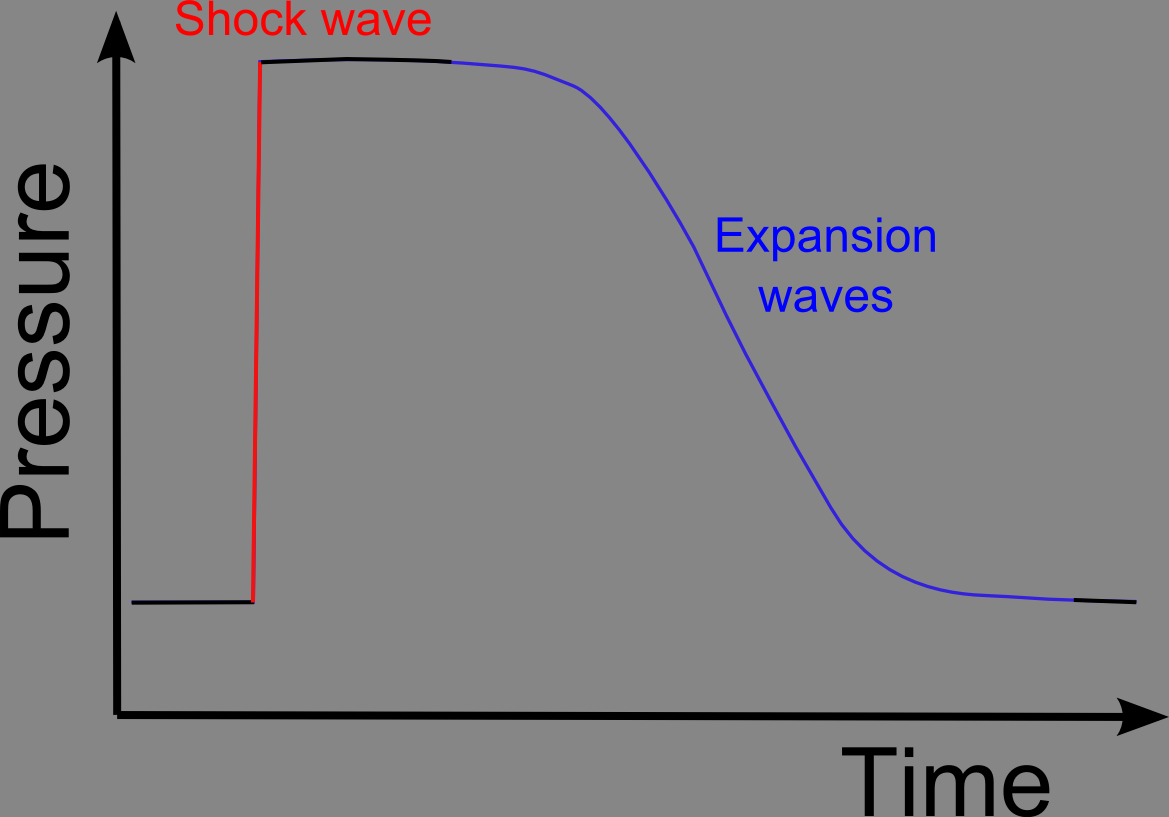 The "expansion wave" is basically what I call "away from the source".

The shock waves cause a rapid change in the density of air $\rho$, which result in a change of refractive index, like in here: 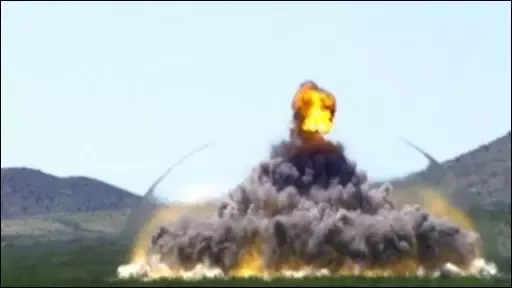 The speed of sound is the speed of propagation of a pressure wave created when a disturbance is made. The speed of this pressure wave is determined by the material, the density, and the temperature of that material. A given material has a speed at which a pressure wave travels. The example of a firecracker is useful because the magnitude of the explosion does not affect the speed but it does affect how many molecules were accelerated directly and hence the volume. This results in an increase in the intensity of the sound. The stronger an explosion the louder the sound and hence stronger the pulse. You can also distinguish in the characteristics of the sound-producing disturbance. Some noises have a high pitched sound as opposed to a lower-pitched sound.

2
Why Shock wave propagation is faster
4
Shock-waves, Bangs and the Speed of Sound
4
What is the mechanism that moves an air molecule backwards in a sound wave?
0
Why does the speed of sound relate to temperature in increasing altitude?
29
Why is the speed of oceanic waves not a constant like sound?
0
Sound Waves and the Boltzmann Distribution
1
Is the sound of hammering nails louder since it travels through the walls?