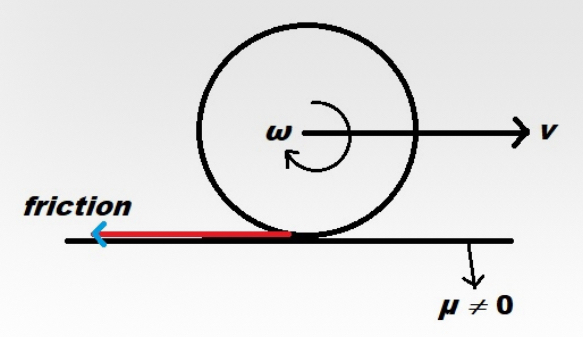 Just to be clear, static friction only enables the wheel to turn without slipping when a torque is applied to the wheel axle.

But if, say, you take the wheel off a bicycle or a car and set it into rolling motion on a perfectly level surface, after you release it there is no torque applied to the wheel axle and therefore no static friction between the wheel and the road to oppose the force due to torque. The only friction acting on the wheel is rolling friction.

Now this friction opposes its translational motion, so the object slowly stops rotating, but this friction provides a torque to the body which should give it some angular acceleration

Ignoring air resistance and any friction at the axle, it would then only be rolling friction that slows the wheel and nothing to keep it moving, in the absence of an applied torque, except its inertia. Rolling friction is due to the inelastic deformation that the rubber of the tire experiences when it is in contact with the road. It in involves friction heating. The kinetic energy of the coasting wheel will be converted to rolling friction heating slowing the wheel down.See this article on rolling resistance from Wikipedia: https://en.wikipedia.org/wiki/Rolling_resistance

If this angular velocity is increasing its linear velocity should also increase, but this doesn't happen. Why is this so?

Your image is incorrect. The force marked "friction" on the image should be labeled "force caused by torque". A different line directed forward would be the static friction force that resists slipping between the wheel and surface allowing the wheel to accelerate. What you label "W" should be labeled "torque on wheel".

Bottom line: If there is no torque applied to the wheel (a coasting wheel), there is no static friction and the thing that keeps the wheel moving is its inertia. The thing that slows it down is rolling friction which dissipates heat at the expense of the kinetic energy (and therefore velocity) of the wheel.

If you let the object go on this ideal surface, it would not slow down. It would keep on rolling at a constant speed. However, on a non-ideal surface there is kinetic and rolling frictions involved that can dissipate energy and slow the object down. This is probably what you are thinking of.

As we know, when an object perform pure rolling on a plane having friction the friction acts on the edge in the direction opposite to the direction of its translational motion.

This is incorrect. Friction acts in opposition to relative motion between two surfaces. This means that even though the object may be moving to the right, the bottom surface could be moving (or trying to move) to the left. Knowing the ball is moving to the right is not enough to determine the direction that friction might be acting.

For a ball on a horizontal plane in isolation (no other forces), friction acts to couple the translational speed and the rotational speed of the ball. Once these two are in sync, static friction goes to zero. (We are ignoring "rolling friction" or drag).

Static friction reappears if anything gives a torque or a horizontal force on the ball.

The condition for pure rolling / no slipping is $v_{\rm pure}= r\,\omega_{\rm pure}$ where $r$ is the radius.
There is no frictional force at the point of contact.

An interesting exercise, and perhaps a surprising result, is to predict the direction of the frictional force as an object is undergoing pure rolling up an incline?

Similarly, for flow of a fluid in a pipe, the "no slip" condition typically assumed in basic fluid dynamics, means there is no relative motion of the fluid at the pipe surface, hence the force of friction at the pipe surface does no work on the fluid.

In both cases, the force of friction does have an effect. For rolling friction it provides a torque causing rotation of the object; for flow in a pipe it causes velocity gradients in the viscous fluid resulting is loss of pressure.

Other cases for forces that do no work are when the force vector is perpendicular to the motion vector; such as the inward centripetal force on a particle in uniform circular motion (not a charged particle which radiates energy when accelerated in a circular motion).

3
How can angular velocity be constant even when there is a torque by friction?