How do Astronomers Measure the Mass of a Planet using Doppler Spectroscopy?

So, I am making an essay explaining planet-hunting techniques. And while I do get how astronomers measure the semi-major axis of a planetary orbit (using Kepler Laws), I don't get how they measure the planet's mass.

The planet and the star both rotate around their center of mass. That's how star "wobbling" occurs. When the star in our line-of-sight moves away from us, photons reaching us are red-shifted and when the star moves towards us, its photons are blue-shifted - this is the so-called Doppler effect. The star mass $M$ is extracted from its spectrum, luminosity and other parameters. Then over the years, astronomers measure the radial velocity of star, which is extrapolated from the Doppler effect. 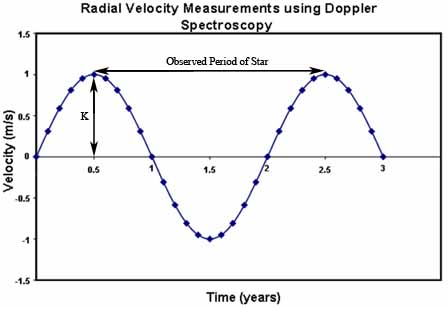 Given this data, one can calculate exoplanet mass (given that I haven't made any formulas substitution error):

where $i$ is inclination - angle between reference plane and orbital plane.

The equation above is suitable only if the exoplanet orbit is circular. This is rarely the case. According to this article, ones needs to take into account orbit eccentricity when it is elliptic. We need to make yet another assumption, that $ \frac{m}{M} \ll 1$, for example $ m_{earth}/M_{sun} \approx 3.004×10^{-6} $. ("$\ll$" means A LOT smaller than). Assuming that, planet mass can be reduced to:

where $e$ is orbital eccentricity

I am not an astronomer, but I would measure the wobbling of the surounded star, the mass of the star known by its spectrum.

Not the answer you're looking for? Browse other questions tagged orbital-motion astronomy spectroscopy doppler-effect exoplanets or ask your own question.

1
Non-discoveries by the Kepler space telescope: exomoons, co-orbital planets, trojans
0
How can I calculate the semi major axis from velocity, position and pull?
0
Which Kepler laws might change with the Universal Gravitational Constant?
3
How Can I Calculate the Speed Required for an Orbiting Planet to Pass Through a Given Point in Space?
1
How to calculate the sphere of influence of a planet?
2
How can spectroscopy be used to find the composition of exoplanet atmospheres?
7
Are orbital eccentricities in a binary system always the same?