(Lifting of aircraft wings) Source of centripetal force on a curved streamline?

I am trying to understand how wings lifting work in airplanes. One explanation is found here 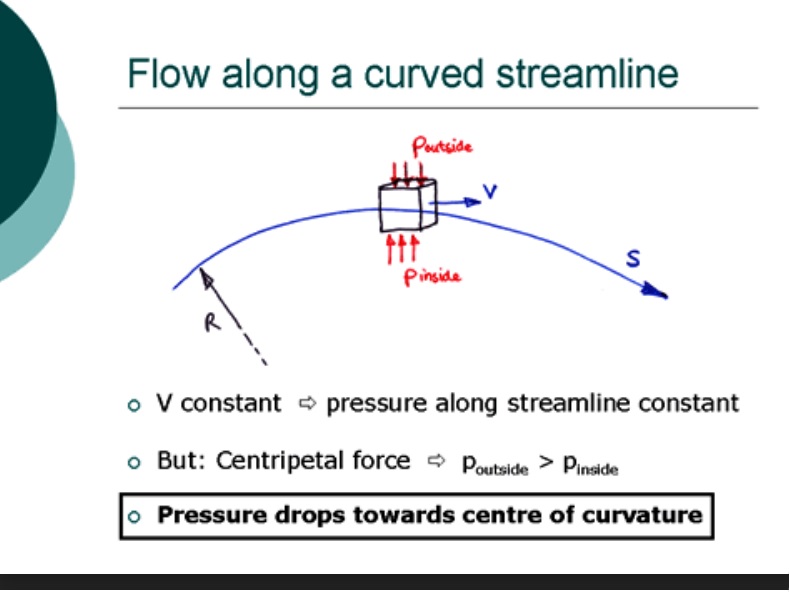 My question is, fundamentally what causes this pressure difference? In case of a stone attached to a string, the centripetal force is provided by the tension (electromagnetic in nature) in the string, in case of planets moving around the sun, this centripetal force is Gravitational force. Similarly in case of curved streams (I agree that there is a pressure difference) what exact forces are involved?

Note: The corresponding youtube video does not show the slides thanks to glitches in camera. So it is to be watched along with separate slides

The author explains everything in the article here

I have seen some answers on wings lifting, but those are either very complex or they have not explained in terms of centripetal forces in this particular case.

The centripetal force is caused by the local wing surface having a greater inclination than the local streamline. In order to follow the wing contour, the streamline needs to curve around it. This inclination can either be caused by camber or by angle of attack. It is important, however, that it changes gradually in order to avoid flow separation. That is the reason why wing airfoils have a rounded forward edge.

If at first the pressure is high here and low there, the flow changes to correct that.

For example, initially horizontal flow over a curve or angle of attack would leave a vacuum below. That pressure difference bends the flow down, but moves air into the low pressure region raising it a little. This continues until equilibrium is reached.

(Its a bit like how stable currents arise in a DC circuit: if it’s too much here and too little there, electrical forces arise that try to push things back)

When a parcel of air, along it's streamline in a flow, curves due to the presence of an obstacle, it must develop an acceleration toward the center of the curvature, because $F=ma$. It's that simple. Not because of gravity. There is pressure around the the parcel. A change in flow speed requires a pressure difference, and same thing about a change in flow direction. The only thing that can change a velocity vector is a difference of pressure. Air has mass. So if a change of direction occurs, there must be a force to balance it. Which, in this case is an acceleration toward the center of curvature. Lift is a mechanical phenomena, it requires the deviation of a flow to occur. When a flow turns to follow a curved surface, the pressure field adjusts to provide the force needed to accelerate the parcel toward the center of curvature. the force exerted is normal as in every fluid. Deviation, changes in flow speed and pressure cannot exist without one another, and they support and cause each other in a mutual, circular and reciprocal way.

The curved surface here is similar to the wing.

I think the lecturer that you link to did himself a disservice by mentioning the concept of a centripetal force.

I recommend that you drop the idea of attributing the air flow to some centripetal force.

The particular cross section of a wing is good for efficiency, but simpler shapes can produce lift too.

For aerobatics performance you want wings that can readily produce lift both when they are right side up and when they are upside down.

Aerobatics aircraft wings are very flat; if the top of the wings would be curved like normal wings then flying upside down would be more difficult. The wings are almost like flat boards. Those wings will certainly leave a lot of turbulance in their wake, which of course is wasted energy. Normal aircraft wings are designed to minimize energy waste, that is the reason for the shape of the cross section

This demonstrates that the primary mechanism of wings producing lift is the angle of attack. Every wing, be it a normal wing or an aerobatics wing must have an angle of attack in order to produce lift at all.

Of course, understanding angle of attack is very straightforward. For instance, when you are in car traveling at highway speed stick your hand out the window. You feel the lift.

The whole issue of wing lift should always be discussed in terms of the following two separate issues:
- What is it that produces lift: angle of attack
- How do you optimize lift/drag ratio: that requires thorough understanding of aerodynamics

Let me elaborate on the implications of angle of attack. Using the example of a hand sticking out of car window: you hold your hand at an angle such that you try to optimize lift/drag ratio. At that angle of attack two things are happening: compression of the air moving underneath, rarefaction of the air moving over the hand. The compression and the rarefaction are counterparts. While the compression is very palpable the rarefaction is something you will not readily notice. However, the rarefaction is as important, if not more important. As long as the air flow over the hand doesn't become detached it will be deflected downwards, just as the compressed air moving underneath is deflected downwards. If the angle of attack is too large the air flow over the wing does become detached, it becomes turbulent, resulting in catastrophic loss of lift.

Later edit:
A webpage with a description of the design of the Mudry CAP 232 aerobatics aircraft

The Cap wing [... ] uses a symmetrical airfoil cross section [...]. The CAP wing has the same curvature on the top and the bottom surfaces. [...] this CAP symmetrical wing works equally well whether the angle of attack is [...] upright or inverted. And the stall speed is the same both ways. This makes axial rolling more precise.

Not the answer you're looking for? Browse other questions tagged fluid-dynamics aerodynamics centripetal-force lift or ask your own question.

5
Why do aircraft inner wings lose lift when turning?
20
Does a wing in a potential flow have lift?
0
When is it appropriate to drop pressure terms when applying conservation of momentum to a fluid?
3
Could a Jumbo Jet aircraft fly on paper wings?
2
What provides the centripetal force?
1
Vorticity and Shear - Irrotational and Rotational Vortex's
5
What causes the air speed difference above and below the wing of a plane?
0
Is gravity the Earth's centripetal acceleration? Should the gravitational acceleration be equal to the centripetal acceleration at the equator?