The Chernobyl reactor was designed to produce a maximum of 3.2 megawatts of power. It is now estimated to have produced 3.2 gigawatts of power in the final second of its life.

The original hypothesis is that the the explosions at Chernobyl were either steam/steam or steam/hydrogen explosions.

A new hypothesis is that the first explosion was actually a small nuclear detonation of the runaway fissioning. The total energy released in the first blast was 320 gigawatt thermal.

This new hypothesis is based on observations from witnesses who were nearby and saw the explosions. The first explosion turned the air blue from fluorescence of excited oxygen and nitrogen atoms in the air.

Is there a way to determine how powerful the explosion was? Also is it possible this was a quasi atomic explosion due to runaway fissioning?

The paper I am reading is linked below.

Nuclear reactors have too low uranium enrichment to be capable of nuclear explosion, not even a detonation(explosion with supersonic velocity of propagation).

But the thermal power of uncontrolled fission may lead to mechanical explosion by pressurised gas or water vapour, or there can occur secondary chemical explosion by ignition of developed and escaped hydrogen.

Explosion can be defined as very fast energy release, with extremely high power and very short time duration, with sharp begin and end.

Detonation is explosion propagating in exploding material by speed exceeding speed of sound in material. Additionally, explosion is not matter of total released energy but matter of way how it is released.

If it could, the detonation would not be small, but huge, temperature would reach some 100 millions K instead of few thousands and all power plant and close neighborhood would evaporate.

Overheating of pressured casserole, just little bigger and dramatic for lifes of too many people.

That means, if the power of energy being released is just in range of few multiples of nominal power, being increased gradually and continually, it can hardly be consider as a nuclear explosion.

OTOH, the sudden reactor break can be, but as a mechanical explosion, even if based on originally nuclear energy.

A nuclear reactor cannot explode like a nuclear weapon. For a thermal reactor -like Chernobyl- the neutron generation lifetime is too long. For a fast reactor (and a thermal reactor) there is no mechanism for creating and maintaining a super prompt critical assembly sufficiently long for significant release of energy from fission. You have to really work hard to assemble the correct material to create a nuclear weapon; you need to create a system that is super prompt critical using fast neutrons and remains so sufficiently long for the chain reaction to produce enough energy before pressure causes dis-assembly into a non-critical configuration. By super prompt critical is meant super critical on the prompt neutrons alone without having to wait for the delayed neutrons to contribute. See the Los Alamos Primer by Serber, available from Amazon: the early notes on the physics of a fission weapon from Los Alamos at the beginning of the Manhattan project.

For a nuclear reactor, the safety concern is the removal of decay heat from the radioactive decay of fission products after the fission process is terminated. Decay heat is about 5% of full power at shutdown.

A major problem with the Chernobyl design is the core was over-moderated. Specifically, the graphite was the moderator and the cooling water was not needed as a moderator and in fact acted as a neutron poison. So when the cooling water was lost the reactor power increased: positive feedback. The old N reactor in the US was a graphite moderated, water cooled reactor used to produce Pu for the weapons program, but was specifically designed to not have this problem.

In nuclear engineering, prompt criticality describes a nuclear fission event in which criticality (the threshold for an exponentially growing nuclear fission chain reaction) is achieved with prompt neutrons alone (neutrons that are released immediately in a fission reaction) and does not rely on delayed neutrons (neutrons released in the subsequent decay of fission fragments). As a result, prompt supercriticality causes a much more rapid growth in the rate of energy release than other forms of criticality. Nuclear weapons are based on prompt criticality, while most nuclear reactors rely on delayed neutrons to achieve criticality.

Accidental nuclear explosions are not a new thing.

On January 3, 1961, SL-1 was being prepared for restart after a shutdown of eleven days over the holidays. Maintenance procedures required that Rod 9 be manually withdrawn a few inches to reconnect it to its drive mechanism. At 9:01 pm, this rod was suddenly withdrawn too far, causing SL-1 to go prompt critical instantly. In four milliseconds, the heat generated by the resulting enormous power excursion caused fuel inside the core to melt and to explosively vaporize.

The paper you linked states:

This paper renders the following hypothesis. The first explosion consisted of thermal neutron mediated nuclear explosions in one or rather a few fuel channels, which caused a jet of debris that reached an altitude of some 2500 to 3000 m. The second explosion would then have been the steam explosion most experts believe was the first one.

The idea that Chernobyl involved a prompt criticality at some point was known long before that paper was published. For example, AS Dyatlov, Chernobyl engineer and witness, wrote in his 1991 memoir Chernobyl: How It Was (chapter 1)

At 01:23:47 the reactor was destroyed with an acceleration of power on prompt neutrons. This collapse was the worst possible catastrophe in an energy reactor. No one could comprehend it, no one was prepared for it, no technical measures for localization of the unit and station had been stipulated. Nor were there any organizational measures.

In a magazine article published that year, he makes it clear that this was the first explosion, consistent with your paper.

The main circulating pumps kept up a flow of coolant right up to 01:23:46, when due to a sharp power rise the flow rate through the running down main circulating pumps (loop 1) and then that through the other pumps dropped. The pressure in loop 1 went up. At 01:23:46 or 01:23:47 a large explosion was heard and, one or two seconds later, there was another one, which in my perception was even bigger. And then the silence fell.

Owing to the design characteristics of the reactor, substantial damage to a few fuel assemblies (three or four fuel assemblies are enough) can, and in this case did, lead to the destruction of the reactor itself and the failure of it's emergency protection system. The rupture if the pipes of several fuel channels lead to an increase in pressure in the reactor space and partial detachment of the reactor support plate from the shroud and consequent jamming of the RCPS rods which by that time were only half way down.

Note: The "reactor space" mentioned above refers to the unpressurized space surrounding the fuel channels

That the above was indeed caused by prompt criticality is suggested by analysis results published in the report. 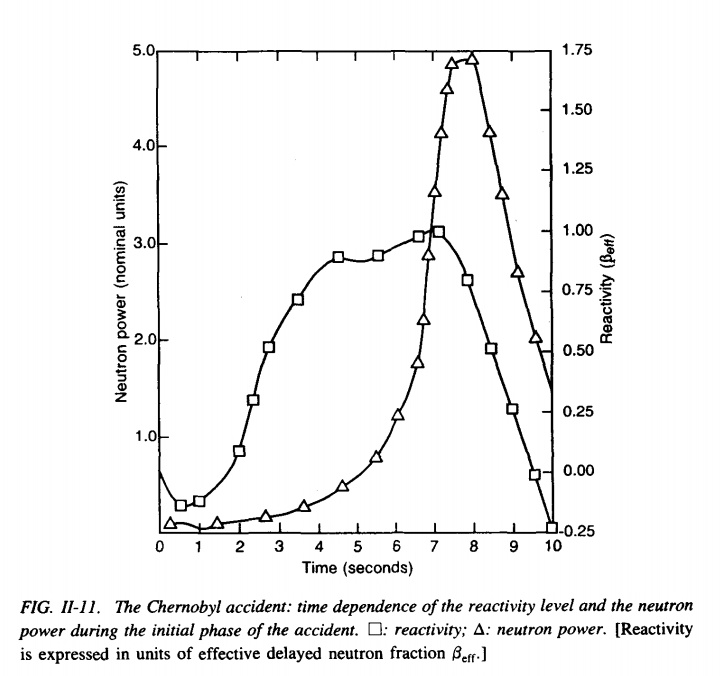 At the moment of the blast (or immediately afterwards) the control rods stopped moving...

From the above, a picture of the first, less dramatic explosion emerges of a localized prompt criticality causing a violent steam leak.

That the prompt criticality and steam leak were both part of the first explosion, rather than two separate explosions, is evidenced by eyewitness accounts and seismic data presented in your paper, both of which suggested a double blast as the first explosion.

This was the more destructive explosion. Ruling out steam, we have two possible mechanisms for the explosion: hydrogen and nuclear.

The core at this point still existed, but the water had already leaked away through the gap between the side walls and the dislodged reactor lid. The very large void effect of reactivity could them allow a second much larger prompt criticality event.

This is supported by the graph below, also taken from the IAEA report. 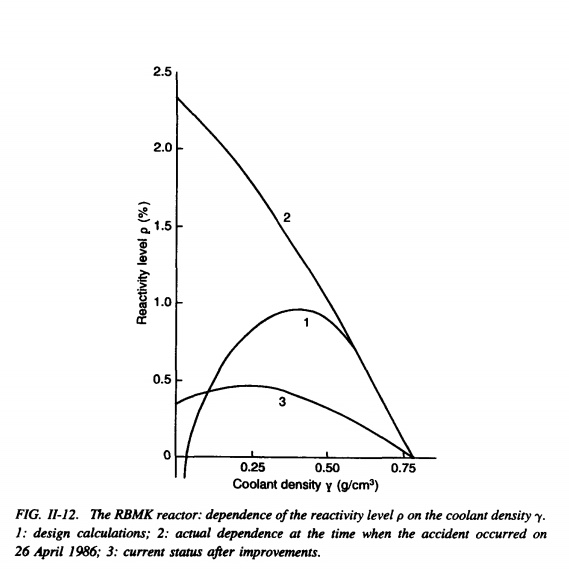 Not the answer you're looking for? Browse other questions tagged thermodynamics nuclear-physics radioactivity nuclear-engineering explosions or ask your own question.

13
Pictures of nuclear explosions some milli/nano seconds after detonation
2
How powerful would an explosion have to be for its effects to be felt worldwide?
0
Could you cause a small "nuclear" explosion manually
0
Can an atomic bomb/rocket with nuclear warhead's nuclear explosion be triggered by a conventional explosion close to it?
33
How large would the steam explosion at Chernobyl have been?