Why is the answer to this diffusion example unintuitive?

for all x, from left to right, we have the same flux amount because the decrease is linear.

According to Fick's second law,

so dJ/dx is just 0 since the 2nd derivative of a line is 0. Yet this seems unintuitive. I would expect as long as there is a concentration gradient, there should be a change in concentration at each point until the concentration is completely uniform. There must be an error in my math or reasoning, where is it?

To clarify the boundary conditions, imagine a closed box with no out flow or in flow at the edges.

As Ted Bunn said, the linear concentration profile is only a steady state if there is a steady inflow at one end and a steady outflow at the other. This net flow is what preserves the concentration gradient.

With the "closed box" boundary condition instead, there is indeed an error in your reasoning because the linear profile is no longer a steady state. So, to make things explicit, you should have instead:

However, these results do not imply that $\psi(x)$ is always constant. At time $t=0$, there is a constant flow from left to right, but because the box is closed this means that the concentration at the left edge of the box is decreasing and the concentration at the right edge is increasing (even though it hasn't yet begun to change anywhere in the interior - If you want, you can say that $\partial\psi/\partial t(t=0)$ has the form of two Dirac delta functions).

The only way I know to get the full solution is expanding in a Fourier series. For concreteness, say the box extends from $x=-1/2$ to $x=1/2$. The correct basis of eigenfunctions to use for this boundary condition contains functions whose derivative is zero at the edges of the box, namely $\sin(n \pi x)$ for odd n and $\cos(n \pi x)$ for even n. Since the initial condition is an odd function, the cosines don't appear. Also, for convenience, set the initial slope equal to $\pi^2/4$.

where $\tau$ is a time scale that depends on the diffusion constant and dimensions (if you want, I can work out what it actually is, but it's irrelevant for the discussion).

If you plot this function at different $t$ values increasing from zero, you can clearly see that the concentration is becoming smoothed out and tending toward a uniform concentration of the average value, $\pi^2/8$.

Thus, even though at $t = 0$ it seems like the concentration isn't changing anywhere ($\partial\psi/\partial t$ = 0), it immediately begins changing, and diffusion does eventually lead to a uniform concentration.

Here are some plots I made, using terms through $n=15$: 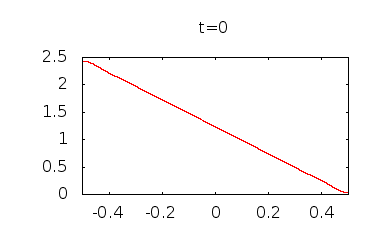 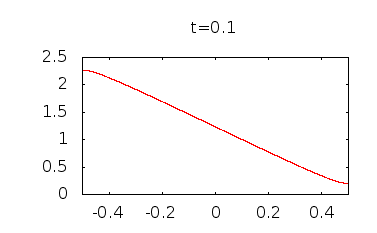 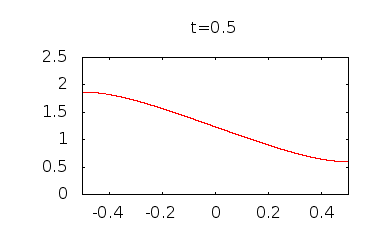 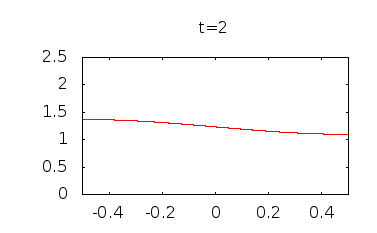 The error is in your intuition. Your calculation is correct.

One thing that might help your intuition is to think about what happens at the edges of the region under consideration. There must be a steady inflow from one end and a steady outflow from the other end. Fluid is continually flowing "downhill" (from high concentration to low), but the source at the "top" constantly replenishes things, so the concentration gradient remains.

I don't know if that helps, but it's the best I can do.

Not the answer you're looking for? Browse other questions tagged fluid-dynamics diffusion or ask your own question.

5
Diffusion of gas in a liquid with changing pressure and solubility (chemical potential)
5
Why viscosity is diffusive?
1
Does the diffusion coefficient depend on units of concentration?
0
What is the maximum flux in Fick's diffusion?
1
Why is flux at an interface purely diffusion?
1
Implication of velocity of Wiener's process on diffusive flux
1
Fick's law should contain a factor 2, but it doesn't. Why?