Is the vector potential component $A_\phi$ for a dipole necessarily 0 due to symmetry about the $z$-axis? 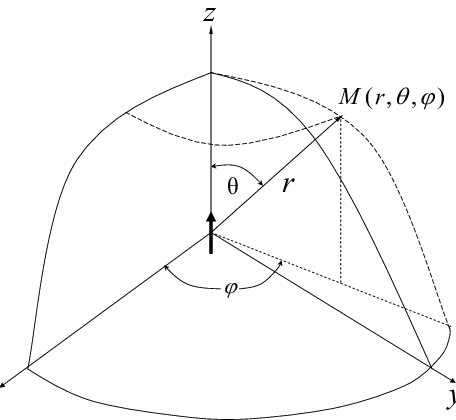 Couldn't $A_\phi$ be a non-zero constant too? The only constraint I see on $A_\phi$ is that it should be independent of $r$ and $\theta$. Or is $A_\phi = 0$ simply a choice taking advantage of gauge invariance; that is, no matter what constant $A_\phi$ is it wouldn't change the curl. If so, how to prove it?

Recall that $\mathbf{A}(\mathbf{x})=\frac{\mu_0}{4\pi}\int\frac{\mathbf{J}(\mathbf{x}')}{|\mathbf{x}-\mathbf{x}'|}dV' $ hence for current density that is parallel with $\hat z$ the vector potential can have only one component and be parallel with the same, there cannot be a $\phi$ component. Furthermore, even if that were not the case, i.e., $\mathbf{J} \ne J_z \hat z$, when $\mathbf{J}$ is confined within a bounded region the integral and thus $\mathbf{A}$ must go to zero as $|\mathbf{x}|\rightarrow \infty$, and no constant non-zero component allowed. A standard example where $\mathbf{J}$ is not confined to a finite region is the problem of an infinite linear current and its field: the vector potential is still parallel with the line current but does not go to zero as $|\mathbf{x}|\rightarrow \infty$, in fact it is independent of z.

In a few words, it's because the vector potential is a polar vector, so it can't depend on the right hand rule. But if you give it a $\varphi$ component you have to pick one direction or the other, and the right hand rule is the only thing that can give you a preferred direction.

More explicitly, being a polar vector means that it changes sign under inversion of the coordinates. Under an inversion, the point $M$ goes to its antipodal opposite, and the dipole flips around. You can then reverse that with a 180º rotation, bringing the point $M$ back to its original position, rotating $\mathbf{A}$ with it, and making the dipole point upwards again. Since the source (the dipole) is back where it was at first, the potential must be the same. But if $\mathbf{A}$ points in the $\varphi$ direction, it will flip around after this inversion-rotation process! The only way out is for $A_\varphi$ to be zero. And note that this doesn't apply to any $r$ or $\theta$ components: they stay the same after inverting and rotating.

The fact that the vector potential is a polar vector is crucial. The magnetic field is an axial vector, and if instead of a dipole you had a small piece of current, you could certainly have a $B_\varphi$ component. In fact that's all you can have: the above argument implies that we must have $B_r = B_\theta = 0$.

Why is $\mathbf{A}$ a polar vector and $\mathbf{B}$ an axial vector (or pseudovector)? Let's start from the basics: the position vector $\mathbf{r}$ of a particle is a vector (i.e. polar vector) basically by definition, so the velocity, acceleration and hence force are also vectors. Also, here comes the crucial point: given two vectors $\mathbf{a}$ and $\mathbf{b}$, their cross product $\mathbf{a}\times\mathbf{b}$ is a pseudovector. You can verify this explicitly by just looking at what happens to everything under an inversion of the coordinates, but the deep reason is the right hand rule: it changes to a left hand rule after inversion. Similarly, the cross product of a vector and a pseudovector is a vector, and the cross product of two pseudovectors is a pseudovector.

Now look at the Lorentz force

Not the answer you're looking for? Browse other questions tagged electromagnetism magnetic-fields potential gauge-invariance dipole or ask your own question.

4
Force from point charge on perfect dipole
0
Show that the electric dipole term vanishes for a particular current
2
Does the Ampère-Maxwell law fail for the field of a uniformly moving point charge?
2
Momentum eigenfunction for non-vanishing vector potential
2
Line integral of a point charge
1
Motion of charged particle in uniform magnetic field and a radially symmetric electric field
0
Confusion about magnetic vector potential