Unit confusion - How Pressure and Volume combines to Joule

Imagine some helium in a cylinder with an initial volume of $1$ liter ant initial pressure of $1$ atm. Somehow the helium is made to expand to a final volume of $3$ liters, in such a way that its pressure rises in direct proportion to its volume. Calculate the work done on the gas during this process, assuming there are no other types of work being done.

I want to compute work done during quasistatic compression. I do get the correct integral, where the formula is

Can someone show me how to get the correct answer?

When you specify units of L for volume and atm for pressure, then when you say $P(V)=V$, what you're really saying is $P=kV$ where $k=1$ atm/L. Let's keep track of this constant as the calculation progresses.

Now it's clear that you need to convert from atm$\cdot$L to J. Based on your information,

which gives you your correct answer.

I think the issue of units has already been addressed. There are, however, issues with the problem statement itself and how to determine the work involved.

or, expressing pressure as a function of volume,

meaning, for an ideal gas, the pressure varies inversely with volume if the temperature is constant (an isothermal process). It can not vary directly (linearly) with volume.

But the problem statement does say "somehow" the helium is made to to expand to its final pressure and volume. "Somehow" leaves open the possibility of a sequence of processes to take the gas from its initial to final state such that the average value of the work done is 400 J.

It is possible, on the other hand, to have a series of such constant volume and pressure paths that are small enough to follow the linear relationship. An example is the "staircase" of processes shown in the diagram. The average work done is 4OO J since the area enclosed by the constant volume processes above the line equals that below the line. The smaller the steps become, the closer the sequence approximates a straight line. 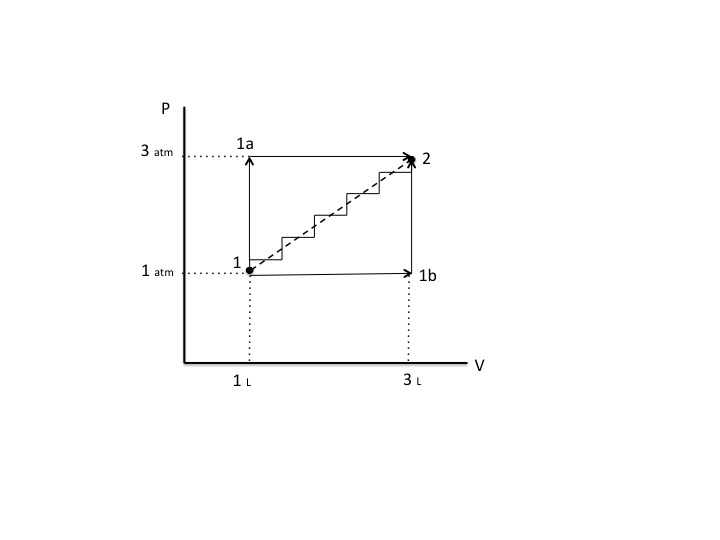 Not the answer you're looking for? Browse other questions tagged thermodynamics units si-units unit-conversion or ask your own question.

0
Calculate the change in the helium's energy content a process

1
Behavior of gasses, ideal and otherwise
0
Calculate Difference In Volume Using Specific Volume
1
How do I determine the amount of water in a sealed container to create a given pressure?
0
Quasistatic and Reversible processes
1
How can one calculate work produced by a flow?
0
Work done by a heat engine given thermodynamic cycle
0
Calculate the change in the helium's energy content a process
2
How does the author identifies the irreversible process coming from the pressure difference?