Why does nobody ever consider the possibility that the universe is not smooth?

Disclaimer: I'm not an astronomer, physicist, mathematician, etc. so this is a question from a complete newbie.

One of the greatest mysteries of our age is "where is the dark matter?" The universe can be observed to be curved (aka have gravity) in many places where we cannot detect any sufficiently large mass nearby.

There are many hypotheses about this, but one I've never seen discussed is that the universe simply isn't flat by default. The assumption always is that gravity is the only thing that curves the universe, and that without any mass there will be no curvature. But what if it isn't true? What if in it's "default state" the universe isn't smooth and flat, but has some random curves anyway, just like that?

Of course, this is just another hypothesis, but my question for this site is - Why doesn't it seem that anyone is considering this possibility?

It seems I haven't explained myself clearly enough. To put it in analogy - mass & gravity are often depicted as objects weighing down on a sheet. 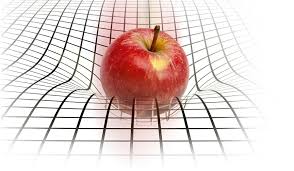 Dark matter is the same, except we cannot see the "apple". The bend is there, but there's nothing in it. We can see other objects attracted to it, gravitation lensing works as expected, etc. But nothing there when we look at it directly. It's like an invisible apple.

And my question is - why do we assume that the "sheet" is smooth by default? That there cannot be bends in it without apples. Or, in other words, yes, we know that mass causes gravity, but why cannot gravity ( == bends in spacetime) also exist without mass?

Added 2: It's also quite possible that my pop-sci level understanding of gravity is way off and I'm asking nonsense. In that case, I'd like to understand what I'm missing.

People do consider something like what you propose: essentially, we can put your theory under the more general umbrella of "what if there's no dark matter, it's just that gravity works differently?". After all, the curvature of spacetime is gravity, so you're proposing that gravity is not like we think it is, rather, that it can exist in regions without matter to source it.

The problem with these theories is that as far as I know, none of them can explain all the observations as well and as simply as dark matter can. I like this Reddit comment that outlines all the big pieces of evidence for DM: you can see that it pops up everywhere, in different regimes, leading to effects that would be quite hard to explain otherwise.

Regarding your theory in particular, maybe it could work. You just assert the existence of "pockets" of gravity where we observe them to be, with no need for a source. The problem with this is that it's not predictive, and it doesn't really explain anything. Where do these pockets come from? Why do they move around exactly as if they had matter in them? Just saying they exist and washing your hands is not very satisfactory: that's not why (or how) we do science. And if they act exactly as though they were sourced by matter, how do we distinguish this theory from the usual dark matter theory? Wouldn't DM be simpler?

The only way I can think to salvage the theory is to come up with a consistent mathematical theory of "self-sustaining" gravity, and see if you can work out a probability distribution for the appearance of these gravity wells, taking into account the expansion of the universe and all that. But cosmology is a self-consistent model: the speed of the expansion of the universe is affected by DM, so you have to take that into account somehow. And people have been trying and failing to do this for many years now.

If true, that would be a massive change in the way we understand space.

Currently, there is no "there" in space. You cannot specify a location "in space". You always have to refer to other objects to define location, distance, etc. Space itself has no dots, nor does it have privileged places. You can't grab a marker and draw lines on it. If space changes in any way (curvature, etc), it's always due to matter/energy bending it.

Basically, space is not a thing. It's just a background where relations such as distance are known to exist.

What you're proposing is space with local features. Suddenly, space has privileged places, that are made privileged not by matter/energy. That would be a very, very different thing.

I would tend to be very skeptical of such a view, simply based on Occam's razor. The current model is simpler. But, of course, if you could make testable predictions and those would turn out to be true, then evidence would force everyone to change their view.

Not the answer you're looking for? Browse other questions tagged cosmology spacetime universe curvature dark-matter or ask your own question.

12
Does (it make sense to say that ) the universe has a center?
6
If the universe is full of dark matter, why is it only 2.73 K cold?
1
Why is the possibility of the universe having a centre around which everything orbits not considered feasible?
8
How could we know that the relativistic curvature of universe is intrinsic?
1
Can we measure dark matter's effect on spacetime?
1
Curvature of spacetime in Friedman cosmological models
3
Does spacetime bending contradict the universe following euclidean geometry?