I've often wondered if a gas cylinder is connected to a hob (say, or a boiler or whatever) and someone turns the knob to allow gas to flow, why is that when a flame is held to light the gas it isn't possible for the newly lit gas (i.e. ignited gas) to travel back through the pipe to the source, hence igniting the gas in the cylinder?

Is it because the gas is held at pressure, so that the gas escapes the pipes with pressure and somehow burns “outward”, rather than returning down the pipe?

A gas flame is essentially a (chemical) reaction front, a (thin) layer in which a hydrocarbon (e.g. methane) is oxidised acc.:

This oxidation reaction is colloquially known as burning or combustion. It's obvious from the equation the combustion needs requisite amounts of oxygen, $\text{O}_2$, coming from the air which contains about $20$ percent of it.

However, in order for the reaction to be viable, the ratio of combustant to oxygen, here:

must fall within certain limits. Too much $\text{CH}_4$ and combustion is not possible. Similarly too much $\text{O}_2$ and the reaction does not proceed.

The ratio is optimal in the reaction front, but not outside of it. Inside the pipe there's not enough oxygen to sustain combustion.

There is also such a thing as a reverse (or inverse) flame. In this video, oxygen burns inside a propane atmosphere: 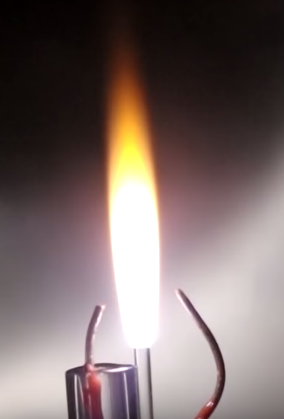 Photo above: oxygen burning in propane.

Below for comparison, propane burning in air: 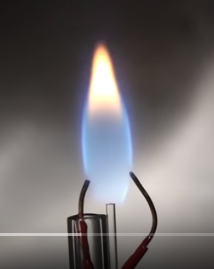 Gert explained why the flame can't travel back into the cylinder (because there's no oxygen). However, that actually doesn't explain why the flame doesn't travel into the burner itself, because burners (in particular Bunsen/Teclu burners, but hob/camping burners as well) actually pre-mix the gas with air inside the burner tube, but still it only burns outside!

The reason this works is that the burner output forms a flame arrester. It is made of thermally conductive metal, which keeps the gas that streams out of the burner openings cool. Moreover, the holes of some (most? not sure) burners are terminated with a bit of wire mesh, which also prevents heat front from eating “into the interior” of the gas stream. And the gas, even when mixed with oxygen, can only burn at sufficiently high temperature. Normally the flame sustains this temperature by its own exothermic reaction, but by seeping away that heat sufficiently fast is is possible to prevent burn in the tube.

The reason to pre-mix gas and air is that it leads to a cleaner – no soot – and also hotter flame.
Share
Improve this answer
answered Sep 9, 2019 at 10:06

Combustion requires the ratio of fuel and oxygen in the air to fall within a specific range, which is different for different types of fuel. There are different cutoff points for ignition, for sustained burning, and for deflagration. Too far from the gas source, there's not enough gas to burn. Inside the pipe, there's too much gas and not enough oxygen.

I'm assuming that you are talking about pre-mixed burners. If you have no pre-mixing of the gas with oxygen/air, the answer to your question is trivial: No combustion without both burnable gas and oxygen. However, all good burners use pre-mixing: The gas is mixed with air in a separate mixer before it enters the actual burner. And for those, the answer is no that trivial.

The trick of pre-mixed burners is, that every combustible gas mixture has a certain flame speed. If the gas mixture moves faster than this flame speed, the flame front is basically blown away with the mixture.

Now, when you put a combustible gas mixture through a tube at a speed that exceeds its flame speed, and let it exit this tube, tiny vortexes will be created at the edge of the gas stream and the gas at the edges will be slowed down by the surrounding air. This slowdown in combination with recirculation of hot gases by the turbulences allows the flame front to attach to the edge of the tube, and then eat its way progressively into the unburned mixture flow. In other words, the edge of the tube acts as a flame holder.

Flame holders may be constructed in different ways: They may be simple wire meshes (some stoves), or they may be tube edges (typical cooking stoves), or they may be more elaborate like vortex combustion chambers (blow-torches). But they all operate on the same principle that the flow-rate of the pre-mixed gas is faster than its flame speed, making it impossible for the flame to enter the openings of the gas supply backwards.

The wikipedia article on pre-mixed flames seems to have more details on this.

(Btw, that's why every gas stove has a certain minimum flame size: If you regulate a gas stove down too much, the speed of the mixture becomes lower than the flame speed at the flame holder, and a flash-back occurs. Stove designers don't want this for obvious reasons, so they construct the valves to avoid this condition.)

Not the answer you're looking for? Browse other questions tagged everyday-life gas or ask your own question.

1
Why buckets have rims curled outwards?
15
Tree vs lightning rod: why does one burn and the other not?
4
Does a gas canister change temperature as gas is released?
1
Why does breakdown voltage increase with pressure in gas insulators
4
What are the relevant macroscopic variables for a 'bitgas'?
1
Why do titled matchstick burn with higher flame intensity?
0
Why does the average kinetic energy of particles in water involve the gas constant?