A question from an example from a MIT Classical Mechanics Lecture on Work. 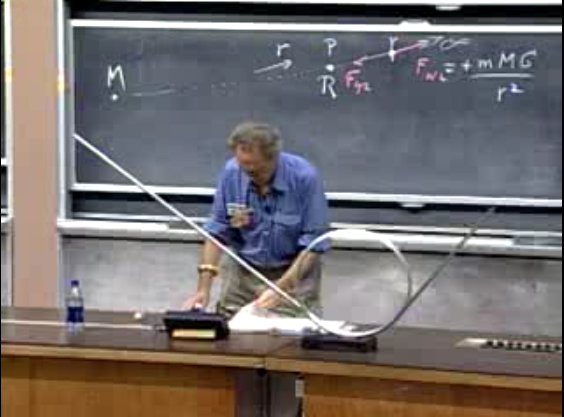 He is not measuring "The Force" to bring an object from infinity to P, because there is no singular force. There's an amount of work done, yes, but it doesn't make much sense to phrase it as "the force to move an object from A to B".

The integral does have a negative value. Lets evaluate it.

So, as you can see, the integral evaluated to a negative value.

Maybe you're having a problem with the definition/workings of definite integrals? For example, one might ask, "If we're summing up an infinite number of infinitesimal quantities $\frac{GMm}{r^2}dr$ which are all positive, how do we end up with a negative value?" The answer can be viewed as saying $dr$ takes into account the direction which you integrate in. So: it's already handled for you.

Gravitation would be driving the mass from $\infty$ to your point $P$, so according to the definition you gave, no work needs to be done by Mr. Lewin to accomplish that. It's actually more like "the work that I have to do to bring that mass from $\infty$ to that point $P$, and have it stay there", with the highlighted part being equivalent to "moving at a constant, infinitesimally small speed". So your negative work is actually done in preventing the object from accelerating towards the point it is being pulled to.

Not the answer you're looking for? Browse other questions tagged gravity work potential-energy or ask your own question.