How to visualise the motion of a wave moving on a string as observed by moving in the same direction and with the same velocity as the wave?

I am a High School student and was reading Wave Motion and Waves on a String from a popular Indian textbook of Physics, "Concepts of Physics" by Prof. HC Verma.

In the derivation of a wave velocity on a string,the author asks one to visualise the condition as follows:

Tried to find animations which can help me with the visualisation by searching keywords but couldn't find any.

If anyone can post a relevant animation or simplify the extract for me and make it easier to understand,it would be of great help.

Sorry if this is an obvious or easy-to-understand extract. I am generally good at English,but I think failure to understand the extract para properly has somewhat to do with English not being my first language.

Instead of the string imagine that there is river and on the water there are some water waves which are moving relative to the shore.

Here is an animated gif of surfers riding a tidal bore with the water waves travelling from left to right.

Now look carefully at the gif in the region enclosed by the red rectangle below with the surfer $a$ abd the shadow of a tree $b$.
The surfer is moving with the water wave and hence the shore and the shadow of the tree is not moving relative to the shore. 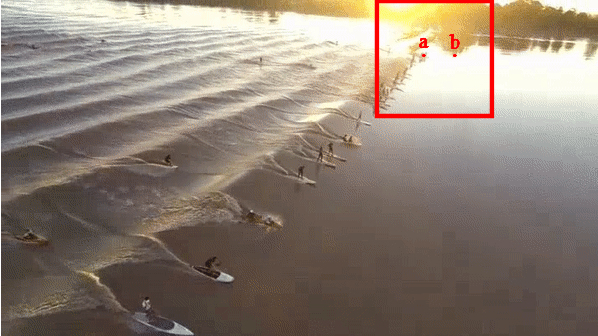 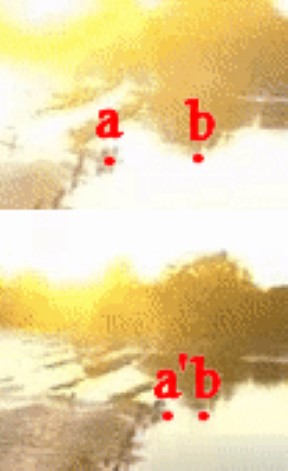 You now have to imagine what the surfer observers.

The surfer observers the shadow of the tree moving towards her, ie the shore / on the shore / the string are moving from right to left.

Not the answer you're looking for? Browse other questions tagged newtonian-mechanics waves or ask your own question.

5
Does space have to be filled with charged particles to carry electromagnetic waves?
2
Intuitive explanation of the waves superposition
0
Is there no way to create an arbitrary wave on a string fixed at two ends?
0
Confusion in understanding the derivation of wave speed from Newton's Second Law
2
In which-pattern does the individual-particles move in a longitudinal wave?
5
What are waves? Where does the wave equation come from?
0
Shouldn't reflection at the boundary interfere with the original wave to not give any wave?
2
How do particles in a longitudinal wave transfer momentum after the initial impulse?