Assume a single ray of unpolarized light propagating through an opaque medium (water). Due to absorption and Rayleigh scattering the intensity decreases and light gets scattered/diffused before hiting the ground. Attenuation by absorption is given by $$I = I_0 \exp(-\mu_{att}\cdot l_{depth}).$$

But, how does the light intensity profile on the ground, including scattering, look like? Formula?

Edit: Think the solution might be derived from this.

Unlike attenuation, scattering is difficult because energy which is scattered out of the beam can be scattered back in. 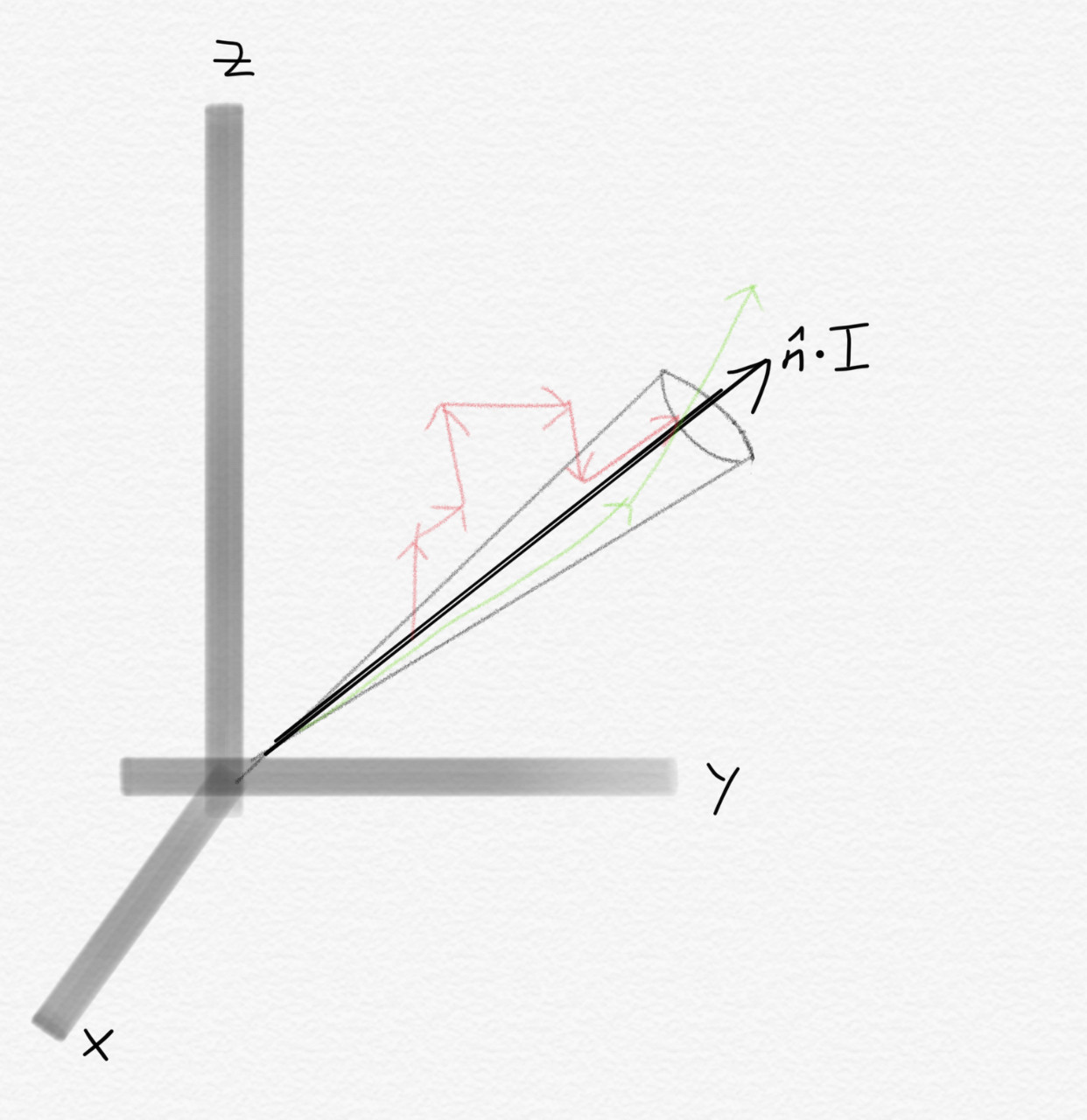 If scattering coefficient is very weak over the path length of interest, or the scattering strongly favours small angular deviations, (green path in diagram) you can add the scattering and attenuation coefficients together to estimate the intensity at the end location, and use the Beer-Lambert law,

Obviously, this only holds provided that light scattered out of the beam does not return. You will need to determine if this holds for your purpose, or not.

In reality, there will always be in-scattering, and these effects can be strong (see red path in the diagram).

So the full answer is that you need to solve the radiative transfer equation. Assuming you can ignore any heating effects, and you just want to know about attention of the beam, you can set the emission coefficient to zero and find the solution of,

However, there are whole books written on this topic. You will probably want to make some sort of simplification such as the two-stream approximation.

OP is asking about source functions in scattering atmospheres.

Take a look at Chandrasekhar’s book, Radiative Transfer. Here is a screenshot which discusses the form of the source function for scattering atmospheres. 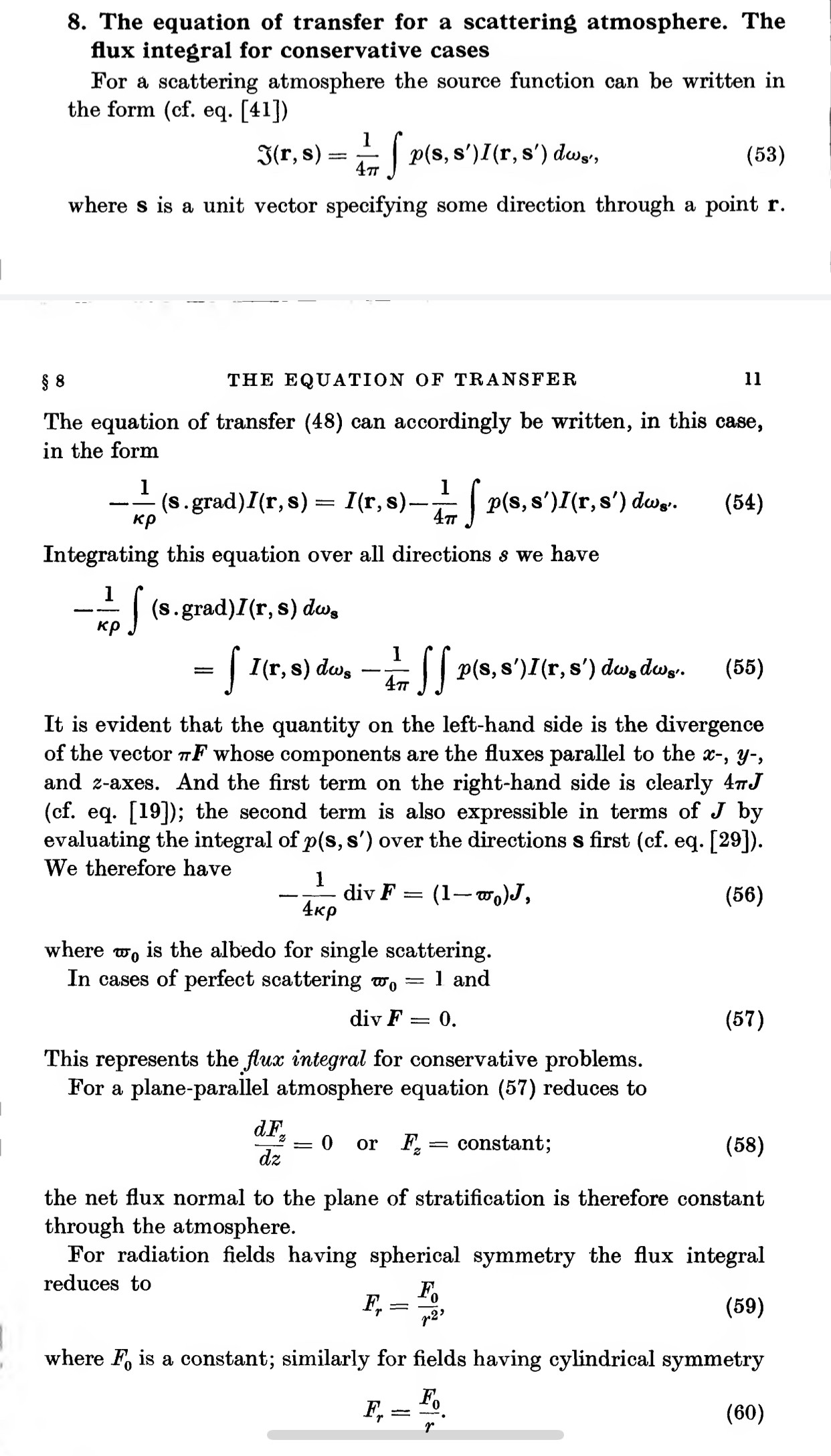 Derived from the Radiation transfer eqn. one has the so-called time-stationary Photon Diffusion eqn. (which is the screened Poisson eqn.)

The singularity in $(x,y) = o$ makes sense. Infinite intensity in a point does not mean an 'infinite amount' of light similar as for a probability distribution (like Beta distr.). The intensity of a single light ray (without any effects) is given by a Dirac delta. 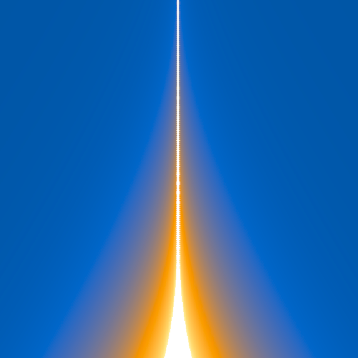 Not the answer you're looking for? Browse other questions tagged optics scattering refraction differential-equations diffusion or ask your own question.

0
Rayleigh scattering and dimension of oscillator compared to wavelenght
4
Probability that a photon has suffered its last scattering
0
Rayleigh Scattering, Atmosphere-Dependant
0
Dynamic Light Scattering based o Rayleigh or Mie theory?
2
Path difference between scattered x-rays
4
How much blue sky comes from each altitude; dependence of atmosphere's dielectric constant and isothermal compressibility with altitude?
0
Rayleigh Scattering VS Raman Scattering