Ask Question
Asked 4 months ago
Active 4 months ago
Viewed 75 times
-3
$\begingroup$
This question already has answers here:
Why is the Carnot engine the most efficient? (3 answers)
Closed 5 months ago.

Why is the efficiency of Carnot engine regarded as the maximum efficiency possible for a heat engine?

Because you can prove that if there were a more efficient engine then it could be used, in conjunction with a Carnot engine, to bring about a net result that breaks the 2nd law of thermodynamics. One could, for example, transfer heat from one body to a hotter body without requiring any net work to be done.

The proof is based on making a heat engine using the impossibly efficient one. It can be found in any basic thermodynamics textbook. I would guess it's in wikipedia too.

There are several statements of the second law that would be violated by a heat engine being more efficient than a Carnot engine. @Andrew Steene mentioned transferring heat from a cold body to a hot body without requiring any net work to be done. That would violate the Clausius' statement of the second law, or:

The example I give below applies the Kelvin-Plank statement of the second law:

No heat engine can operate in a cycle while transferring heat with a single heat reservoir.

COROLLARY: No heat engine can higher efficiency than a Carnot Cycle operating between the same reservoirs

The example described below illustrates violation of the Kelvin-Plank statement and its corollary.

Refer now to Figure 2. We replace the Carnot heat engine with a "super efficient" engine, that is, an engine more efficient that the Carnot heat engine, and use it to operate the Carnot refrigerator. To be more efficient than the Carnot engine, our super efficient engine will produce more work out for a given heat in $Q_H$. We will call the total work output $W + dW$. Since more of the heat into the engine produces work, the engine therefore rejects less heat to the low temperature reservoir. We will call the heat rejected $Q_{L}-dQ$ where, for conservation of energy, $dQ=dW$. Part of this work, $W$, is used to operate the refrigerator, as in the case of Fig 1. The rest, $dW$, is available to be used for some other purpose.

We see that our super efficient heat engine still complies with the first law. But let's look at the overall result of the super efficient engine operating the refrigerator.

CONCLUSION: The combined effect of the supper efficient heat engine operating the Carnot refrigerator is to take heat $dQ$ from a single reservoir, $T_L$ and produce an equivalent amount of work, $dW$. This is in violation of the Kelvin-Plank statement of the second law. Therefore, no heat engine has a greater efficiency than the Carnot heat engine. 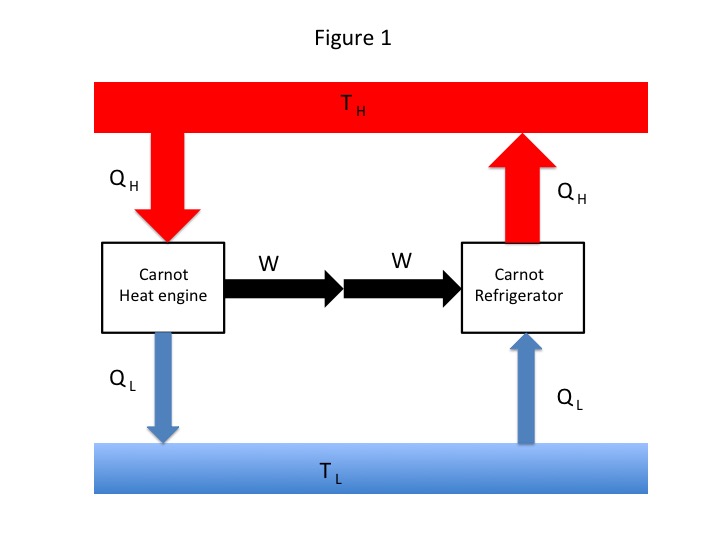 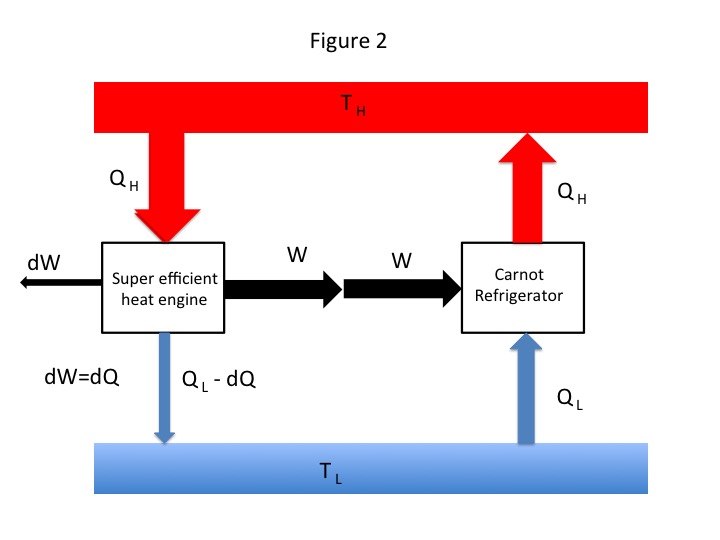