Forces on a small point on a string 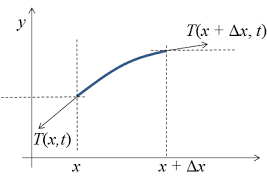 I had just started to study Tension deeper when I ran into diagrams like these. I was wondering why the tension force worked on opposite sides rather than at one point? What would happen if they did instead work on only one point? I’ve hardly studied Newton’s third law but I thought the forces came from the same point.

Welcome to our site!

In this sort of diagram we are considering a small finite extent of the string at some place which I will call $x_0$ over some fixed distance $\Delta x$: in other words it occupies the interval $(x_0, x_0 + \Delta x).$ Typically such a string is also describing some graph $y(x, t)$ at some time $t$.

The fact that they work from different locations does in theory mean that they will torque, or twist, the chunk of string. In theory they also might move its mass along the $x$ axis. But generally for this sort of problem those effects will be ignored from the beginning, and only if you are very lucky is there some discussion about how they might be neglected in this limit as $\Delta x \to 0.$ Probably the ignore-the-torque argument is justified; probably the ignore-the-longitudinal-motion argument is not. But the basic problem is that if I allow for longitudinal motion of my finite elements in the $x$ axis then I am also modeling longitudinal vibrations along that axis; these then become a strange set of alternate harmonic oscillators which are being coupled to the original string, possibly for the sake of modeling dissipation or so. But if we want a clean model of just the transverse vibrations $y(x)$, then it makes sense to ignore those aspects of reality.

2
What is the “inner” force behind attracion/repulsion?
1
Forces and motion (Newtonian)
3
Linear thermal expansion from statistical mechanics?
16
Pulley system. Why do I need to put a minus sign?
10
How does the force of tension really work?
0
Forces on a bob on a string
0
Tension in a string with unequal forces
4
Tension in a massless string being pulled at its ends with unequal forces
0
Change measuring point of forces and moments