1)An object of mass $m_1$ is on a movable cart of mass $m_2$, coefficient of friction between the object and cart is known.If a force $F$ acts on the object and it's not strong enough to overcome the friction, then the acceleration of the cart and the whole system is $a=\frac{F}{m_1+m_2}$.
However, if the force is strong enough to overcome friction, the acceleration of the cart is actually equal to $\frac{F_{friction}}{m_2}$.How does friction affect the cart and where is mass of the object ($m_1$)?I don't remember any textbook telling this about friction forces.

2)Similar example but external force is now gravitational force.This time the cart is sloped.The force acting on the sloped cart isn't just due to friction between the cart and object, but due to the resultant force acting on the object that is on the slope (sum of gravitational force and friction force).Why is second (gravitational) force considered in this example but not in the previous one (first example considers only the friction but not the force $F$).

In the first case, if static friction has been overcome, then kinetic friction acts forward on the cart and backward on the object, which must be considered separately. In the second case there is a normal force from the object acting on the cart. This is caused by a component of gravity in that direction acting on the object. This normal force has a horizontal component acting to the right. The kinetic friction force acting on the cart has a horizontal component acting to the left. In the absence of other external forces, the resultant of these two accelerates the cart to the right. In the static case, the resultant would be zero. Note that if the object is sliding down the incline, its direction of motion is not parallel to the surface of the moving cart, which must be used as the basis for an accelerating frame of reference.

Case 1- How does friction affect the cart and where is mass of the object ($m_1$)?

In order for $m_1$ to slip on $m_2$, the applied force $F$ must exceed the maximum static friction force, or

The kinetic friction force is acting backwards on $m_1$ and forwards on $m_2$.

From the free body diagram below for $m_2$ we see that the only force acting on it, assuming no friction between the cart and the ground, is the friction force that $m_1$ exerts on $m_2$. Therefore the acceleration $a_2$ of $m_2$ is

So you should see from the free body diagram on $m_2$ below that it is only the friction force that is responsible for accelerating $m_2$, and mass $m_1$ is taken into consideration because its weight bearing down on $m_2$ is the source of the friction force on $m_2$.

Case 1- Why is second (gravitational) force considered in this example but not in the previous one (first example considers only the friction but not the force $F$).

The answer to the previous question should answer this. As already discussed above, gravity was considered in case 1 because it contributes to the friction force on $m_2$. You just need to substitute $F_{friction}=μm_{1}g$ where $g$ is the acceleration due to gravity. But the downward force of gravity in the first case has nothing to do with the force $F$ applied horizontally to $m_1$. In the second case, the force $F$ as well as the friction force, are functions of the gravitational force. 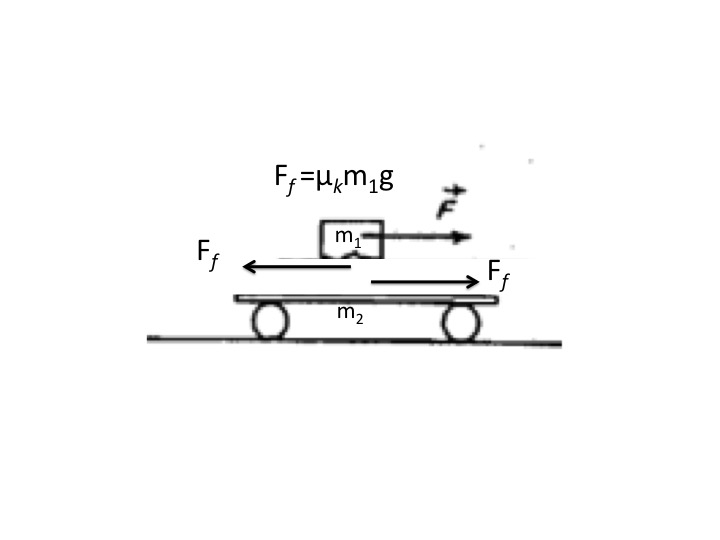 2
Why is static friction omitted here? And comparison with this problem on Newton's second Law. Solutions are all provided
2
Pushing, inertia of a cart system
2
Ball flying towards me - Newton's third law is violated?
3
Can this friction be ignored?
2
Working out frictional force
1
2 block friction problem