After spending some time in the lab and finding out how frustrating it is to align optical elements, I have decided to go and adapt a numerical solver that I wrote to simulate the propagation of a Gaussian beam through some lenses.

For simplicity I will consider only the 1-dimensional case. The propagation is simulated by solving the PDE

My approach after having the phase is as follows. I define the Gaussian beam, propagate it, and whenever I feel like it, I should be able to apply a phase which would correspond to "adding a lens in my setup". For simplicity of the debugging process, I considered the Gaussian beam on which I applied the lens phase in order to have the initial condition for the PDE.

What I noticed by doing so is that the width of the Gaussian beam changes the position at which the beam focuses. I think that this can be seen best by comparing the following images. 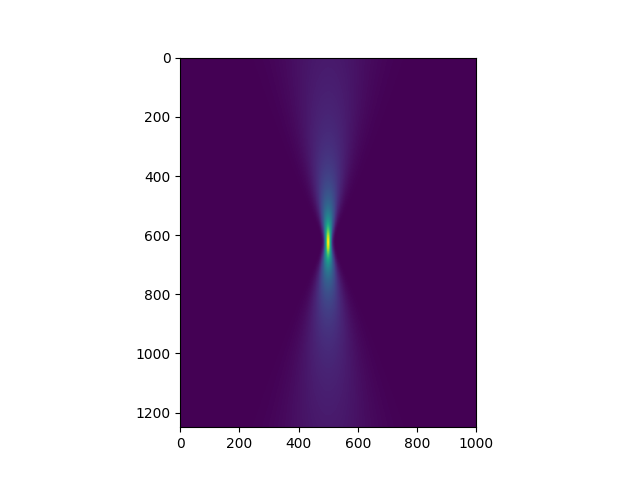 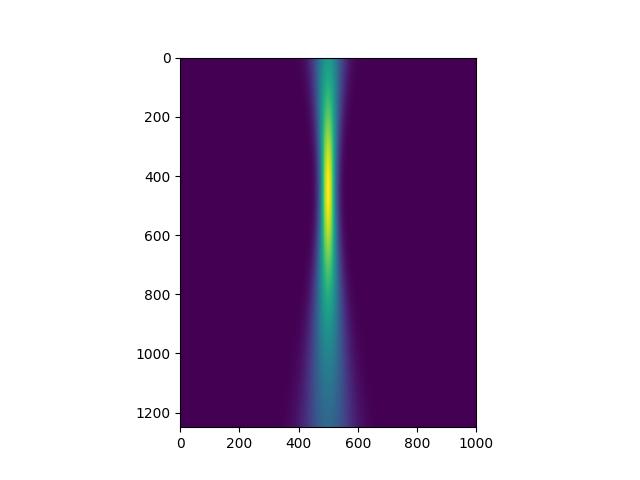 In the first image I have considered a Gaussian with a standard deviation 3 time larger than in the second case. Based on the parameters that I have used in the simulations, the focal point should be around the 625 iteration on the vertical axis. This is true for the first image, but not for the second one.

Furthermore, by choosing even smaller standard deviations for the Gaussian, the focusing doesn't even take place (qualitatively).

So, how can this be explained or controlled? My attempt is that given the propagation equation (directional, small angles), a parallel beam hits the lens, which should apply a Fourier Transform on the beam (or the inverse, I don't recall at the moment). By doing so, a narrow Gaussian is transformed into a wide one when applying Fourier, and a wide on becomes narrow. Based on this, if the input Gaussian is made narrower, its Fourier transform should start to become wider. This explains why the focusing does not appear, but not the shift along the propagation axis of the focus. I am not sure if this explanation is correct, but definitely it is not complete. What am I missing here?

This is a real effect. See these ray trace simulation.

Focal length of the lens is defined with parallel input rays.

The focal point of the beam changes as the divergence changes (and with distance of light source to the lens - not shown).