I have a question on co-moving and synchronized reference systems. I read the corresponding section (97) in Landau/Lifshitz's second book "Field Theory" on it. In particular it is said that space filling matter cannot be in rest in such a system except in case of dust-like matter with pressure $p=0$. This is the case I am interested in. Because further on in section 103 of Landau/Lifshitz a solution of Einstein's field equations (EFE) is discussed with just this assumption. Would an observer in such a system observe all surrounding collapsing particles in rest with respect to him? What is with the shells/layers of dust above and below the observer? Don't they experience a different acceleration towards the point where everything is collapsing to?

I also seem to have an example of matter moving a comoving synchronized system. A Robertson-Walker metric seems to describe a comoving synchronized system of the cosmic matter in the universe. If cosmic matter would not move WRT such a system, how would it be possible to notice the expansion of the universe ? So if matter apparently moves in such a system, what distinguishes it from a simple rest frame of single chosen particle (participating in an expansion or a collapse) while the other particles of the matter distribution move with respect to it ?

Another feature I strongly wonder about is the fact that points observed in such a system keep staying on geodesic lines have the same time-coordinate (the eigen-time) according the definition of the synchronised respectively co-moving reference system:

Nevertheless -- using again the example of the expanding universe -- 2 galaxies of large distance among them would have a different time due to their relative motion due to the cosmic expansion. Another example are particles participating in a gravitational collapse which is also described by a synchronised/co-moving reference system:

1) What means "co-moving" ? Is it meant to be only locally or even globally ?

You need to be clearer about the distinction between coordinates and measured quantities. Coordinates are just a map, and like a map of the world, they contain scaling distortions described by the metric.

Here is an illustration of a comoving coordinate system for an FLRW universe with positive curvature. 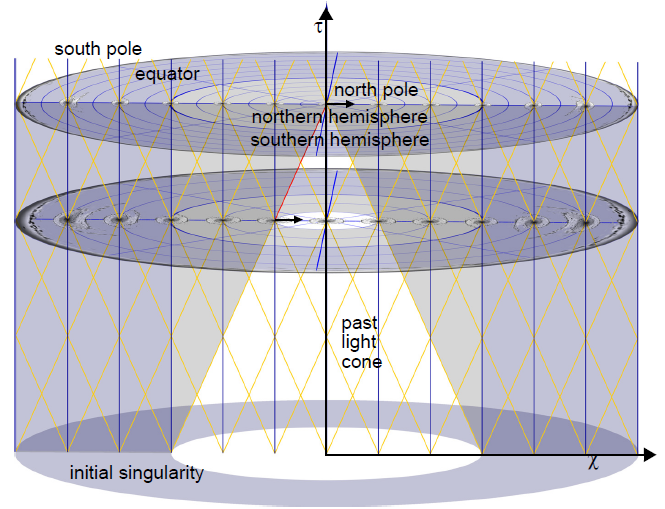 The galaxies on geodesics maintain constant position in these coordinates, but the scaling means that they appear to shrink over time so that distances between them increase (this is exactly equivalent to saying that the universe expands relative to local distances). Time is a function of cosmic time - time as measured by each galaxy from the initial singularity. In this diagram the time axis has been scaled so that radial light speed is a constant.

The meaning of $\chi$ can be seen for positive curvature by wrapping the map at constant time around a sphere, which also shows that the centre of the map is arbitrary and makes clear the geodesics determined by symmetry. $a$ used to be known as "the radius of the universe" 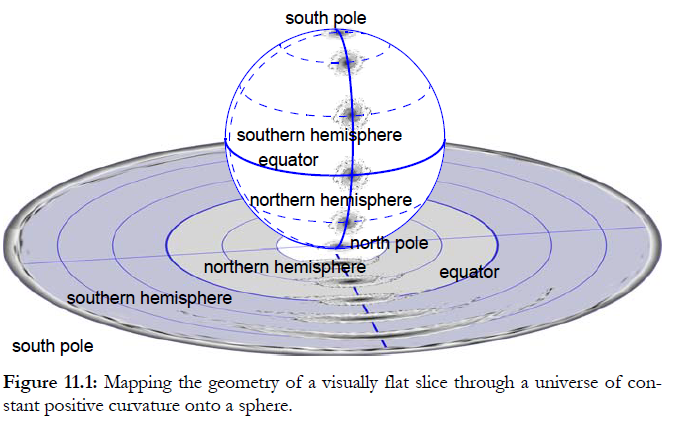 If cosmic matter would not move WRT such a system, how would it be possible to notice the expansion of the universe ?

Observationally we see the light is redshifted so this is caused by the expansion of the universe. Other theories such as static universe or tired light theory has been ruled out. And you can show that in a static matter-filled universe (which you described) the static universe is at unstable equilibirium.

So if matter apparently moves in such a system, what distinguishes it from a simple rest frame of single chosen particle (participating in an expansion or a collapse) while the other particles of the matter distribution move with respect to it ?

3
Are questions about "when" an event outside the visible universe occurred meaningless?

7
Difference between proper and comoving frames
7
Is isotropy a fundamental/invariant feature of our universe, or is it merely a convenient, albeit arbitrary, feature of some reference frames?
9
Will a uniformly charged universe expand? Isotropically?
2
Why CBR and Comoving coordinates are not absolute reference frames?
0
Do the comoving observers agree on the cosmic time?
1
Nature of motion between comoving observers; What is the common time that they agree on?
0
Comoving coordinate system
3
Difference between cosmic time and our earth time we use everyday. What is the exact difference?