What causes an aircraft to roll when rudder is applied

When continuous rudder is applied in a typical light aircraft during straight and level flight at "normal" flying speeds and altitudes, the primary effect is that the aircraft will yaw to the left - so it's flying "sideways" to some extent.

It is commonly understood amongst pilots that the secondary effect in most aircraft, is that the aircraft will also start rolling in the direction of yaw (i.e. applying left rudder causes left yaw, and left roll).

What causes this roll? And does the Dihedral angle have anything to do with it?

Rody and Mike almost got it right. :)

Most aircraft are designed with swept wings. That is the primary mechanism that gives the roll effect to an airplane that may only receive a yaw input. if you look at this picture:

You can see that both wings have a backwards sweep to them. Now, if you introduce a yaw to the aircraft, one wing will extend out more directly into the wind-stream, while the other wing will be even more swept. This effectively makes one wing longer, and the other wing shorter. Like in this image (this image is actually displaying a more extreme case that also involves boundary layer separations, but that is beyond this answer): 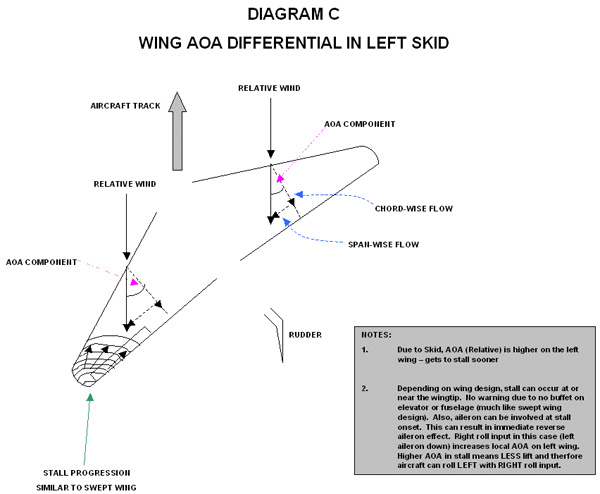 Actually, this picture displays it exactly as I was taught in USAF flight school::

The longer wing will generate more lift, and the shorter one will generate less lift. And since there is unequal lift around the roll axis, the airplane will roll, and continue to roll.

Of course, with more lift comes more drag, so that will counter the lift and pull the wing back (Causing an effect known as "Dutch Roll"). Many aircraft have a device called a "yaw damper" to counter this (or else you will feel quite queasy flying). Dutch roll is demonstrated by this GIF:

The reason that Mike's answer is not totally correct is from Figure 2 in his wiki link. Note that the words "non-zero" are included in this diagram: 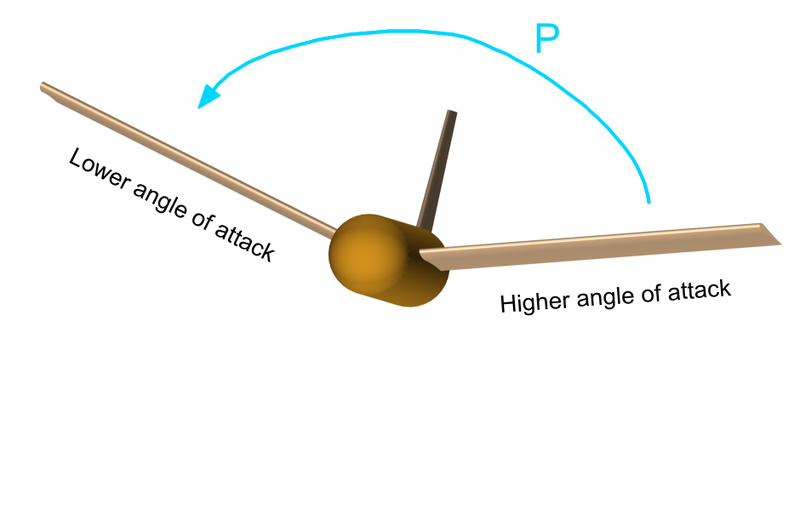 That means that theoretically, if one were able to yaw an aircraft with dihedral perfectly, the aerodynamic forces would not be the causal factor. Also, most aircraft that have a dihedral or anahedral configuration also have a wing sweep, so that is the overall factor that is at play.

I want to replace my former answer with this one.

The on-line book by John S. Denker has a very good chapter on this subject.

He outlines a number of reasons why there is slip-roll coupling:

There's quite a few factors at play here, and granted, it's been a while since my last flight dynamics class :)

After a few iterations with the other answerers below, here is a (still not yet complete) list of reasons the effect will occur:

Not the answer you're looking for? Browse other questions tagged aerodynamics aircraft or ask your own question.

5
Why do aircraft inner wings lose lift when turning?
4
What happens when a supersonic airplane flies through a cloud?
9
Turning an Airplane. What actually causes the circular motion in a banked (roll) turn?
1
Is airspeed constant or cyclical when flying model aircraft in windy conditions?
0
When an aircraft flies over, glass window vibrates...Infrasound?
3
Roll angle for banked turn of an aircraft on a tilted plane
5
What causes the air speed difference above and below the wing of a plane?
2
What is the purpose of the roll maneuver on a rocket?
0
How to derive the bank angle of an aircraft from its roll angle and pitch angle?