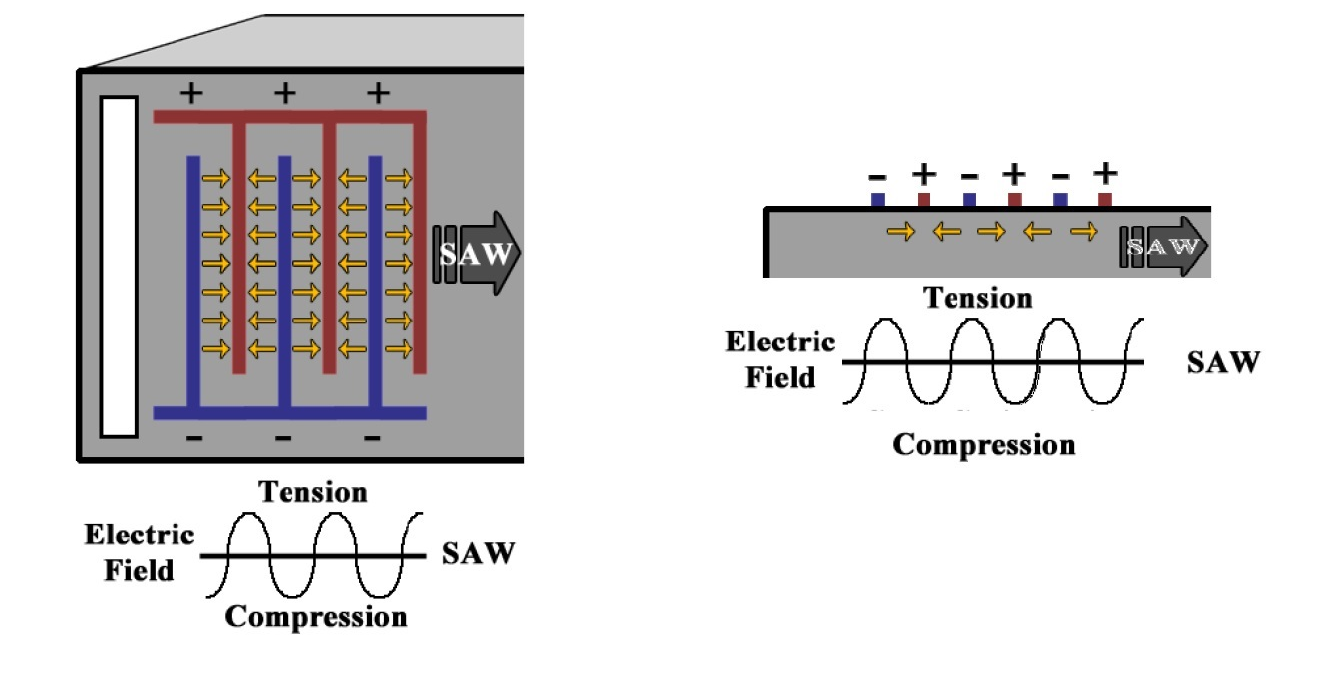 What happens is as an oscillating electric field is applied is creates area of tension and compression as the piezoelectric substrate response to the changing field.

I am trying to understand the distribution of the potential across the IDTs. And to then work out what the potential may be if I was to strain the material in a wave pattern.

So for instance if 10 V is applied to the IDT set, and the IDT set has 10 finger pairs (20 fingers total). The potential difference between each of these finger pairs is 10 V. And the corresponding electric field would cause the material to strain proportional according to its d33. If the surface wave travels an opposite set of IDTs and we assume no losses along the path, only those due to the electro-mechanical coupling efficiency. Let's say the output wave peaks at 0.1 V as the travelling wave completely overlaps the output set of IDTs for example.

First question, what happens if I reduce the number of IDT finger pairs (for both input and output) to 5, (10 fingers total) for the same potential? The potential difference is the same between the fingers. Should I expect to have the same 0.1 V output peak? Or would it be reduced corresponding to the number of finger pairs?

I thought it may be reduced according to the number of finger pairs. Because the potential will be the sum of the peak and troughs of the travelling wave as it passes the corresponding output IDTs for the piezoelectric effect. The surface wave launched at the input (10 V) should have the same strains independent of the number of pairs, as the potential between the pairs is the same. But the output will have a lesser amount of changing potential across it to sum. So if the wave peaks are the same, but is shorter there are less potential differences.

What I am unsure about is that in my thoughts I am treating the input as a single potential difference, uniform between each pair the same as the input voltage. As I do not see the potential breaking down and dividing between the fingers as its applied, as they are a part of a single electrode. But I am treating the output as a summation of smaller voltage differences. This is to fit waveform I see at he output gradually build up to a peak with increased overlap of the travelling wave. Below is an image of a single pulsed, or wave packet as it travels across the IDTs. Gradually building up and then fading. Where the wave packet completely overlaps the IDTs is where the peak occurs. 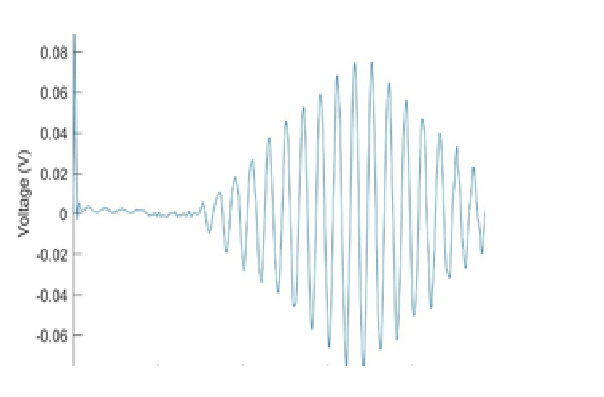 I think I am misunderstanding something here, as it doesn't quite seem right to me.

The second question, what about a situation where I mechanical induce the surface wave and want to calculate the voltage at the output IDTs. 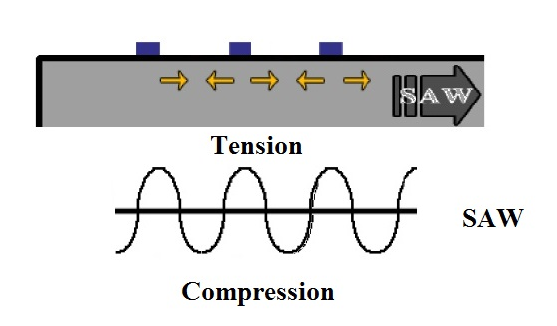 I have a material that I can actuate, which will strain in the manner illustrated. Again assuming no losses as the wave travels, only those from the coupling. How would I work out the potential I receive at the output IDT?

I know the material will strain x parts per million, and with the material properties I can work out how much this stress this will cause on the piezoelectric substrate. And hence the strain experienced by the piezoelectric substrate. Then using the electro-mechanical coefficient for strains along the surface (d33, I think), I could work out the potential change for this strain. However this is typically, as I've seen it, for a single area of stress/strain.

How do I take into account overall potential for the length of a number of waves passing over a number of IDT fingers? This is why I have outlined the first question. I am unsure whether it is a summation of all the peaks and troughs of the wave or something else that hasn't occurred to me. Whether treating the input and output IDTs differently as I mentioned in the first question is correct.

Browse other questions tagged waves potential piezoelectric or ask your own question.

7
How is it possible for an Ultrasound device to correctly interpret a negative density change in tissue?
1
Piezoelectric polarity
4
Why do we ignore magnetic field vector during polarization?
0
Piezoelectric effect and area