Definition For Internal Energy Of An Ideal Gas

We know that the internal energy for an ideal gas depends only on its temperature.

What confused me was the correct defination of the internal energy for the ideal gas.

Here is what I did:

Our control mass system is taken as the whole container as shown by dotted lines in the figure.

Since the container is insulated and the displacement work is zero (container is rigid), we get $\Delta U = 0$ for our control mass system for the process. 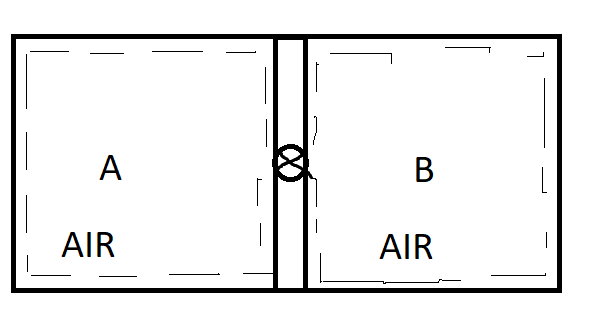 We can consider $2$ ways of proceeding:

If we define $U$ as $U=nC_vT$ and proceed which would result in:

So which defination is correct?

Internal energy is adittive quantity per subsystems, this implies that constant k vanish. First definition is correct because as you says na and nb was changing in time

Based on the open system (control volume) version of the first law of thermodynamics, the correct equations for the changes in internal energy of the gases in the two chambers in the thought experiment are:

Not the answer you're looking for? Browse other questions tagged thermodynamics energy definition ideal-gas or ask your own question.

3
Simple thermodynamics basics - can internal energy be calculated?
3
Container divided in two parts with ideal gas
1
Determining the final state of the gas in the tank
0
Filling of a gas in a cylinder
0
Work done by an ideal gas in an adiabatic free expansion
1
What does the work term mean when analyzing a ideal gas and spring system?
1
Adiabatic expansion, irreversible, in a container?